Synopsis:  Academy Award® winner Denzel Washington and Mark Wahlberg lead an all-star cast in 2 Guns, an explosive action film that tracks two operatives from competing bureaus who are forced on the run together. But there is a big problem with their unique alliance: Neither knows that the other is an undercover federal agent. For the past 12 months, DEA agent Bobby Trench (Washington) and U.S. naval intelligence officer Marcus Stigman (Wahlberg) have been reluctantly attached at the hip. Working undercover as members of a narcotics syndicate, each man distrusts his partner as much as the criminals they have both been tasked to take down. When their attempt to infiltrate a Mexican drug cartel and recover millions goes haywire, Trench and Stigman are suddenly disavowed by their superiors. Now that everyone wants them in jail or in the ground, the only person they can count on is the other. Unfortunately for their pursuers, when good guys spend years pretending to be bad, they pick up a few tricks along the way.

Some movies run pretty much on star wattage alone, and ‘2 Guns’ is one such perfect example. Built on the undeniable chemistry between Denzel Washington and Mark Wahlberg, this throwback to the anarchic playfulness of the 1980s and 1990s buddy cop thrillers (think ‘Lethal Weapon’) is in fact derivable and ultimately forgettable, if not for the sheer fun one gets from watching two pros trade quips at each other.

Adapted from the BOOM! Studios series of comics written by Steven Grant and drawn by Mateus Santolouco, this rather faithful big-screen version has Washington playing DEA agent Bobby Trench and Wahlberg as naval intelligence officer Stig Stigman, neither one aware of the other’s undercover identity. To complete their respective missions, they have been tasked to rob the Tres Cruces Savings & Loan, a fiduciary establishment where the ruthless Mexican drug cartel leader Manny "Papi" Greco (Edward James Olmos) they are trying to apprehend stores some of his money.

But what was intended as a simple grab-and-run job becomes way more complicated when the $3 million they expect to be stashed in the vault turns out to be $40 million more, which brings on their heels everyone from the Mob to the military to the CIA. Indeed, besides Papi, a whole host of supporting characters are on their tail, including Stigman's superior officer Lt. Cmdr. Quince (James Marsden) and psychopathic CIA agent Earl (Bill Paxton) - otherwise introduced in the movie as ‘God’s S.O.B’.

Quite unusual for a film of this nature is its twisty plot - culled from five of Grant’s graphic novels - which screenwriter Blake Masters uses to pile on the intrigue with double, triple and quadruple crosses. The labyrinth of plot isn’t as clever as it would have you think, but Masters confidently navigates the turns without ever confusing his audience or giving away too much to expose the gaps. It does however get increasingly preposterous - especially with Trench and Stigman’s all-too convenient escape after breaking into a naval base - and quite nearly goes off the rails as both American military types and government agents descend on a Mexican ranch for a final shoot-em-up.

That scene though is probably the only worthwhile action setpiece that Icelandic director Baltasar Kormákur stages. Clearly working within the confines of a limited budget, Kormákur strains to give his film a measure of summer-movie action - what with making a big deal out of a chase scene where our two protagonists are in the Mexican desert on a Ford pickup and Ford Bronco respectively - but cannot quite shake off the feeling that they have been done and executed much better. Even by the standards of his earlier Hollywood debut ‘Contraband’ (which also starred Wahlberg), much of the action here falls short, conspicuously lacking in energy or suspense.

But like we said at the start, this is a movie that rises and falls on the shoulders of its two leads. Relishing the opportunity to invigorate the genre, both Washington and Wahlberg pack plenty of style and attitude in their anti-buddy roles. The most enjoyable parts are not derived of bullets, but rather of banter, as both actors riff and tangle with each other over as weighty matters as how to rob a bank and as trivial matters as what to order for breakfast. It is the company that makes a lot of difference, and the two A-list actors simply knock it out of the park.

Though Wahlberg’s comedic gifts are not new (he did after all star in one of the most successful R-rated comedy hits last summer, ‘Ted’), his talent for off-the-cuff gab truly shines here. Not only is he often called upon to lace the action with witty touches, Wahlberg gets to be an unusually self-effacing presence here keeping up a front as a compulsive flirt who cannot resist winking at the ladies. Next to Wahlberg, Washington is relatively subdued, but the often serious-minded actor provides a perfect foil for the former’s talkative self.

Sadly, the rest of the movie hardly matches up to the quality of the pairing between Washington and Wahlberg, whose combined charisma provides all the ammunition that this action flick needs. Yes, more than the gunplay or the surplus of violence meant for the fanboys, it is these two stalwarts that lift the movie from its mediocrity, the combination of two of the most reliable, relatable Hollywood action heroes worth the price of admission alone. 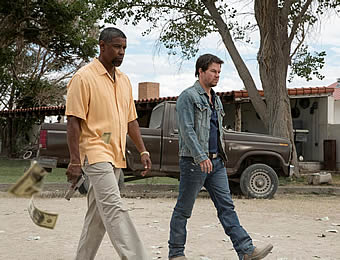 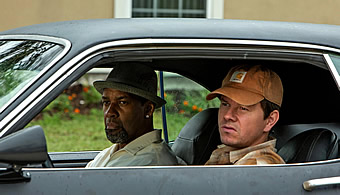 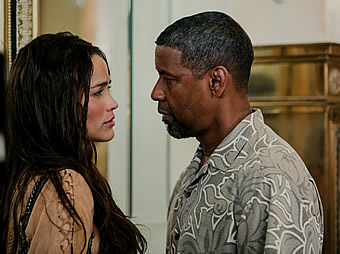 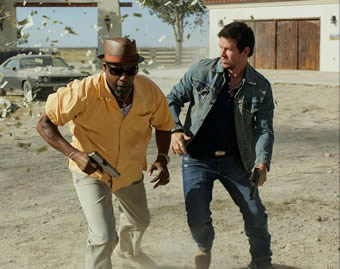