Synopsis: Set during the warring states period in ancient China, Shin is a war orphan who dreams of becoming the greatest general under heaven. One day, he has a fateful encounter with a young man Eisei, the true heir to the Qin kingdom throne. Together, they seek to reclaim Eisei's throne and unite the Warring States under a single banner. KINGDOM is the live-action adaptation of the manga series of the same name.

KINGDOM is a live-action adaptation of the manga series of the same name, which is a fictionalised story of Shin and Eisei (or better known to us as Qin Emperor aka Qin Shi Huang) during the warring states. This action adventure narrative follows Shin (played by Kento Yamazaki) and Hyou (played by Ryo Yoshizawa), who were sold as slaves to the same household. Despite being in a dire situation and environment, Hyou and Shin aspires to be the greatest general on Earth.

The film opens with Shin crossing path with Ouki, one of the greatest generals of their time, en route to the household that he was sold to. At that household, he found company in Hyou, who is also a fellow slave worker. The dynamics and bond between them was just as close as brothers, and they share the same dream of breaking out of their slave class by becoming the greatest general. Hence they spar with each other every day to develop and hone their swordsmanship, in hopes of achieving their dream. One fateful day, a general working for the emperor, Sho Bun Kun, encountered Hyou and wanted him to work for Qin. Hyou took up the offer, but only to land himself in a misfortune. He then came back to the village to look for Shin, and ordered him to look for Eisei.

The narrative of the movie is interesting as its story is somewhat based on Chinese history. Even for the uninitiated, the fictional story of the beginnings of how Eisei (Qin Emperor) wanted to rule the warring states was actually inspiring. This journey of Eisei reclaiming his throne from his half-brother was accompanied by Shin and Ka Ryo Ten (played by Kanna Hashimoto), and ally Yotanwa (played by Masami Nanagawa). The movie hardly has any dull moment, and has a great mix of sad and humorous scenes. The progress of the story was also easy to follow.

The character development and personality reveals were engaging and good too. The progress of how Shin grew from a stranger to being able to trust Eisei, and even supporting him in becoming the first king to unify the warring states was a great watch. The characters distinct and dynamic, with characters like Ouki (played by Takao Osawa) and Seikyo (played by Kanata Hongo) deserving a shoutout as well.

Even in the aspect of action choreography, this movie aced it. Both Kento Yamazaki and Ryo Yoshizawa nailed their respective roles. As Shin was self-taught, his actions are more freestyle, and are pretty unique. One of the highlights, as shared by Kento Yamazaki when he was in Singapore, would be Shin’s showdown with Saji (played by Sakaguchi Taku). The action sequence is coordinated by Yuji Shimomura, who was also involved in other manga-turned movies like Inuyashiki (2018) and Bleach (2018). On the other hand, Ryo Yoshizawa’s character Eisei’s moves are more refined, and Ryo’s 10 years in kendo definitely helped him to accomplish his role.

Both Kento Yamazaki and Ryo Yoshizawa showed agility and flexibility as actors, not only with regards to action, but in acting as well. Kento might be more known for the typical Shojo manga male lead roles like in Wolf Girl and Black Prince (2016) and One Week Friends (2017), but his role as Shin totally broke away from that mould. It’s almost unbelievable that this is his first proper action movie role. Ryo Yoshizawa, who plays two roles in the movie, also excelled. One of the highlights which showcases his acting is when Hyou meets Eisei. He plays both characters, and it seems almost effortless for Ryo to be snapping into the two different personalities, with the change of expression in his face and eyes.

What’s lacking though, was the CGI. In one of the chase scenes with the army riding on horses, the CGI simply made it look like a cheap production, and came across as cheesy. There were also some transitions between scenes which looked weird and awkward, e.g. bottom left corner to top wipes. This two-month long shoot shot in Japan and Xiangshan Film and Television Town in China, had many picturesque scenes though.

While it’s not that all perfect, it’s not often to see a movie with so many likeable characters and a good enough villain, owing to the great casting! Coupled with the onscreen chemistry between Eisei and Shin (it’s in fact Ryo and Kento’s fourth time working together!), there is nothing not to like!

(So good that you’ll wish for a sequel by the end of the movie!) 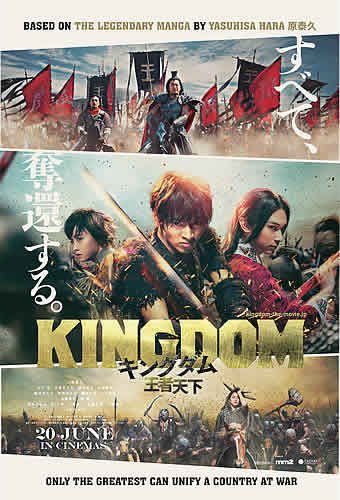 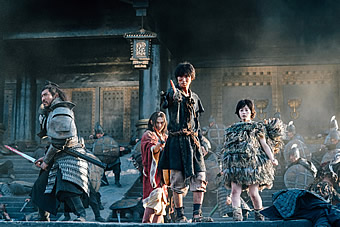 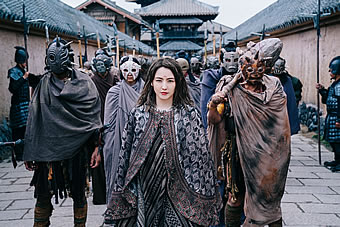