Let’s be honest, you probably wasn’t expecting the pudgy likeable star of the raunchy Apatow comedies “Knocked Up” and “Pineapple Express” to become a superhero someday, but that’s exactly what Seth Rogen has done in the latest Hollywood big-budget vehicle, “The Green Hornet”. And hey, you know what, he’s perfectly aware that he isn’t exactly what you might call ‘superhero material’- though he also would also have you know that his big-screen incarnation of what begun as a radio series in the 1930s is not your typical superhero movie.

“When I and Evan [Seth’s co-writer] approached the project, we thought it would be great to take the buddy action-comedy movies of the 80s like Lethal Weapon and Midnight Run and Beverly Hills Cop and try to apply that type of feel to a superhero movie,” said Seth. “To us, that had never been done before. There were a couple, but none of them were good or successful at all, and so we thought if done well, it could be very original and exciting for people to get a chance to go see.”

Seth was in town with his co-star Jay Chou and director Michel Gondry to promote the US$120mil superhero movie which opens in cinemas this week. The Canadian-born comedian, who has seen his star rising in Hollywood in recent years, turned out just as amusing in real-life with his self-deprecating humour as his onscreen characters. Case in point? He says he knew he had to lose weight [13 kg to be exact] to play the Green Hornet- else the movie would have to be called “The Green Bumblebee” instead. 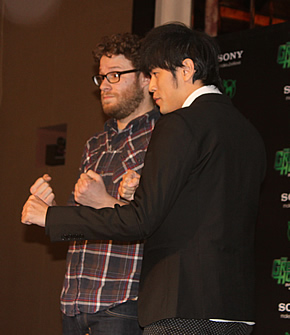 Not only did Seth reinvent the ‘superhero movie’ wheel with “The Green Hornet”, he also turned the titular character into an unlikely superhero. “A lot of superhero movies start off with a guy who’s already kind of like a superhero- Christian Bale as Batman or Tobey Maguire as Spiderman starts out as a guy who’s noble and morally centred,” Seth elaborated.

“We thought it would be interesting to get rid of all that stuff and start off with someone who is as least like a hero as you can possibly imagine, and have him be not very talented or physically capable and morally not even very well-centred at the beginning- and I think I offer all those things in spades,” said Seth, drawing an immediate laughter from the crowd of journalists. “To us, it was a much more interesting story to show that kind of person becoming a hero.”

Juggling both the acting and writing responsibilities on the film wasn’t easy- but Seth said that he found the scripting process to be much more difficult, a process which he said took him years. “It was kind of a negotiation of times with the studio as to how weird and subversive we could make things, and still have a movie that warrants the budget that it was given and potentially recoup that,” he said.

The star more accustomed to the R-rated mid-range Apatow comedies added, “It was very interesting creatively to make a movie for a much larger audience than most of our movies generally are. Somehow it actually worked and people are seeing it… and so I guess it was a successful experiment.” His unique take on the material was what attracted French auteur director Michel Gondry to step outside his comfort zone and attempt his most commercial and expensive movie to date.

“I wanted to make the Green Hornet for a long time- in 1996, I tried to make it exist but it didn’t work out,” said Michel, who looks uncannily like an older version of ‘The Social Network’ star Jesse Eisenberg. “When Seth asked me again, I really liked the new version of the script, and also I wanted to make it for my son to watch it, so I said yes.” Michel took over the reins after popular Hong Kong comedian Stephen Chow bowed out of acting and directing the movie, just one in many stars (including Mark Wahlberg, Jake Gyllenhaal and George Clooney) who have once circled the material.

Chow was supposed to have played Kato, the Hornet’s sidekick, and a role which was made famous by Bruce Lee in the 1960s TV series. Replacing Chow is Jay Chou, whose brand of cool Seth calls “awesome”. According to Seth, he and Jay first read the script together over Skype and were so pleased with the results that they decided to meet up in person in Los Angeles.

“It was pretty clear from the beginning that all the areas I was confident and capable with like improv and lip-synch, Jay had less experience with, whereas he was confident with looking cool which I had no experience in, so we instantly complimented each other very well,” he added. And indeed, despite the obvious language barriers, it was clear that Seth and Jay had a nice easygoing rapport between them- Jay joking about how ‘it was easy’ punching Seth up shooting the extended fight scene between their respective characters after Seth spoke about it matter-of-factly.

For the multi-hyphenate celebrity, Jay likens shooting his maiden Hollywood movie to ‘a vacation’, citing the bigger budgets, longer shooting schedule and the anonymity which he does not usually get to enjoy in Asia. While learning his lines in English wasn’t easy, he said his greatest challenge was in fact living up to the legacy that Bruce Lee had left playing Kato. “We wanted a different Kato in this movie, a more realistic character compared to what Bruce Lee had played,” he explained.

Of course, Jay’s efforts have been amply rewarded- rare is it that an Asian sidekick actually steals the limelight from the main attraction, but that is precisely what Kato ends up doing. Seth however has no qualms about that. “This image of a White dude being helped out by someone who is a racial minority was always very strange to me,” he said.

“Our goal of the movie was to show that in fact this guy’s job is not just to support the White guy, but is actually a whole person who has feelings and would probably be very insulted that everyone just expects him to be a sidekick,” added Seth. “So we wanted to state that this guy was in fact a hero in a lot of ways, and as far as stereotypes go, we were trying to expose it, rather than perpetuate it.”

After all, as Jay pointed out, most people actually remember Bruce Lee as Kato rather than the actor who played the Green Hornet. That should already be fair warning that ‘The Green Hornet’ had the potential to be more than just your typical superhero movie- but in the hands of someone like Seth Rogen, you can bet that it definitely won’t be.