Synopsis: From the studio that brought you "Shrek," "Madagascar" and "Kung Fu Panda." Po is now living his dream as The Dragon Warrior, protecting the Valley of Peace alongside his friends and fellow kung fu masters, The Furious Five - Tigress, Crane, Mantis, Viper and Monkey. But Po's awesome new life is threatened by the emergence of a formidable villain, who plans to use a secret, unstoppable weapon to conquer China and destroy kung fu. It is up to Po and The Furious Five to journey across China to face this threat and vanquish it. But how can Po stop a weapon that can stop kung fu? He must look to his past and uncover the secrets of his mysterious origins; only then will he be able to unlock the strength he needs to succeed. Movie Review:

Things haven’t changed much: Po is still a panda, and he still lives in China. The only change since we last saw him in 2008 is that he’s now known to mere mortals (i.e. the anthropomorphic animals populating ancient China) as The Dragon Warrior.

This simply means that he is occupied with saving China from evil baddies. However, our overweight hero still finds time to contemplate about his origins, and he finally plucks up the courage to ask his goose father (we thought he was never going to do it) where he came from.

No, the villains won’t take a vacation just because Po is busy finding out more about his past. In fact, a deadly peacock is planning to take over the whole of China (yes, the plan is that ambitious) and annihilate Kung Fu (we don’t exactly see the link, but anything goes in the name of fun and laughter). Hence, it is up to our bumbling Kung Fu master to save the day.

And you can bet that by the end of this 100 minute sequel to the hit DreamWorks Animation, the day is saved.

The filmmakers must have quite a big budget to work on this movie, judging by the dazzling visuals (check out the fireworks!), the mesmerising action sequences (check out the big sets and falling buildings!) and the stunning flashbacks (check out the impressive dream like 2D images!). The scenic backdrops are as picturesque as Chinese paintings, and the radiantly luminous 3D effects are so visually appealing that you feel like you are part of Po’s motley crew. Watch out for the climatic finale where ships charge through a small town into the seas – it is definitely one of the most impressive animated sequences we have seen.

The remarkable animation is complemented by an affecting storyline which centers on family. There are a few moments (which are rather rare in other DreamWorks franchises like Shrek and Madagascar) which we actually felt for Po’s character. The oriental themes of finding inner peace and letting go of the past are also nicely tackled in the story, without being too kitschy.

Kudos to director Jennifer Yuh Nelson who took over the baton from the first movie’s John Wayne Stevenson and Mark Osborne. You can call it the female instinct, but amidst all the busy fighting and yakking (no thanks to Jack Black’s fast talking Po, of course), there is a charming tenderness and warmth which made things a little fuzzier compared to the last movie.

The lines are also wittily crafted, thanks to the screenplay by Jonathan Aibel and Glenn Berger. The energetic pacing is complemented by a glitzy score composed by Hans Zimmer and John Powell.

As for the cast, who would say no to be part of this successful franchise? Which is why, Black is back with Angelina Jolie (as Tigress), Seth Rogen (as Mantis), Lucy Liu (as Viper), David Cross (as Crane), Dustin Hoffman (as Master Shifu, Po’s trainer) and James Hong (as Mr. Ping, Po’s goose father) in this sequel, reprising their roles as the now famous characters (get ready to make big money with those action figures, toy manufacturers and fast food chains!). They have also brought along Jean Claude Van Damme to play an alligator warrior, Michelle Yeoh to play a goat soothsayer and Gary Oldman as a peacock villain. While Van Damme is somewhat underused (he is a quintessential action movie stars in his heydays after all), we are pleasantly surprised with Yeoh and Oldman’s performances here. You can almost feel the two actors’ presence just by listening to them speak their lines.

We are also happy to report that Hong Kong action superstar Jackie Chan has more lines this time round as the agile Monkey warrior. So how’s that for a celebration? Bring on those dumplings and noodles!

(We want Po and The Furious Five to be back for a third time!) 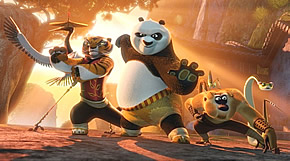