Synopsis: DireIn Red Dawn, a city in Washington state awakens to the surreal sight of foreign paratroopers dropping from the sky - shockingly, the U.S. has been invaded and their hometown is the initial target. Quickly and without warning, the citizens find themselves prisoners and their town under enemy occupation. Determined to fight back, a group of young patriots seek refuge in the surrounding woods, training and reorganizing themselves into a guerilla group of fighters. Taking inspiration from their high school mascot, they call themselves the Wolverines, banding together to protect one another, liberate their town from its captors, and take back their freedom.

There are big, loud and dumb movies, and then there are movies like ‘Red Dawn’, which deserve to belong to a category in themselves for being sheer stupidity magnified. The fact that this was in fact a remake of a 1984 movie that starred the likes of Patrick Swayze, C. Thomas Howell, Charlie Sheen and Jennifer Grey is no excuse for how blatantly silly the premise is – if you’re looking to give it another go, the least you can do is to try to make it better.

For those who have not heard of that John Milius picture, its essential conceit was how a ragtag group of teens become a formidable resistance force when their peaceful community is suddenly attacked by an occupying force. The Russians were the ones unfortunate enough to be vilified then – not surprising given the lingering Cold War fears – but writers Carl Ellsworth and Jeremy Passmore have made the North Koreans the invaders this time round, though any real world relevance the opening sequence of edited news footage might suggest the movie would have is quickly thrown out of the window barely ten minutes into the film.

After briefly introducing the audience to the pair of brothers – the newly returned Iraq War veteran Jed Eckert (Chris Hemsworth) and his hot-headed younger brother Matt (Josh Peck) – the North Koreans are literally dropped into the movie. Waking up the rumble of explosions, Jed and Matt are horrified to discover that the sky is dotted with North Korean bombers and scores of soldiers are parachuting into the town in a hostile takeover attempt. If it already sounds unconvincing as we are describing it to you, trust us when we tell you it looks even more ridiculous onscreen.

Are we supposed to believe that within the span of one night, the North Koreans have suddenly made their way halfway across the globe to attack America? Are we supposed to believe that they could have come with all that firepower? And worst of all, are we supposed to even buy into the fact that they would even bother about a small town called Spokane? Sure, we would willingly suspend our disbelief for a movie that bothers to make sense; but ‘Red Dawn’ makes no such attempt, and utterly baffles in how it thinks it can get away with such an absurd setup.

Does it get better along the way? Absolutely not. Seeing his father executed before their eyes, Jed comes to the conclusion that they need to prepare for war – and just like that, he becomes training commander of a young team of rebels who call themselves the ‘Wolverines’. They learn to fight, to shoot and to hide, all in the name of preparing to wage an urban guerrilla campaign against the North Koreans who have taken over their town with their arsenal of soldiers, jeeps, and tanks.

And when they are finally ready, Matt decides to undermine their plans by scuttling off to rescue his girlfriend Erica (Isabel Lucas), thereby igniting a brotherly conflict between the rational and responsible Jed and the impulsive and impetuous Matt. What a pathetic attempt at trying to make us care about two stock types who frankly are just in the movie so we have the good guys – the same goes for bringing Toni (Adrianne Paliki) and Erica into the fray and building some sort of romantic links between Jed and Matt respectively.

Even if we accept the tradeoffs in plot and character most B-movies would have their audience make, the least director Dan Bradley could have done is to mount some decently shot action sequences. That is precisely Bradley should have done with his cameraman Mitchell Amundsen – shoot him point blank. Clearly trying too hard to emulate the ‘Bourne’ films to lend the action a sense of urgency, the shaky camerawork is downright frustrating to watch, and even more so because the sequences – especially the final one set within a huge circular room fronted on all sides with glass windows – are pretty promising to begin with.

No thanks to its abundant flaws, the movie also wastes its promising young cast. Hemsworth has good presence as the smart leader of the team (he takes over Patrick Swayze’s role in the original), while Josh Hutcherson (who played Peeta in ‘The Hunger Games’ and here is in C. Thomas Howell’s role) brings naivety and temperance to the role of Robert Kitner, a bookish type who turns warrior because of circumstance. Less convincing is Peck, who mostly just looks too stoned to convey any sort of inner dilemma his character is supposed to face.

Nonetheless, the acting is the least of the flaws in a movie that is painfully illogical and utterly nonsensical. Its invasion scenario might have been able to fly with an audience in the ‘80s, but to try to transplant the same premise to today’s context is just plain daftness. Ironically, there are some moments that appear to suggest that the filmmakers are wise enough to know not to take the movie too seriously – but those moments fade away as soon as the next unabashed war-mongering scene arrives.

Don’t get us wrong – this isn’t about whether we love B-action movies or not. We do, but it is movies that insult the intelligence of its audience that we truly detest, and ‘Red Dawn’ is one perfect example of that. Watch only if you need to understand the meaning of stupid.

(Bad doesn’t begin to describe how terrible this action movie is – illogical, nonsensical and just plain dumb, this Dawn deserves never to see the light of day) 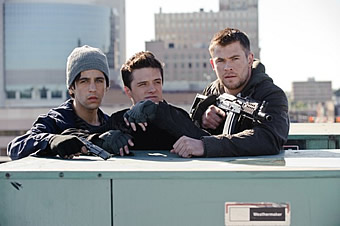 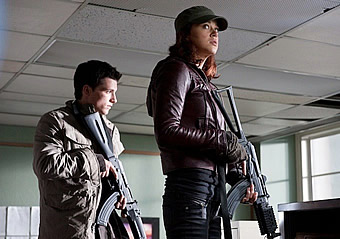