Synopsis: The title character of this adventure thriller, filmed in Europe, Hanna (played by Academy Award nominee Saoirse Ronan ("Atonement") is a teenage girl. Uniquely, she has the strength, the stamina, and the smarts of a soldier; these come from being raised by her father (Eric Bana of "Star Trek"), an ex-CIA man, in the wilds of Finland. Living a life unlike any other teenager, her upbringing and training have been one and the same, all geared to making her the perfect assassin. The turning point in her adolescence is a sharp one; sent into the world by her father on a mission, Hanna journeys stealthily across Europe while eluding agents dispatched after her by a ruthless intelligence operative with secrets of her own (Academy Award winner Cate Blanchett). As she nears her ultimate target, Hanna faces startling revelations about her existence and unexpected questions about her humanity.

Saoirse Ronan teams up with her Atonement director Joe Wright to prove that they each can fit right into the action thriller genre and can be as comfortable as they are in more period, classier films. One reaffirms her talent in tackling a more physically demanding role, while the other shows that his direction sensibilities are not lacking for a genre that has demanding fans who have seen just about every stunt pulled out of a hat.

Wright keeps things ambiguous in the beginning, opting to show the isolation of a father and daughter in Erik (Eric Bana) and Hanna (Saoirse Ronan) living off a snowy, forested landscape, feeding off Nature, until you realize that they're somewhat like the Kick-Ass father-daughter team of having tremendous abilities and training tucked under their belt as if to await that day of apocalypse. They speak multiple languages fluently, engage in martial arts, and have excellent weapon handling skills, all geared up for one big plan whose background is shrouded in mystery, and unveiled as we journey

Narratively the film follows two separate tracks, with the minor one being Erik's rather blase journey toward a rendezvous point in Berlin, while Hanna becomes La Femme Nikita in an assassination attempt which you would have already seen in the trailer, before we follow her adventures into the real world, where things she read about in books become real in front of her eyes, with wide eyed wonderment as she brushes with friendship, a fleeting though unlikely romantic opportunity, and possibly reaffirming what her dad would have told her about human nature in general.

And Saoirse Ronan nailed the titular role perfectly, still possessing enough to portray characters filled with a sense of innocence to the world around her combined with fish out of water experience, and that of a tough cookie able to give Chloe Moretz's Hitgirl a run for her money, minus that potty mouth. Her training paid off in genuinely passing off as someone drilled in offensive martial arts and close quarter combat complete with a mean looking streak, and balances that up perfectly to fit in a number of fairy tale themes courtesy of the Brothers Grimm through imagery that can be found scattered throughout the film.

While Bana was quite underutilized in his role he did have possibly one of the best sequences of the film, where Joe Wright just had to have a single, long tracking shot inserted somewhere, and became a continuous track of Bana's Erik through an airport terminal down to the subway before engaging in a high octane fisticuffs with a bunch of nameless goons, complete with a Chemical Brothers track to top it all off. The soundtrack completely done by the electronica duo is one of the chief reasons why anyone should sit through the film, and you'd wonder what took them so long before saying yes to coming up with a film's soundtrack.

Cate Blanchett on the other hand takes on a superbly acted negative role, as you'll feel the icy cool demeanour being constantly unfazed by threats and challenges put forth in her way, as she cold-bloodedly dispatches oppponents and even parties remotely associated with her quest at hand. Done in such stone-faced fashion, you can't help but to love to hate her Marissa character, a CIA operative with an agenda as always, intricately linked to the father and daughter team she and her goons are adamant in hunting down. Blanchett had her hand in tackling villainous roles before, but this is many notches above her Indy Jones role but at times still having her character here speaking in a strangely accented manner.

Hanna surprises at every turn, as one would come to expect something of a standard run of the mill action thriller, but it was anything but, being technically brilliant in its delivery oozing coolness as it does its Euro destination hops captured in dizzying angles and exotic landscapes, complete with a Grade A cast that anchors the film both on the emotional, and physical fronts. Recommended, and so is the soundtrack! 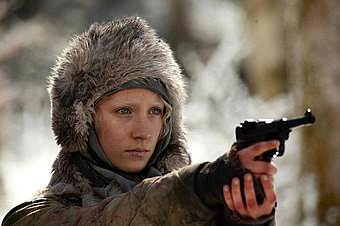 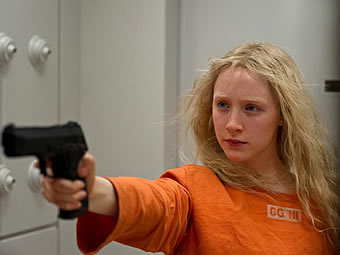