Synopsis: "Harry Potter and the Deathly Hallows – Part 2," is the final adventure in the Harry Potter film series. The much-anticipated motion picture event is the second of two full-length parts. In the epic finale, the battle between the good and evil forces of the wizarding world escalates into an all-out war. The stakes have never been higher and no one is safe. But it is Harry Potter who may be called upon to make the ultimate sacrifice as he draws closer to the climactic showdown with Lord Voldemort. It all ends here. Movie Review:

An incredible journey that began a decade ago finally arrives at its close with David Yates’ “Harry Potter and the Deathly Hallows: Part II”, as ‘The Boy Who Lived’ comes face to face with ‘He Who Shall Not Be Named’ in an epic showdown between good and evil. And what a showdown it is- tense, thrilling, breathtaking, and fitting of just about any superlative you can think of. Years of waiting and agonising as we watched our beloved characters go through trial after another, separation after another, and yes even death have brought us to this point- and Yates doesn’t disappoint any and every expectation you bring to the door.

Whereas the first instalment of the ‘Deathly Hallows’ emphasised the profound sense of loss and isolation among Harry, Ron and Hermoine as they journeyed on their mission of locating and destroying the Horcruxes (accursed objects containing fragments of Voldemort’s soul), screenwriter Steve Kloves and director Yates leaves behind the moody atmosphere of the previous movie for newfound immediacy  and urgency. This is all about that final battle where only one can live, and from start to finish- for once in a Harry Potter movie- the action is swift and relentless.

Part II picks up right where the previous film left off- the dark Lord Voldemort smiles in evil triumph as he steals the most powerful wand in the world, i.e. the Elder Wand, from the tomb of beloved Hogwarts headmaster Professor Dumbledore (Michael Gambon). The next shot is equally ominous- students are marched rank-and-file through a Hogwarts courtyard, watched closely by cloaked Dementors hovering over the school grounds. If there was any need of a reminder of the danger facing our three protagonists, these opening sequences should just about refresh one’s memory of what is at stake.

There is precious little time to waste, and the first we get to see Harry, Ron and Hermione, they are already hatching a plan to break into Gringotts to retrieve a Horcrux. Their break-in settles upon a plan of deception that allows for some rare moments of levity in the film, as Helena Bonham Carter gets to ham it up as a polyjuice-disguised Hermoine impersonating Bellatrix Lestrange. This being the first ‘Harry Potter’ movie in 3D, Yates caters for some distinctive thrills in the additional dimension with a roller-coaster ride through the vault, culminating in a daring escape on the back of a dragon.

But as readers of the book will tell you, the last stand happens back at Hogwarts, and true enough, after this thrilling early set-piece at Gringotts, the trio head back to the School of Witchcraft and Wizardry to confront their foes. It is also where the last Horcruxes are supposed to be, and Harry’s return to the once sunny and cheery grounds now besieged by darkness and doom becomes a true test of allegiance as Voldemort forces the students and staff to take sides and choose wisely. Courage is ultimately a quality that can only be seen when the circumstance calls for it, and fans will be glad that Kloves gives room for otherwise supporting characters to step into the limelight- in particular, Neville Longbottom (Matthew Lewis) emerges as one of the unlikeliest but also truest heroes on the side of good.

The Hogwarts stalwarts also get a chance to show off their magic, led by the wonderful Professor Minerva McGonagall (Maggie Smith) who mobilises an army of stone warriors to ward off the Dementors. This is the last we’d see these Hogwarts professors- McGonagall, Flitwick (Warwick Davis), Slughorn (Jim Broadbent)- as well as the members of the Order of the Phoenix- Molly Weasley (Julie Walters), Remus Lupin (David Thewlis), Kingsley Shacklebolt (George Harris)- and Yates gives each largely enough screen time for the heroic send-off they deserve.

Yet he reserves the most emotional moment in the film for Severus Snape’s (Alan Rickman) vindication, long thought to be the Judas Iscariot-equivalent in the Order and the one who pushed Dumbledore to his death. With a flashback montage triggered by Harry’s viewing of Dumbledore’s Pensieve, Yates delivers a truly poignant and deeply heartfelt revelation of Snape’s true colours, and it is a farewell that even those who have read the book and can expect what is to come will be overwhelmed by its sheer emotional muscle. While Part II was always meant to be an action-packed spectacle, it is to Yates’ credit that there is still as much heart as before in the storytelling.

Though brief, this revelation also works brilliantly as a catalyst that propels Harry to come to terms with the sacrifice he has to make. This has something to do with the reason why Harry could see into Voldemort’s mind, and Harry’s realization of this leads up perfectly to the ultimate duel between him and Voldemort, one that is fierce, ferocious and- thanks to Yates’ imagination- more exhilarating than reading it off the page. Yes, the thrilling rush puts you on the edge of your seat, and more than ever, you worry about the fates of not just Harry, Ron and Hermoine, but also the rest of the wizarding world for whom this is a life-changing moment.

Indeed, we know it is no more than fiction, but faithful followers of the books and movies will tell you that this is also the pinnacle of a cultural touchstone- and as the posters have so rightly trotted out ‘it all ends here’. The outcome of that battle shouldn’t be a secret by now, and when the ‘happily-ever-after’ coda in Rowling’s book set 19 years later is also faithfully adapted here, you can’t quite help but be moved by how it so properly gives the series closure, coming full circle back to when Harry, Ron and Hermoine were no more than kids making the first of many train journeys at King’s Cross Station and Platform 9¾.

They are of course no longer kids here- Daniel Radcliffe, Rupert Grint and Emma Watson now young adults who have through the film series grown up right under our eyes. While Part I had greater emphasis on Ron and Hermoine, the focus here is squarely on Harry and Radcliffe truly shines in this instalment as his character steps forward to meet what was his destiny from day one. Radcliffe’s usual understated performance works superbly to his advantage here, allowing his audience to appreciate the enormities of the challenge before Harry- and it is an especially poignant sight when he takes in the destruction and the despair of Hogwarts and his friends held siege by Voldemort.

That we can be so fully immersed in Harry’s world is testament to the craft of each and every one of the technical team. Production designer Stuart Craig does a masterful job portraying the devastation around Hogwarts, complimented nicely by Eduardo Serra’s beautiful cinematography and Mark Day’s skilful editing. Alexandre Desplat’s evocative score, which combines his own elegiac work with both the John Williams theme as well as Nicholas Hooper’s mournful composition for the sixth movie, works magic with the visuals.

And most deserving of credit is none other than director Yates himself, who has matured movie after movie to deliver a crowning achievement for the series. This is as yet the most cohesive ‘Harry Potter’ movie yet- well-paced and confidently directed throughout- and perhaps the easiest to follow even for neophytes to the franchise (if there are still any out there who are curious to see this movie). As the producer right from the first movie, David Heyman deserves special mention for the consistency in quality that each of the films has exhibited through Chris Columbus, Alfonso Cuaron, Mike Newell and finally Yates.

Pardon us if we have also taken this opportunity to extol the merits of the ‘Harry Potter’ franchise- it’s really hard not to considering how this is the last time we will see the Potter-world in its current incarnation. It is this to which the movie is a farewell to, and it is as beautiful a farewell as it can be, packed with visual spectacle on a scale never before seen in any of the other films and fused with the same powerful emotion as Part I and the Yates films before. All good- even great- things have to come to an end, so there is really no better way to bid adieu than with this grand and glorious final chapter.

(What a way to go out! A culmination of every emotion invested in the series from the very first film, this final chapter is an exhilarating action-packed spectacle that delivers a magnificent finish to the beloved fantasy franchise)

HARRY POTTER AND THE HALF-BLOOD PRINCE (2009)

HARRY POTTER AND THE ORDER OF THE PHOENIX (2007)

HARRY POTTER AND THE GOBLET OF FIRE (2005)
Back 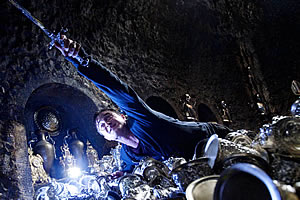 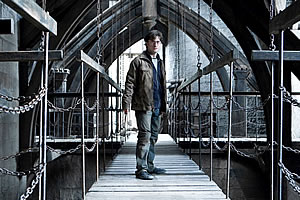 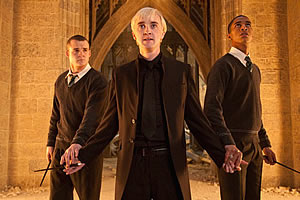 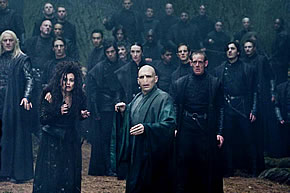