Synopsis: "The Hunger Games" chronicles a dystopic Capitol which requires its twelve subjugated districts to pay tribute in the form of a teenage boy and girl, forced to participate in the annual "Hunger Games," a fight-to-the-death live televised event. Katniss Everdeen's little sister is chosen in the lottery to participate and Katniss volunteers to take her place. Although persevering through hardship is commonplace for Katniss, she must start making choices that weigh survival against humanity and life against love in order to win the games and return home.
Movie Review:

Not since the Twilight franchise first hit the big screen in 2008 has there been so much fevered anticipation for a print-to-screen adaptation, but that should be expected for a book that spent 180 consecutive weeks on the New York Times bestseller list. Envisioning a post-apocalyptic North America named Panem comprised of a ruling Capitol and 12 enslaved districts, novelist Suzanne Collins’ ‘The Hunger Games’ was a smart dystopian sci-fi thriller which also served as darkly satiric commentary on a world gone mad on spectacle.

The premise of the titular Games is intriguing- as penance for their rebellion against Capitol rule 74 years ago, a boy and a girl from the ages of 12 to 18 are chosen by lottery from each district to fight to the death in a televised gladiator event. It’s the Capitol’s means of ensuring subjugation from the districts- ‘we own your lives’ is the message the sinister President Snow (Donald Sutherland) wants the Games to convey alongside a glimmer of hope by allowing that one triumphant individual to return home victorious.

That winner for the 74th Hunger Games is 16-year-old Katniss Everdeen (Jennifer Lawrence) from the coal-mining District 12, a strong-willed independent girl who has been providing for her grief-stricken mother (Paula Malcomson) and her younger sister Prim (Willow Shields) ever since their father died in an accident. Ever the protector, Katniss volunteers to take Prim’s place when her name is called during the Reaping and- together with fellow tribute Peeta (Josh Hutcherson)- is abruptly whisked off into a surreal world of pomp and pomposity very unlike their home.

It’s only a temporary reprieve before the survivalist Games, just enough time for Katniss to pick up some useful tips from her drunken mentor Haymitch (Woody Harrelson) and make an impression to both the Games keeper Seneca (Wes Bentley) and the sponsors whose contributions may mean the difference between life and death. All too soon, Katniss finds herself released into a densely forested arena- that is really a tightly controlled space rigged all around with cameras- and made to fight for her life alongside Peeta and 22 other Tributes while the citizens of Panem and the districts watch riveted.

While the concept plays like an amalgam of ‘The Truman Show’ and ‘Battle Royale’, director and co-adapter Gary Ross has chosen a Bourne-like style with handheld camerawork and quick cutting to inject urgency to the proceedings. Like Bourne too, our heroine is a master of her environment, making keen use of her terrain and the resources it offers to stay alive- even as the movie plays up the fact that the confrontations between her and her potential opponents are ultimately rigged by Seneca and his team for maximum viewing excitement.

Fans of the book will no doubt be making mental comparisons with key plot points in Katniss’ harrowing struggle- desperately hunting for water at the start; confronting an uneasy alliance of well-trained Tributes from wealthier districts; outsmarting them by unleashing mutated wasps known as Tracker Jackers on them; infuriating them by destroying their food supply; and of course allying with Peeta when the rules change to allow both a chance at survival. Ross, who co-wrote the screenplay with Collins and Billy Ray (of ‘Shattered Glass’), ensures that none of these crucial elements are lost, even as the order in which they occur get shuffled around.

At the fore of both the movie as well as the book- and played with remarkable clarity by Jennifer Lawrence in a performance of genuine grit and emotion- is Katniss’ winning combination of intelligence and humanity, despite the dehumanising state of affairs she has been thrust into. Just as adeptly as its source, Ross conveys Katniss’ ingenuity in the way she outwits her attackers as well as her indignation when an unlikely friend and ally, Rue (Amandla Stenberg), is abruptly killed. There is confidence, steeliness and vulnerability in Lawrence’s brilliant turn, just as- if not more- outstanding than her earlier Oscar-nominated performance in ‘Winter’s Bone’ where she also played a young teenager thrust into adult circumstances.

Not surprisingly, there are nuances that are evidently lost from the movie, some though more significant than others. Chief among them is the made-for-TV romance between Katniss and Peeta, key to understanding the climactic outcome at the end- whereas the first-person narration of the book allowed for a keen understanding of Katniss’ ambivalence, the movie’s portrayal opts for a much more straightforward portrayal that doesn’t do justice to Katniss’ complicated stirrings for Peeta vis-à-vis her hometown pseudo-boyfriend Gale (Liam Hemsworth in a small but crucial role when parts two and three roll by).

Ross also skims over the significant role Haymitch plays in their mutual survival (presumably to ensure tight narrative momentum), as well as the bloodshed of the actual Games (quite surely in order for the film to be able to play to a teenage audience). But in compensation, there is more emphasis on the behind-the-scenes manoeuvring by a quietly menacing President Snow- not simply setting the stage for later instalments, but also underlining the callousness of the Capitol administration in treating the lives of children as mere pawns in a psychological game of dominance and submission. Yes, if there is one aspect that comes off more strongly than the book, it is undoubtedly the allegory behind the dsytopic world of the Games.

Kudos then to Ross, who may have seemed an odd choice for the material given his past works ‘Pleasantville’ and ‘Seabiscuit, for boldly taking the creative liberties with the material while staying largely faithful and delivering a tense, thrilling, intelligent science-fiction thriller with sharp social critiques that will resonate with grown-ups. Indeed, don’t let the comparisons to Twilight mislead you for thinking that this is only for kids- thanks to a fearless performance by Lawrence, Katniss is a heroine that everyone of all ages can look up to.

(And the odds are indeed in this opening’s film’s favour- a tense, thrilling and smart science-fiction thriller with a brilliant lead performance by Jennifer Lawrence)

THE HUNGER GAMES: SONGS FROM DISTRICT 12 AND BEYOND - ORIGINAL MOTION PICTURE SOUNDTRACK (2012) 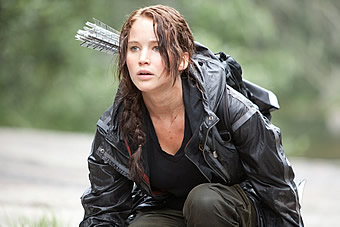 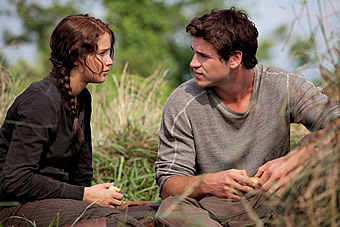 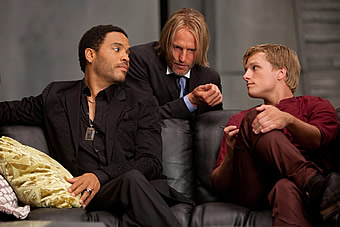 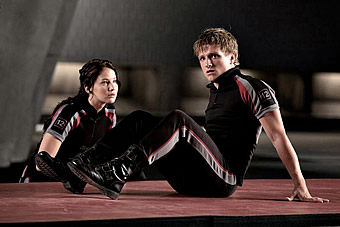