Synopsis:  Set in the South two years before the Civil War, DJANGO UNCHAINED stars Academy Award®-winner Jamie Foxx as Django, a slave whose brutal history with his former owners lands him face-to-face with German-born bounty hunter Dr. King Schultz (Academy Award®-winner Christoph Waltz). Schultz is on the trail of the murderous Brittle brothers, and only Django can lead him to his bounty. The unorthodox Schultz acquires Django with a promise to free him upon the capture of the Brittles – dead or alive. Success leads Schultz to free Django, though the two men choose not to go their separate ways. Instead, Schultz seeks out the South’s most wanted criminals with Django by his side. Honing vital hunting skills, Django remains focused on one goal: finding and rescuing Broomhilda (Kerry Washington), the wife he lost to the slave trade long ago. Django and Schultz’s search ultimately leads them to Calvin Candie (Academy Award®-nominee Leonardo DiCaprio), the proprietor of “Candyland,” an infamous plantation. Exploring the compound under false pretenses, Django and Schultz arouse the suspicion of Stephen (Academy Award®-nominee Samuel L. Jackson), Candie’s trusted house slave. Their moves are marked, and a treacherous organization closes in on them. If Django and Schultz are to escape with Broomhilda, they must choose between independence and solidarity, between sacrifice and survival…

So Quentin Tarantino’s latest work took home two Oscars at the recent Academy Awards. Austrian German actor Christoph Waltz received his second Best Supporting Actor accolade, and Tarantino was honoured with the Best Original Screenplay prize. Both works which earned the 66 year old Waltz his Oscars were directed by Tarantino, and we think he is deserving of them. Having watched all of Tarantino’s feature length movies, we were expecting a lot from this one, and while it isn’t a bad film per se, we feel that there could be a lot more to this action western drama film.

The film takes place in the antebellum era of the Deep South and Old West (trust Tarantino to explore this setting after tackling the bloody times in Nazi occupied France in 2009’s Inglourious Basterds), and the hero is a freed slave who journeys across the United States with a German bounty hunter to rescue his wife from a sadistic plantation owner in Mississippi.

Sounds like a simple and straightforward enough plot? Trust the American filmmaker (Kill Bill, Pulp Fiction) to churn out a somewhat lengthy 165 minute film, with an abundance of self indulgent sequences which can, well, be easily edited for brevity. Good thing then, that Tarantino knows how to stylise his production and keep viewers engaged with some very bloody fun throughout the film’s two hour and forty five minute runtime.

Fans who are familiar with Tarantino’s style will be pleased to know that it is still present here, despite us having doubts about how it will fit into the Western genre. With Robert Richardson’s  (Hugo, The Aviator) cinematography, and a kick ass soundtrack, viewers are taken on another visual and audio treat, where flashily appealing camerawork complements the madcap music chosen by Tarantino himself.

This is Tarantino’s second Best Original Screenplay prize after 1994’s Pulp Fiction, but we cannot but help think that it is the Academy’s way of recognising the director’s efforts, especially when we think he has produced more interesting and innovative screenplays before this. The tale of vengeance is well told here, but it somewhat lacks a punch which we were hoping to see.

Luckily then for the filmmaker, the three leads gave uniformly wonderful performances. Jaime Foxx (Dreamgirls, Ray) plays the titular Django, and besides being wowed by his toned physique, you’d empathise with the anger he is experiencing as a black slave. Waltz is nothing short of scene stealing in his role of the smart and fast talking bounty hunter, while Leonardo DiCaprio delivers another career defining performance as the villain of the show. It is really quite a pity the guy (who has come a long way since Titanic) hasn’t been recognised at any major awards. Samuel L Jackson shows up in an almost unrecognisable role, and without giving away too much, his character will have your eyes glued to the screen for the last half every time he appears.

Besides the bloodily fun finale (yes, it involves a shootout, lots of deaths and lots of blood), watch out for the powerhouse acting from the leads in a scene at a dinner table, where they play their wits against each other just by chatting. It is scenes like that which make us keep our faith in cinema.

THE ASSASSINATION OF JESSE JAMES BY THE COWARD ROBERT FORD (2007) 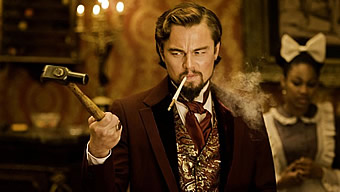 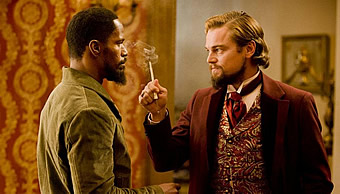 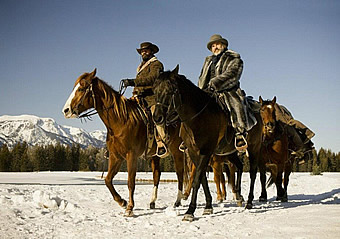