Synopsis: Set in the rugged and mysterious Highlands of Scotland, Disney•Pixar's “Brave” follows the heroic journey of Merida (voice of Kelly Macdonald), a skilled archer and headstrong daughter of King Fergus (voice of Billy Connolly) and Queen Elinor (voice of Emma Thompson). Determined to change her fate, Merida defies an age-old custom sacred to the unruly and uproarious lords of the land: massive Lord MacGuffin (voice of Kevin McKidd), surly Lord Macintosh (voice of Craig Ferguson) and cantankerous Lord Dingwall (voice of Robbie Coltrane), unleashing chaos in the kingdom. When she turns to an eccentric Witch (voice of Julie Walters), she is granted an ill-fated wish and the ensuing peril forces Merida to harness all of her resources including her mischievous triplet brothers—to undo a beastly curse and discover the meaning of true bravery.

First, the bad news: We aren’t adoring Pixar’s 13th film as much as we would have wanted to. The award winning animation studio has a lot to live up to, especially after heartbreakingly perfect works like the Toy Story trilogy (1995 – 2010), Wall.E (2008) and Up (2009). Sure, last year’s offering Cars 2 (2011) did not win too many critics’ hearts, but there was a fun element to the movie that we thought was a guilty pleasure. Here, we have a princess who is determined to make her own path in life, going all out to defy a custom that may bring chaos to her entire kingdom. Sounds vaguely familiar to the many other Disney heroines you’ve seen before?

The protagonist of this 100 minute film is Merida, a red haired princess who is also a skilled archer. Set in the highlands of the 10thcentury Scotland, she consults a witch for help after being set up for marriage by her mother. Before she knows it, her family becomes cursed and she has to undo the spell before it is too late.

The thing about Pixar productions is how they always manage to bring a touch of humanism, a life lesson which hits you during the end credits. With this latest computer animated fantasy adventure film, it seems like the Californiabased studio is relying on a been there done that formula which lacks that extra oomph. There is no doubt the technology used in the making of this film is astounding – just look at Merida’s red strands of hair, and the breathtaking landscape shots. This is a result of the wizards Pixar who completely rewrote their animation system for the first time in 25 years. The complex visuals are a treat to the eyes. Unfortunately, there is no groundbreaking stuff here when it comes to the plot.

The calculated pacing of the Walt Disney Pictures distributed movie is, perhaps, the most disappointing aspect of this otherwise recommended family movie. You know how the story will develop, you know how Merida’s defiance will eventually become bravery, and you know how you can expect a safe and happy ending. Although this isn’t a bad thing in this time of chaos and unrest, there is a part of you that wishes for something more.

The voice cast includes Scottish actress Kelly Macdonald (Trainspotting, TV’s Boardwalk Empire) as the big hearted Merida, British actress Emma Thompson (Last Chance Harvey, An Education) as the stubborn queen mother and Scottish comedian Billy Connolly (Garfield: A Tale of Two Kitties, Gulliver’s Travels) as the brutish king father. This talented cast brings an extra edge to the characters’ personalities, and aided by an aptly folksy score by Patrick Doyle (Harry Potter and the Goblet of Fire, Thor) featuring native instruments like bagpipes, fiddles and harps, this tale of bravery is an easy one to sit through.

Stealing the show are Merida’s triplet brothers Harris, Hubert and Hamish, three non speaking characters who provide countless chuckle worthy moments. Also worth mentioning is English actress Julie Walters’ (Molly Weasley in the Harry Potter movies) performance as The Witch. Despite having limited screen time, the hilarious character (which reminds us of Hayao Miyazaki’s creations) is one you won’t forget for some time.

All hope is not lost though – preceding the feature is La Luna, a seven minute short film directed by Enrico Casarosa which displays Pixar’s much loved story telling skills.

(This tale of bravery may not be groundbreaking, but is still enough to warrant an enjoyable visual treat) 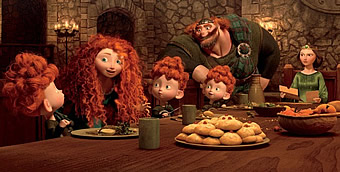 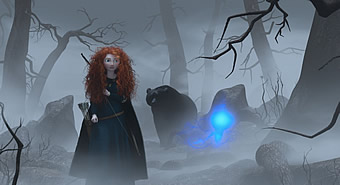