Synopsis: A fictional film set in the alluring world of one of the most stunning scandals to rock our nation, "American Hustle" tells the story of brilliant con man Irving Rosenfeld (Christian Bale), who along with his equally cunning and seductive British partner Sydney Prosser (Amy Adams) is forced to work for a wild FBI agent Richie DiMaso (Bradley Cooper). DiMaso pushes them into a world of Jersey powerbrokers and mafia that's as dangerous as it is enchanting. Jeremy Renner is Carmine Polito, the passionate, volatile, New Jersey political operator caught between the con-artists and Feds. Irving's unpredictable wife Rosalyn (Jennifer Lawrence) could be the one to pull the thread that brings the entire world crashing down. Like David O. Russell's previous films, "American Hustle" defies genre, hinging on raw emotion, and life and death stakes.

If there was yet any doubt in your mind from his previous two films ‘The Fighter’ and ‘Silver Linings Playbook’ that director David O’ Russell is on a creative streak, then his latest ‘American Hustle’ should convince you unequivocally to put these qualms to rest. Taking an unconventional approach to the loose retelling of the Abscam scandal, a late 1970s FBI sting operation that led to bribery convictions for a U.S. senator and several members of the House, it sees Russell at his most invigorated yet, a wild and woolly ride through the dark and dizzy heart of American ambition brimming with so much unbridled verve that it is quite impossible not to get caught up in its rapture.

Co-written by Russell and Eric Warren Singer, it begins on a definitively offbeat note with a paunchy Christian Bale painstakingly putting together his hair with some glue, a forlorn toupee and a comb-over. Bale’s transformation into the balding and bloated con man Irving Rosenfeld is a revelation in itself, one of his character reinventions that demonstrate his commitment as an actor and his astonishing ability to disappear into just about any role that he takes on. But more about Bale and the rest of the ensemble later on – what is apparent from this very opening scene is Russell’s screwball exuberance to the material, which recalls both stylistically and spiritually the spirit of vintage Scorcese.

That sequence thrusts its viewer into the same frame with the rest of the key actors - Sydney Prosser (Amy Adams), Richie DiMaso (Bradley Cooper) and Carmine Polito (Jeremy Renner) - whose roles in relation to Irving become clearer after Russell rewinds to recount the events leading up to that terse and tense exchange.  Allowing his characters their own voices, Russell lets Irving and Sydney narrate their own individual livelihoods - the former as a con artist with a dry cleaning business on the side and the latter as a knockout stripper from New Mexico - before the pair bond at a Long Island pool party over a shared passion for Duke Ellington's “Jeep's Blues” as well as a mutual belief in reinventing their respective lives.

Making use of an alternate identity as Lady Edith Greenleigh, Sydney builds a fake loan scheme with Irving using the company guise of London Associates. Their grifting enterprise becomes so successful that they attract the attention of Richie, an ambitious FBI agent whose latest target is white collar criminals and whom arm-twists the pair into setting up a scam involving a fake sheikh (Michael Pena) to reel in some bigger fish. What follows is an increasingly elaborate - and dangerous - sting operation that calls into question their shifting personas and motivations, especially as the all-too eager Ritchie works his way up the food chain with New Jersey mayor Carmine as his prime focus and eventually unwitting pawn.

While the title ostensibly refers to Irving and Sydney’s business, the brilliantly written script slowly peels back the layers of each and every one of its characters to reveal each as a ‘hustler’. For Ritchie, that means refusing to see through the delusions of his FBI glory to recognise the good intentions of Carmine and the rest of his targets.  It also is refusing to accept his hen-pecked life in a working-class home with a mother and fiancé, and finding distraction instead in his growing attraction for Sydney. And for Irving and Sydney, their hustle lies not only in their schemes but also in their personal lives, what with Irving being married to a much younger but also much more unhinged wife Rosalyn (Jennifer Lawrence) whose young son is the apple of his eye. There are no perfect characters here, no saints or heroes or role models to look up to; rather, each in his or her own way inevitably resorts to some form of hustling in order to survive.

It is evident from how richly Russell sketches these characters that he loves each and every one of them, and his passion for the material is matched by the enthusiasm and creative energy that each one of his actors brings. Reflecting that perfect synergy between actor and director, Russell and his ace cast share a trust and confidence in each other that is demonstrated in the boldness with which they take to their roles. Not one of these actors is a stranger to Russell - Bale and Adams from ‘The Fighter’ and Cooper and Lawrence from ‘Silver Linings Playbook’ - and their combination sets off an explosive chemistry that counts as acting fireworks. Throw in a terrific Renner, comedian Louis C.K. in a deadpan performance playing Ritchie’s beleaguered superior and De Niro in a brief but impossible to miss turn as a mafia chief, and you have just about one of the finest ensemble outings in a very long while.

Russell’s love for these idiosyncratic characters extends also to the era in which they belong, and he portrays with a giddy headiness the excesses and extravagances of the 1970s. With cinematographer Linus Sandgren, production designer Judy Becker and costume designer Michael Wilkinson, Russell recreates in elaborate detail the glamour of the decade - and from Carmine’s pompadour to the Halston dresses of the women to the disco scene straight out of ‘Saturday Night Fever’, there is an infectious brio coupled with Danny Elfman’s evocative score and some choice tunes from Chicago, Jeff Lynne, Steely Dan, Donna Summer, Elton John and David Bowie that you’ll be completely swept up in. That gaudy sheen also reinforces the movie’s central message - that in a time when appearances and poise mattered so much, it is inevitable that hustling became a necessary trait to survival.

Indeed, ‘American Hustle’ might very well be Russell’s best film that boasts a perfect balance of the director’s spontaneity and control. He gives his gallery of strays, cheaters and deceivers plenty of room to roam far and wide, and yet nothing feels superfluous at any point. And in that corral, we see Bale’s magnificently understated performance, one that grows in pathos and dignity as he is called upon to be the film’s moral centre; we also see Adams’ most versatile act yet, showing a depth in a darker and more dangerous role than she has ever played; we are also treated to Cooper at his funniest and liveliest, digging deep to unearth a maniacal side yet unseen; last but not least, a simply magnetic Lawrence who is mesmerising as “the Picasso of passive-aggressive karate”.  Exceptional performances from some of the finest actors of our generation, a director at the top of his game, and an intriguing subject that finds its relevance even today, this is one movie that belongs on your must-see list and every critic’s best-of list of the year.

(Hands down one of the best films of the year, this fictionalised account of the Abscam scandal is riotously entertaining and ceaselessly captivating thanks to an A-list cast at their best and a director at the very top of his game) 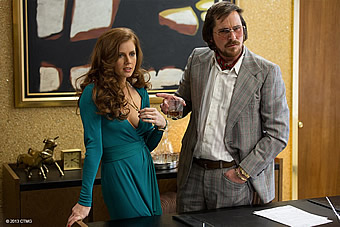