Synopsis:  After leaving their company Christmas Party together, David Hargrove and Emily Brandt's impromptu first date takes an unexpected turn when their co-worker, Corey, asks them to make a late-night stop at an ATM. What should be a routine transaction turns into a desperate struggle for survival when an unknown man appears outside the vestibule. With the wintry temperatures dipping below freezing, and the morning sunrise still hours away, they have no choice but to play the man's deadly game of cat-and-mouse..

An all-too obvious attempt at replicating the unexpected success he enjoyed with Ryan Reynolds’ ‘Buried’, ‘ATM’ sees writer Chris Sparling returning to a claustrophobic conceit, pitting three individuals trapped within the confines of an isolated ATM against a hooded parka-wearing figure standing outside. The premise is gimmicky no doubt, but Sparling had managed to turn a similar high-concept into a surprisingly tense and thrilling experience the last time round, so it isn’t unreasonable to think that he could do the same with this movie.

Alas, ‘ATM’ is not even half as smart as his previous ‘Buried’, with its three characters behaving so ridiculously that you end up rooting for their demise instead. Indeed, there are so many moments where you’re bound to go ‘now why did they do that’ or ‘now why didn’t they just do that’, which of course does little to convince of the plausibility of the entire setup. And if it proves to be entertaining, it only manages to be so for all the wrong reasons.

Unlike ‘Buried’ where we are thrust from the very first shot into the tight space, director David Brooks takes about twenty minutes to get to that point- although this extended prologue does little in garnering any empathy for any one of the characters. All three- David (Brian Geraghty), Emily (Alice Eve) and Corey (Josh Peck)- happen to be colleagues at the same investment bank on their way home from their company’s annual Christmas party. And oh, if it makes any difference, this is also the first time David has plucked up his courage to talk to Emily the intern whom he has a hopeless crush on.

Upon request by the tactless and thoughless Corey, David makes a slight detour so Corey can take some money out from an ATM in the middle of a desolate parking lot to get supper. Following some narrative contrivance involving David’s faulty card, all three co-workers end up in the ATM booth- trapped inside by said masked figure whom they watch stabbing a passerby to prove to them as well as the audience that he is no Santa Claus. It doesn’t occur to them that there’s three of them and one of him, neither does it dawn on them earlier on to trigger some sort of alarm (which David eventually does) to alert the authorities.

On the contrary, they wait like sitting ducks while their terroriser figures out some way to flush them out- which again he only does, and we mean ‘flush’ literally, towards the end as dawn approaches. Not only do the trio come across as unresourceful, there is little that the script nor Brooks does to get you to root for them- least of all Corey, who is cast as selfish and callous. From one dumb missed opportunity for them to escape to another, the movie wears its audience’s patience thin waiting for the dim-witted affair to be over.

Worse still, for those willing to give it the benefit of the doubt and wait for some smart twist at the end, Sparling squanders that opportunity for redemption with an opaque explanation that offers little of the villain’s motivation. What is the point of watching David, Corey and Emily squirm in that ATM booth? Sparling offers no clue, choosing instead to divulge a little more of his villain’s methodical planning for a next ATM, hinting at the dreaded possibility of a sequel.

To his credit, Brooks tries his best to maintain a tense atmosphere throughout, and there are a few effective thrilling moments in the film. Ditto for the cast, especially an understated Geraghty, who seem genuinely invested in their characters’ circumstances. Nonetheless, both Brooks and the cast are let down by the loophole-ridden script that demands its audience throw all semblance of logic out the window.

Like its confined setting, such a premise requires tight plotting- and given that Sparling knew as much in ‘Buried’, the flaws in ‘ATM’ could only be due to sloppiness. How else would you explain why none of his characters thought to park their car right outside the ATM, instead of 100m away in the freezing cold weather?

(Illogically frustrating, this poor attempt at replicating the claustrophobic setting of ‘Buried’ within the confines of an ATM is a thriller with minimal payoff) 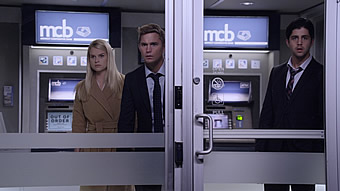 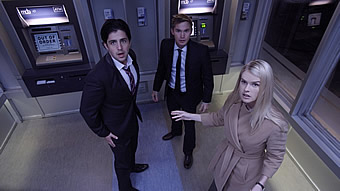 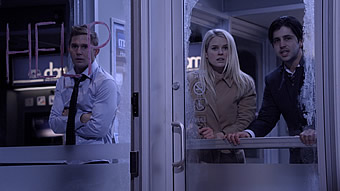