Synopsis: Based on real people and events, this is a story about a domestic helper, Sister Tao (DEANIE IP) who served the Leung's family since she was 13. 60 years went by, the family is left with the only successor of the family, Roger (ANDY LAU) and herself. The master-servant relationship between the two is well and supportive through mutual understanding by lack of proper communication. One day, Sister Tao is found to suffer from apoplexy. In order not to burden Roger, Sister Tao requests to stay in an elderly home. At the elderly home, Sister Tao experiences a shrunken world that is neglected and marginalized by other sectors of society and also meets several characters. Though feeling down, Sister Tao's biggest hope is that Roger will never fail to turn up to visit her. Roger visits her on a frequent basis and claims to be Sister Tao's godson. Once Roger was receiving care from Sister Tao and now the role is reversed. Through the days, Roger has come to realize that Sister Tao holds a far more important position in his life than he had thought. Embraced by the love and care from Roger, Sister Tao is able to enjoy life after her retirement.

One of my fondest memories of Hong Kong movies was The Unwritten Law, where Andy Lau played a hotshot lawyer whose client was a middle aged prostitute accused of murdering a client. That film was back in 1985, which spawned quasi-follow up films with The Truth (1988) and The Truth: Final Episode (1989), where they made waves for the powerful courtroom drama, as well as having its fair share of tear-inducing, emotional scenes especially since the characters continue to be kept in the dark about their true relationships. Who would have thought that after so many years both actors in their latest pairing would have made waves around the world, winning accolades and awards for their performance together once again.

Credit of course goes to director Ann Hui, herself a maestro in making down to earth dramas that isn't flashy or flamboyant, yet packs in plenty of gravitas in her handling of scenes and characters, making it all vividly real, believable and identifiable. Here in The Simple Life, she tackles the issue of ageing head on in a cosmopolitan, fast paced society, where it seems that for those with limited resources, there aren't plenty of options made available, unless one has someone filial enough to see through one's twilight years. With Singapore heading toward an ageing population ourselves, the subtle messages in this heartfelt film, cannot be something more than apt when you put yourself in shoes worn by the characters.

Deannie Yip plays a ma-jie (servant) called Tao Jie, whose life is spent in servitude toward the Cheung family through four generations, the latest being Andy Lau's Roger, a producer whose time is straddled between Hong Kong and China. She takes care of the last member of the family still based in Hong Kong while the rest have emigrated to the USA, and life is fairly routine with her caring for her not-so-young master, cooking, washing and cleaning, until a stroke strikes. With whatever resources available and being really pragmatic, Roger arranges Tao Jie to rehabilitate in a nursing home for the aged, and with his constant visits, form the narrative and emotional crux of the film.

The film's narrative moves like Life, in episodic form with memorable incidents rather than being one large soap opera, with time shifts between scenes that could be as slow as days, or skipping along as fast as months, sometimes marking certain unfortunate milestones with injury or death as experienced by the patients and residents of a home. There are colourful characters to keep things lively, but you can sense that feeling of being cast away, with Tao Jie being one of the lucky few who has constant visits by Roger, introduced as her god-son to save her the blushes that in this modern day and age, that she is still subservient to someone not of her own. The story has plenty of subtle, and none-too-subtle snapshots on the lives of the aged, and also made some keen observations on how hypocritical things can get especially when tasked to care for someone elderly, regardless of blood relations.

Deannie Yip really put in a performance of a lifetime, masterful in her endearing portrayal of an elderly woman who dotes on her master, and being a great cook, is extremely discerning with food. It's not always doom and gloom in her twilight years which A Simple Life focuses on, but rather her more sprightly, memorable episodes spent with her favourite man she helped to raise, still having her looking out for the him rather than being unilaterally one sided only. She truly deserved her Volpi Cup from the Venice Film Festival and Golden Horse award, and it's difficult not to tear up especially when Tao Jie inevitably deteriorates with the passage of time. With the help of makeup, Deannie Yip looks like, and delivers a performance worthy of a million dollars.

Andy Lau's character too played up the challenges of the younger generation who has to strike a balance between career and looking after an elderly loved one, where one cannot normally spend as much time as one would like to, so the compromise here is to ensure quality of life. Having to look after the aged myself, this is something instantly that can be related to. What I particularly liked is how sometimes with the best of intentions and will to juggle two different priorities, things don't really turn out as planned, as seen from Roger's movie premiere, which in Tao Jie's eyes, Roger could do no wrong and his latest film was a masterpiece, despite the opinions of others.

The film also contains many light, comedic moments, sometimes when you least expect, but never trying too hard to elicit a laughter. It's all done very naturally, and a pity that this wasn't screened in Cantonese as I'm pretty sure there were a number of lost in translation moments. Celebrities also flocked to the film to lend a hand in whatever way possible, though in this case probably to boost the film's appeal factor with many familiar faces, from directors and producers playing themselves, and actors taking up cameo appearances.

Bring your elderly friends, relatives and family to the film, and you're assured of a meaningful and moving time when you will inevitably think about quality of life in twilight years, perhaps inspiring all to spend more time with one another, to lend support, and encouragement, as well as reflecting on issues on both sides of the equation, with the perspectives from both young and old, the caregiver and the ones needing care. Highly recommended! 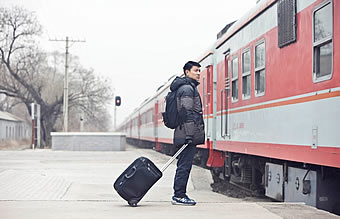 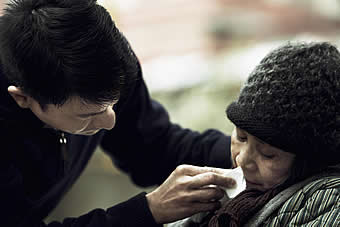 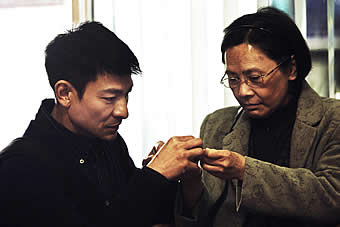