Synopsis: The Bank of Spain is like no other. An absolutely impenetrable bank. A bank that nobody could ever rob. With no blueprints, no data and no living person knows the monumental engineering work used to build the safe more than a hundred years ago. An absolute mystery. This thrilling challenge ignites the curiosity of Thom (Freddie Highmore), a genius determined to discover the vault’s secrets and make it into the depths of the bank. The target is a long-lost treasure that will be held inside the bank for only ten days. Led by charismatic art expert Walter (Liam Cunningham), Thom and his team have just ten days to prepare the heist and pull off a once-in-a-lifetime escape plan. Ten days to plan, but only 105 minutes to carry out that plan: the 105 minutes of the Soccer World Cup final that will draw hundreds of thousands of fans to the door of the Bank of Spain. The countdown begins.

Except being mostly funded by Spain and shot in Spain, Way Down or otherwise known as The Vault in the States is a generic well-acted heist flick no different from any other big Hollywood titles.

Shady deep sea salvager Walter (Liam Cunningham) and his partner in crime, former British operative James (Sam Riley) has just recovered some 1600’s sunken treasure from below the sea. But before they can cash in the cheque, the loot is seized by the Spanish authorities and later on declared them to be theirs since they are found in Spanish waters. So Walter decides to pull off a “Danny Ocean” and assembled a motely crew to penetrate the most secure bank in the world, The Bank of Spain hoping to retrieve his treasure.

Walter’s crew or bank robbers in this case includes handyman Simon (Luis Tosar), computer hacker Klaus (Axel Stein) and the only rose among the toxic white males is master of disguise Lorraine (Astrid Berges-Frisbey). But Walter lacks a genius engineering expert and for some reason manages to recruit brilliant Oxford graduate Thom (Freddie Highmore) who decides to be a thief instead of putting his brains into better causes. Passion as what Walter and Thom calls it.

Unfortunately, Way Down is never as thrilling as it should be. Never as witty or funny as the Ocean series or The Italian Job original and remake. The plot devotes a decent amount of time in the prologue introducing Thom, a young man who supposedly helms from a reputable family and turning down job offers from the world’s biggest oil companies. Within minutes we know he is the smartest guy in the room yet we never really know what’s up with main guy Walter or his associate, James. Even Jean Gray aka Famke Janssen appears in a small role as a dodgy MI6 agent who seems to know or worked with Walter before.

The plotting however does a good job explaining the heist which in short, needs to get into the vault to retrieve Walter’s coins without activating the mechanism that will filled up the vault with water and drowning them. The solution on how to resolve this lies in the hands of Thom. But before that, there is a prolonged sequence where we see Thom, Simon and Lorraine trying to steal some keys from the bank with Walter, James and Klaus panicking and glue to the screens watching them in action. Obviously this is carried out both to compensate for the thin plot and generate some excitement and perils. Somehow it just feels rather stale and lifeless overall. There’s really no real tension to speak of despite director Jaume Balaguero’s best attempt to serve up a huge commotion.

Soderbergh's movies know how to mix fun with tension. The camaraderie among the crew are insane. There’s an explosive expert, conman, pickpocket and acrobat. Each bringing their own set of skills to the heist. Way Down on the hand relies mainly on one person – Thom. Walter despite being the leader has no real leadership skills or knowledge except his precious treasure. James seems jealous of Thom’s capability, casting doubts on his newly-found life as a criminal. There’s more to James but we don’t really see it for most of the runtime. Predictably, Lorraine serves sort of as a love interest for Thom while Simon and Klaus are not even consider as comedic sidekicks.

As a so-called distraction, the heist which is set during the 2010 World Cup final adds nothing to the material. Same goes to huff-and-puff Gustavo (Jose Coronado), the bank’s head of security and his group of heavily armed guards. The actors tried their best to liven up the sparse script but there’s only so much actors can do. Though Way Down fails to be a sharp fun crime caper, there’s no denying that the movie is well-shot and slick in general. This is definitely not an ensemble piece, Freddie Highmore gets to have all the fun. He is the leading man who gets to play smart and he speaks Spanish. Oh, did we forgot to mention he is also one of the producers.

(Way Down fails to manifest into something extraordinary) 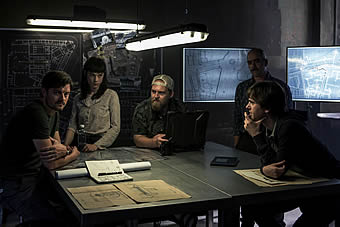 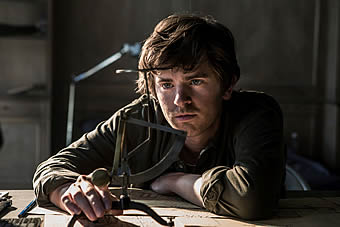 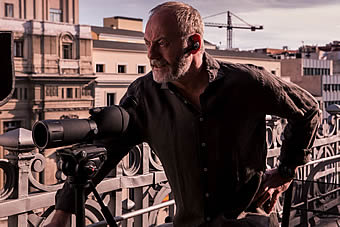 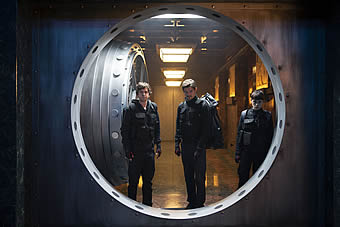 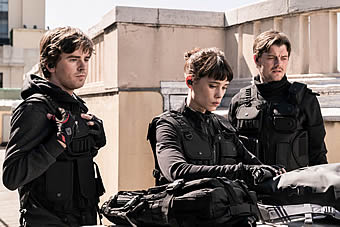