Synopsis: In Disney’s “Maleficent: Mistress of Evil,” a sequel to the 2014 global box office hit, Maleficent and her goddaughter Aurora begin to question the complex family ties that bind them as they are pulled in different directions by impending nuptials, unexpected allies and dark new forces at play. The years have been kind to Maleficent and Aurora. Their relationship, born of heartbreak, revenge and ultimately love, has flourished. Yet the hatred between man and the fairies still exists. Aurora’s impending marriage to Prince Phillip is cause for celebration in the kingdom of Ulstead and the neighboring Moors, as the wedding serves to unite the two worlds. When an unexpected encounter introduces a powerful new alliance, Maleficent and Aurora are pulled apart to opposing sides in a Great War, testing their loyalties and causing them to question whether they can truly be family.

Ever heard stories about bringing parents to meet your future in laws for dinner? This Disney movie gives you another reason why you shouldn’t do so.

A few years have passed since Maleficent wreaked havoc (but for a good reason). Aurora is now Queen of the Moors, where fairies and mythical creatures roam happily throughout the land. Prince Phillip proposes to the beautiful Aurora, and a dinner party follows. Aurora brings her scary godmother to dinner with Prince Phillip’s parents King John and Queen Ingrith. Someone pisses Maleficent off, and all hell breaks loose.

Expectedly, the best scenes of this Disney sequel to the 2014 movie are those the titular character. We were first introduced to the supposed antagonist of the beloved fairytale adapted into a classic animated film by the House of Mouse in 1959. It was a fresh idea to see the turn of events from the villain, and portraying the relationship with Aurora and her corrupted father. Angelina Jolie steals every scene she is in, the moment she stands on top of a cliff asking her pet raven not to ruin her morning.

Things get a lot more interesting when Maleficent prepares for the dinner party. She learns how to greet people without scaring them off, and we can’t think of any other actress who can embody Maleficent’s aura. Maybe it’s the dramatically sharp cheekbones, or the intimidating horns – there is something regally frightening when you see Maleficent as a live action character.

Then the dinner party happens – Jolie gets to pit off with Michelle Pfeiffer’s Queen Ingrith. It is pure joy to see the two actresses share the screen, engaging in a royal catfight. Sarcasm fills the air as the two women throw pointed one liners at each other. You know what they say about hell has no fury like a woman scorned.

We feel that we are talking too much about Maleficent and the great job done by Jolie when she becomes a b***h. It would have been nice if the filmmakers gave her more screen time to show off that side of hers, because the rest of the 118 minute movie does feel like a calculated Disney production. There are happy fairies flitting around the pastel coloured kingdom, there is true love between Aurora (Dakota Fanning trying her best to hold her ground) and Prince Phillip (Harris Dickinson, who has taken over Brenton Thwaites’ role, but is equally forgettable), and an overstretched final sequence where the two get married at a syrupy ceremony.

The supporting characters (especially the fairies played by Imelda Staunton, JunoTempleand Lesley Manville) don’t get to do much, and viewers are treated to one lovely computer generated sequence after another. There is also this side plot where Maleficent finds her own kind in a mysterious location which looks breathtaking. Like a true blue Disney movie, this one directed by Joachim Rønning mesmerises you with its top notch production values.

The most impressive segment of the film happens when Queen Ingrith wages a war with fairies. Maleficent swoops in to join the battle, and the spectacle of the sequence can only truly be experienced on a cinema screen. The two sides fight each other against Geoff Zanelli’s majestic soundtrack score, and although you know how things are going to end (it’s a Disney movie, remember?), you indulge yourself in the scene, fully knowing well that it could have been shortened for brevity.

(Majestically shot with impressive visuals, this movie could have done with more screen time for its titular character) 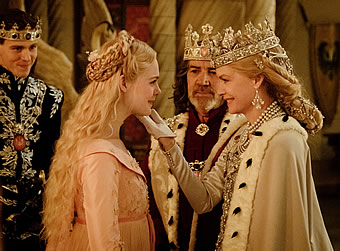