Synopsis: Starring Jackie Chan and Pierce Brosnan, action-drama movie THE FOREIGNER is based on a 1992 novel, The Chinaman. The British-Chinese co-production also stars Charlie Murphy, Orla Brady, Liu Tao and Katie Leung. The movie tells the story of Quan (Jackie Chan) a humble London business man, whose long-buried past erupts in a revenge-fueled vendetta when his teenage daughter dies in a senseless act of politically motivated terrorism. His relentless search to find the terrorists leads to a cat-and-mouse conflict with a British government official Hennessy (Pierce Brosnan), whose own past may hold the clues to the identities of the elusive killers.

Martin Campell (Goldeneye, Casino Royale) hasn’t made a feature length movie after his 2011’s critically panned and poorly received superhero movie, The Green Lantern. Maybe all this while, he is taking his time to look for a suitable script or maybe he is just looking for the right actor to make a comeback, one that can prove to his detractors he still has the spirit and might to make a compelling movie.

Since helming an immersive popular superhero property was a disaster for the veteran director, it’s best to return to some old school storytelling and mano-a-mano action. Campbell bounced back to the screen with this vengeance tale named The Foreigner which is based on a novel written by journalist turned writer Stephen Leather and adapted to a screenplay by David Marconi (Enemy of the State, Live Free or Die Hard).

Quan Ngoc Minh (Jackie Chan) is an ordinary, hardworking immigrant in his sixties who owns a Chinese restaurant in the heart of London. When his only surviving daughter (Katie Leung from the Harry Potter series in a 10 seconds appearance) is killed in a bomb blast, the devastated doting father is determined to hunt down the killers and that includes stalking the Irish Deputy Minister, Liam Hennessy (Pierce Brosnan) who has a chequered past with the terrorist cell for information.

If you could forgive the fact that the screenplay does little to diverge from the original material (which was first published during IRA’s heydays in the nineties) with the motives of the terrorists seem dated and irrelevant, the merciless bombing incidents seen in The Foreigner is actually an eerie replica of what’s happening in current day London. Perhaps it’s too sensitive a subject to touch on especially with the recent attacks or perhaps there are too many similar conspiracy theme movies out there that Campbell choses to focus on UK and Ireland’s troubled past instead.

Certainly, The Foreigner has no lack of underground politics, dubious government officials and countless layers of conspiracy theories - and you assume Campbell is going to walk in and deliver a no-brainer, revenge flick. For sure, die-hard moviegoers are going to compare this to Campbell’s 2010 thriller Edge Of Darkness which starred troubled star Mel Gibson on a trail of vengeance after his daughter is killed on his doorstep. Both movies had the leading actor looking for revenge after the loss of their daughters and both movies offer shady government operations etc. However, while the latter is massively talky and lacking of a good action set piece, The Foreigner compensates by having a rather captivating pacing and of course, actors (not just kung fu star mind you) Jackie Chan and Brosnan.

With intended aged makeup applied and elderly mannerism, Chan remarkably looks and nails the part of a grief-stricken man who has lost every of his lost ones over the years. Clearly, Quan is a role that is made for Chan. It’s a character that requires him to showcase his acting chops and also to fight in which he obviously delivers in a few key action scenes. We first see Quan in action in a small bed-and-breakfast, before he proceeds to take down several men in the forest later on. No doubt the action sequences are all too brief, nevertheless it’s brutal and swift, constantly putting viewers on the edge. Thanks to renowned stunt coordinator Greg Powell and JC stunt team, the action is apparently more grounded than Chan’s usual flashy moves since his character is military-trained in combat.

Pierce Brosnan on the other hand has it easy. His character gets to romance a younger woman (might not be a good thing as it turned out), he finally gets to speak in his native Irish accent and his frequent co-star onscreen is a handphone! Jokes aside, Brosnan gets to chew up the scenery as the ambiguous minister, a complex man who might or might not be linked to all the terrorist bombings in London. Even though this is touted as the first collaboration between Chan and Brosnan, the two legends have less than three scenes on the screen together which is pretty much a pity.

Despite a relatively familar storyline, The Foreigner is one hell of a ride courtesy of Campbell’s masterly hands at the helm and Brosnan’s engaging performance. As for our man Jackie, this ranks among the best of his serious roles after Shinjuku Incident and Crime Story. For younger fans who can’t get enough of Chan’s acting, you can check out his much earlier dramatic role in Heart of Dragon opposite Sammo Hung.

(Possibly the best Jackie Chan’s flick in a decade! Not forgetting the good efforts of Campbell and Brosnan) 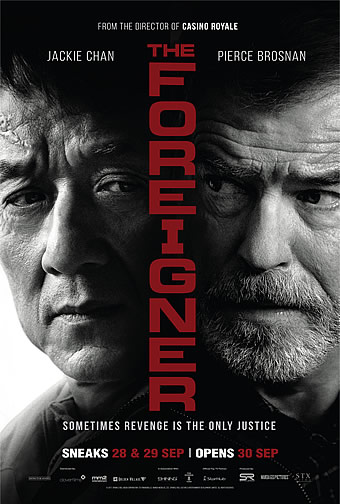