Synopsis: Tom Cruise stars in Oblivion, an original and groundbreaking cinematic event from the director of TRON: Legacy and the producer of Rise of the Planet of the Apes. On a spectacular future Earth that has evolved beyond recognition, one man’s confrontation with the past will lead him on a journey of redemption and discovery as he battles to save mankind. Jack Harper (Cruise) is one of the last few drone repairmen stationed on Earth. Part of a massive operation to extract vital resources after decades of war with a terrifying threat known as the Scavs, Jack’s mission is nearly complete. Living in and patrolling the breathtaking skies from thousands of feet above, his soaring existence is brought crashing down when he rescues a beautiful stranger from a downed spacecraft. Her arrival triggers a chain of events that forces him to question everything he knows and puts the fate of humanity in his hands.

So much for its ambition of being a ground-breaking science-fiction thriller – like the first of many twists that you will no doubt see coming, ‘Oblivion’ is a clone of other far superior genre classics, e.g. the little-seen but highly acclaimed ‘Moon’. Indeed, much excitement has been swirling around its plot details, fuelled no doubt by its long-gestating genesis – meant in the first instance as a film, developed as an unpublished graphic novel, and then reverting back to a motion picture after a heated auction and a changing of hands from Disney to Universal – but this passion project from ‘Tron: Legacy’ director Joseph Kosinski isn’t particularly smart or original to satisfy those heated expectations.

Narrated by Tom Cruise’s lead character, a Commander Jack Harper, the story is set sixty years later after a heated war between mankind and aliens has decimated much of the Earth as we know it. Its inhabitants evacuated to one of Saturn’s moons, Jack is apparently but one of the few remaining humans, a ‘Techie’ whose mission is to maintain the drones that are protecting the machines extracting the Earth’s remaining resources. Jack’s luckier though than most other equivalent sci-fi characters; he’s got a female companion Victoria (Andrea Riseborough), who is also his Comms officer maintaining contact with Mission Control – aka Sally (Melissa Leo) – and watching his back while he is out on his runs.

The opening prologue establishes not only the cataclysmic backdrop but also Jack’s inner state of mind, haunted by visions of a distant yet familiar past of him on a busy New York City street and on the viewing deck of the Empire State Building before the Earth’s devastation. Reality though is far more sombre, as Jack senses the imminence of some larger danger looming with a sudden spike in the number of crippled drones that have their nuclear fuel cells subsequently removed. That’s supposedly the nefarious work of what’s left of the warring alien race, referred to as the Scavengers, which prowl the wastelands to destroy any trace of human civilisation.

Anyone with a reasonable amount of doubt will certainly guess that there is more than meets the eye, but Jack only realises that when a rogue signal brings a space shuttle crashing onto the surface of the Earth. Not only does the craft called the Odyssey carry with it some human astronauts in deep sleep, one of them whom Jack risks his life to protect is the girl he glimpses in his dreams, a certain Julia Rusakova (Olga Kurylenko). Truth comes knocking when he escorts Julia to return to the crash site to retrieve the flight recorder but is instead captured by an insurgency led by the enigmatic Malcolm Beech (Morgan Freeman), who urges him to look beyond the obvious.

Fortunately for him – and perhaps less so for those of us hoping for some deeper revelation – Jack needn’t think too hard. No prizes for guessing what sort of resistance Malcolm and the rest of his guerrilla army are fighting, or who Julia was to Jack in his previous life, or even the very nature of Jack’s being; even though Kosinki and his writers – Karl Gajdusek and Michael Arndt – try their darnest to keep their cards close to their chest, the deck that they hold isn’t that surprising or outstanding after all. Peripheral details aside, this is essentially the story of one man who thinks he is fighting on the right side of justice, learns that the world that he used to know was a lie, and then decides to switch sides to fight for the resistance. Wait, wasn’t that basically the story of ‘The Matrix’ as well?

Once you accept that this isn’t going to be some masterpiece, you’ll come to better appreciate Kosinski’s treatment. Just as he amply demonstrated with his feature film debut, Kosinski’s strength lies in his ability to transport his audience into a richly imagined world full of stunning detail. There is something truly astounding and even humbling about the  post-apocalyptic landscapes against which the movie is based - from half-standing baseball stadiums to the ruins of the Empire State Building to the pockets of lush untouched greenery – that Kosinski uses in a particularly evocative manner, such that every frame is always visually and emotionally engrossing to suit the mood of the scene.

More significantly, Kosinski has greatly matured as a filmmaker since his first outing. No doubt assisted with a much stronger script than ‘Tron: Legacy', Kosinski displays a newfound dexterity in his storytelling, keeping a brisk and engaging pace throughout the movie through a good balance of larger action-packed sequences and quieter intimate moments. Noteworthy is the fact that of the former, there is an exhilarating high-speed chase over mountains, gorges and valleys that especially impresses; whilst of the latter, the mystery behind Jack’s identity is well-played for poignancy. At least we can reassure you that if you thought that ‘Tron: Legacy’ was more style than substance, there is a lot more substance here to match Kosinski’s distinctive visual style.

And then of course there is Hollywood’s leading man Tom Cruise, who plays a variant of his stoic loner-type characters not too different from his latest ‘Jack Reacher’ (the similarity in first name entirely a coincidence) or his earlier ‘The Last Samurai’. Cruise goes for a more subtle (i.e. less showy) performance this time round that fits in nicely with the restrained tone of the film. Although he gets to share more screen time with two beautiful ladies, Olga Kurylenko and Andrea Riseborough, it is his scenes with Morgan Freeman that possess the most zing  - pity then that there are too few of those in a film that uses Freeman in no more than an extended cameo.

Certainly, that doesn’t feel like the only missed opportunity in a movie whose hype threatens to be its Achilles’ heel. More derivative of other seminal sci-fi classics than you would expect it to, ‘Oblivion’ will disappoint those looking for a genre-defining masterpiece. Instead, what it boasts is a filmmaker well in tune with the sensibilities of the genre, who has taken some of its signature elements and recycled them into something intriguing yet ultimately familiar, and whose eye for detail and spectacle is rather amazing to say the least. It is visually stunning no doubt, and packed with enough intrigue and excitement to make for a captivating leap into a dystopic future. And for the more discerning, we'd leave you with the following poem from the ‘Lays of Ancient Rome’ which is quoted in the movie - after all, if it knows to quote 'Horatius', it probably does boast some level of elegance:

"To every man upon this earth
Death cometh soon or late.
And how can man die better
than facing fearful odds,
For the ashes of his fathers,
And the temples of his Gods.”

(Not a classic by any measure, this intriguing yet familiar thriller that boasts its director Joseph Kosinski’s eye for visual spectacle still packs suspense and excitement for a satisfying sci-fi outing) 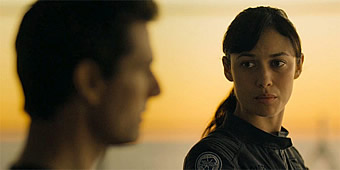 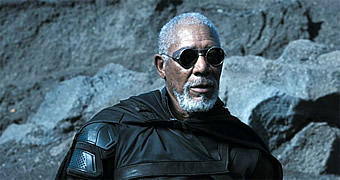 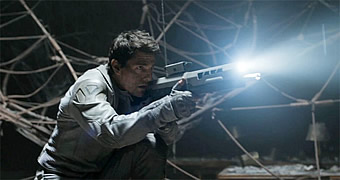 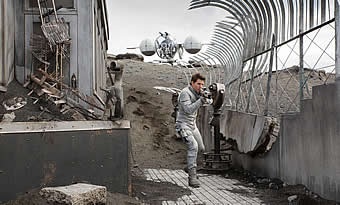 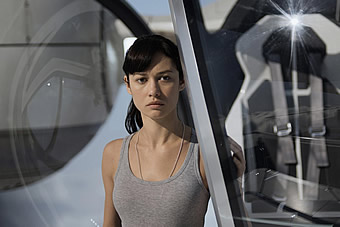