Synopsis: A sadistic mastermind unleashes a twisted form of justice in SPIRAL, the terrifying new chapter from the book of SAW. Working in the shadow of an esteemed police veteran (Samuel L. Jackson), brash Detective Ezekiel "Zeke" Banks (Chris Rock) and his rookie partner (Max Minghella) take charge of a grisly investigation into murders that are eerily reminiscent of the city's gruesome past. Unwittingly entrapped in a deepening mystery, Zeke finds himself at the center of the killer's morbid game.

The collection of Saw films has shuttled along its timeline, but one fact remains - Jigsaw, the vigilante serial killer, is well and truly at rest. So what would it possibly take for a new episode to arise? It seems, a chance meeting between franchise fan Chris Rock and Lionsgate vice chairman, Michael Burns.

This is a surprise, given how many of the alumni have returned - from original creators James Wan and Leigh Whannell as executive producers, Darren Lynn Bousman as director and Josh Stolberg and Peter Goldfinger as writers - promising a solid return. Yet it would seem that Saw’s box-office charm remains elusive to both experienced makers and enthusiastic admirer alike, given Spiral’s weak performance.

John Kramer has always been a fascinating figure, and episodes of the franchise helped us to move through his character development as the grand arc. With him gone, and the disciple and copycat premise explored, the studio turns Spiral into an investigative cop thriller instead. Sadly, the premise here is a dead horse beaten.

Rock is Detective Ezekiel “Zeke” Banks, a veteran unpopular at his station because he ratted a fellow cop out. He acts on his own terms, has a massive chip on his shoulder, is going through a divorce, and doesn’t want to be assigned his new partner - the black sheep anti-hero thing would be acceptable, if only his partner didn’t turn out to be his Myerr’s and Briggs’s predictable opposite.

Assigned to curb his renegade ways, rookie colleague William Schenk (Max Minghella) is the excited new kid on the block. He proudly announces his adulation for Zeke’s father, former station chief Marcus Bank (Samuel L. Jackson), shows off his family by tucking their picture in his partner’s car, and has his son’s name tattooed on his arm - we can take one cliche, but two?

Spiral does no one any favours with these tired tropes, and even less so when it’s hard to look past Rock’s lack of chemistry with his co-star. And let’s call it - some of this might have something to do with his very botoxed face. I’ve never felt so confused and (sorry, not sorry) unmoved looking at an angsty lead.

As cops at the station fall victim to the city’s new copycat killer, Banks must race against the clock to figure out the mastermind’s agenda. This is where loyal fans should find themselves appeased - the traps returns with their gory consequences, with rock-and-hard-place options testing their subject’s will to survive, but the new sequences feel tipped against the victim’s favour - and in some cases with the death shown first - thus taking the “poetic justice” piece out, leaving behind just mindless gore. Depending on what you deem as entertainment, the elegance of earlier chapters are lost in Spiral’s direction.

The franchise often winds up each chapter with breathless exposition, and Spiral’s no different. The film throws its fancy footwork of flashbacks and references together and whips it through a visual blend, but seasoned audiences may already have worked out the suspect much earlier on.

You see, this reviewer figures that the Saw formula of torture and justice still excites, as it speaks to our dark bloodlust. What the producers have cast in error, is to overstretch this philosophy and turned John Kramer’s meticulous and broader brand of vigilante into more of an individual’s self-serving form of punishment.

This episode stands on its own, and should be watched as such. Take Spiral more as a brief chapter instead of something meaty from the “Books of Saw”, and use it as a benchmark for further projects to move away from.

(The Saw DNA is still here, but poor handling and acting leaves the story shallow, if still bloody) 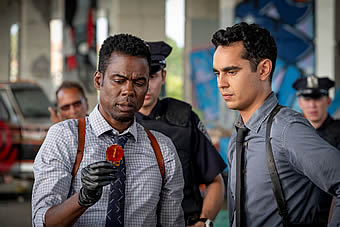 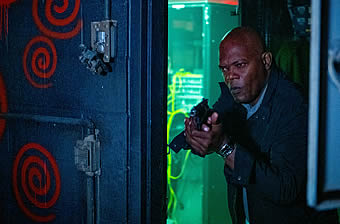 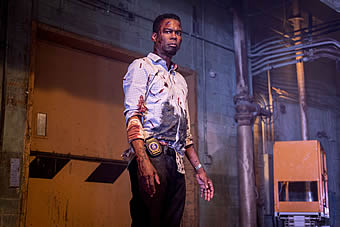 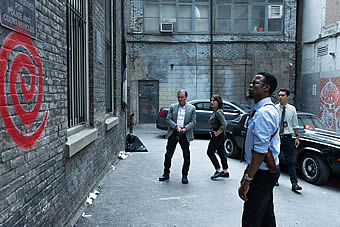 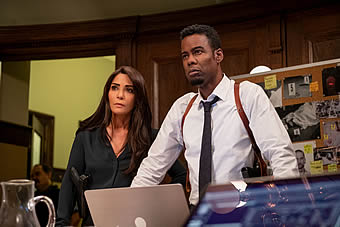 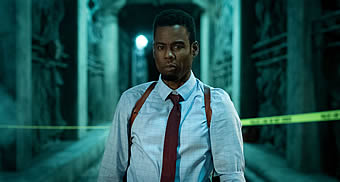