German born Hollywood director Wolfgang Petersen has passed away at the age of 81.

After the massive success of his World War II movie Das Boot, Petersen went on to Hollywood directing memorable classic blockbusters from In the Line of Fire, Airforce One to Outbreak.

Petersen has worked with a string of Hollywood leading men including Clint Eastwood, Harrison Ford, Dustin Hoffman, Dennis Quaid, George Clooney and Mark Wahlberg in The Perfect Storm and Brad Pitt in Troy.

RIP Mr Petersen.. and thanks for the memories. 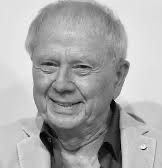