Joanna Dong, the lead actress of Wee Li Lin-directed feature film FOREVER, was given a Star Hunter award at this year’s Shanghai International Film Festival. A total of 10 of the most promising young actors in Asia are honoured at the inaugural edition of the Star Hunter award.

Joanna, who made her film debut in Forever, was on hand to receive the award. She is only one of the three being recognized from outside China with the rest of the seven coming from China.

According to the festival organizers, the 10 finalists were chosen from more than 1,000 applicants by a jury panel headed by Italian actress Maria Cucinotta, Hong Kong director Mabel Cheung and Vietnamese actress Tran Nu Yen-Khe.

After receiving the award, Joanna was also invited to sing a song at the Star Hunter award ceremony which was held on Jun 17 in conjunction with the Asian New Talents Award. 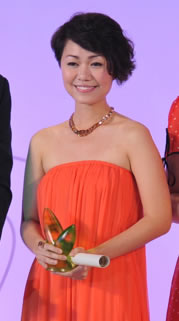