To me, modern action has nothing on period pugilistic pieces. Guns, lasers, cars and bombs rarely need skill, and filmmakers often depend on bigger explosions to one-up excitement. The clash of fists and swords in comparison, feels more elegant, and often results in a more satisfying payout. They are called martial arts for a reason.

It’s been a while since a title with a focus on sword fighting has come out from South Korea, and The Swordsman pulls no punches in delivering this key theme. Casting the charismatic Jang Hyuk in the lead as Joseon’s greatest swordsman, it’s a stylish piece decorated with heart-racing sequences and some inventive sword work. The story takes place in a chaotic slice of Joseon’s history, when the warring factions of the Ming and Qing Dynasties were suppressing the Korean monarchy. After the King Gwanghae falls to the schemes of his own ministers, his most trusted guard Tae-yul (Jang Hyuk) flees into the mountains with his infant daughter under his instruction.

After years of isolation, Tae-yul’s eyes deteriorate, and the now grown-up Tae-ok (Kim Hyun-soo) insists he seeks treatment in their nearby town. He reluctantly does so, and gets his first glance of Qing envoy and slave trader Kurutai (Joe Taslim), who happens to have a fondness for seeking out skilled sword fighters. Fortunately, our hero manages to slip away discreetly from his attention.

But circumstances sees Tae-ok being taken away as tribute and forces Tae-yul’s hand, so the father works up the hierarchy using his walking stick, and eventually unsheaths his sword against tougher opponents to save the girl. An old royal commander, Min Seung-ho (Jung Man-sik), catches sight of the Tae-yul and recognises the swordsman. Disillusioned by the new ministry, he begins to track down Tae-yul to uncover an old secret and perhaps settle an old score.

The Swordsman carries within it several threads, bundled in a decent plot which does get a little unclear at parts. The initial coup d’etat was brief with its motivations, and dignitaries had ambiguous agendas that would have benefited with better introductions. Thankfully, the main plot of a father’s sacrifice for his charge is clearly demonstrated, and something which Jang Hyuk strongly identifies within himself and presents remarkably.

We see Jang Hyuk’s brooding swordsman played with restraint, with an added layer of torture given his failing eyesight. This conundrum plays up tension well on the screen, disabling a figure with almost superhero skills with an achilles heel, but the actor also delivers richness with his nuanced expressions, even going as far as to blur his vision during practice to get a better sense of how his character should react during these fights.

On how he injects intensity with such subdued expressions, Jang Hyuk shares with MovieXclusive that this partly comes from how he approaches every movie as his first and having that same level of enthusiasm. “I‘ve also grown over the last 20 years from my life experience,” the actor shared. “I believe it has helped me express myself with more nuance on the screen and I hope you will continue to enjoy my performances.”

But if there is a contender for our attention, it would be the sword fighting sequences. The choreography here is a treat to watch. Tae-yul’s natural gift in martial arts lets him imbue his sword-fighting with unorthodox flair, and this flummoxes his opponents, but the wise king admires the freedom from the lack of discipline. It is expressed with swift flows as much as clashing strength, sharp jabs as well as fluid slashes, creating sparring episodes that are exciting and poetic - very much what makes these films so riveting. The boss fight is particularly inventive, and The Swordsman gives a refreshing update to the genre without trying too hard.

Another standout is Indonesian actor Joe Taslim, who possesses his own unique gravitas. His Kurutai is enriched with a natural admiration for great swordplay, which makes for a less straightforward but equally compelling villain journey. He presents this with supernatural charisma, making him a character you’ll love to hate, and this magnetic presence lets him hold his own against his South Korean co-stars. My only complaint - that his final fight with Tae-yul a tad short, because it was really that good. 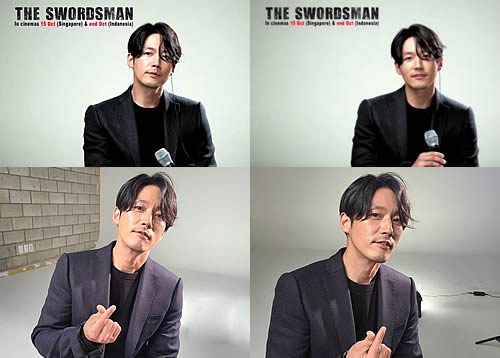