Make September a month of adventure and discovery, and watch five amazing and inspiring IMAX 3D documentaries at Shaw Theatres IMAX! Be prepared to be mesmerized by nature’s secrets, and be ready to be enchanted as each documentary is narrated by an award-­‐winning actors and actresses. It is immersive IMAX 3D at its best and it is the perfect family activity.

Journey to the South Pacific – Narrated by Academy Award® winner Cate Blanchett, Journey to the South Pacific will take moviegoers on a breathtaking IMAX® 3D adventure to the lush tropical islands of remote West Papua, where life flourishes above and below the sea. Join Jawi, a young island boy, as he takes us on a journey of discovery to this magical place where we encounter whale sharks, sea turtles, manta rays, and other iconic creatures of the sea. Home to more than 2,000 species of sea life, this exotic locale features the most diverse marine ecosystem on earth. An uplifting story of hope and celebration, Journey to the South Pacific highlights the importance of living in balance with the ocean planet we all call home.

To the Arctic – An extraordinary journey to the top of the world, the documentary adventure “To The Arctic 3D” tells the ultimate tale of survival. Narrated by Oscar® winner Meryl Streep, the film takes audiences on a never-­‐before-­‐ experienced journey into the lives of a mother polar bear and her twin seven-­‐month-­‐old cubs as they navigate the changing Arctic wilderness they call home. Captivating, adventurous and intimate footage brings moviegoers up close and personal with this family’s struggle to survive in a frigid environment of melting ice, immense glaciers, spectacular waterfalls, and majestic snow-­‐bound peaks.

Born to be Wild – Narrated by Academy-­‐ Award® winner Morgan Freeman, Born to be Wild 3D is an inspiring story of love, dedication and the remarkable bond between humans and animals. This film documents orphaned orangutans and elephants and the extraordinary people who rescue and raise them – saving endangered species one life at a time. Stunningly captured in IMAX 3D, Born to be Wild 3D is a heartwarming adventure transporting moviegoers into the lush rainforests of Borneo with world-­‐renowned primatologist Dr. Biruté Mary Galdikas, and across the rugged Kenyan savannah with celebrated elephant authority Dame Daphne M. Sheldrick, as they and their teams rescue, rehabilitate and return these incredible animals back to the wild.

Under the Sea – Narrated by Jim Carrey, Under the Sea 3D will transport moviegoers to some of the most exotic and isolated undersea locations on Earth, including Southern Australia, New Guinea and others in the Indo-­‐ Pacific region, allowing them to experience face-­‐to-­‐face encounters with some of the most mysterious and stunning creatures of the sea. It will offer a uniquely inspirational and entertaining way to explore the impact that global climate change has had on ocean wilderness.

Hubble – Through the power of IMAX® 3D, “Hubble 3D,” narrated by Leonardo DiCaprio, takes moviegoers on an unprecedented voyage through distant galaxies to explore the grandeur and mystery of our celestial surroundings. Experience never-­‐before-­‐seen 3D flights through the farthest reaches of the universe, and accompany spacewalking astronauts on some of the most difficult and important endeavors in NASA’s history. 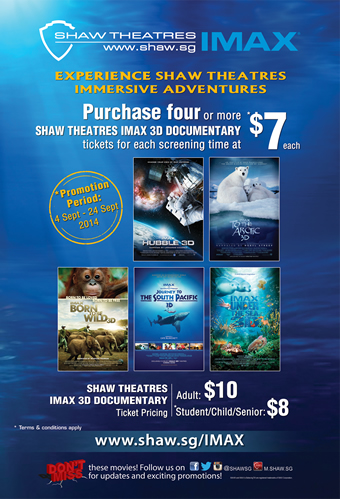