Hunter Hayes' Tribute Video To The Unsung Heroes of Singapore

This National Day, Warner Music Singapore would like to celebrate our nation’s 49th birthday by recognizing the daily contributions of everyday Singaporeans – the unsung heroes of Singapore.

The concept of the video was inspired by the lyrics of Hunter Hayes’ powerful hit single “Invisible”, lending light to society’s oblivion to the significance of the roles of these unsung heroes, and most importantly, letting them know they are valued and definitely not invisible.

These labels that they give you
Just 'cause they don't understand
If you look past this moment
You'll see you've got a friend
Waving a flag for who you are
And all you're gonna do
Yeah, so here's to you
And here's to anyone who's ever felt invisible

Shot on location in Singapore recently, it was directed and produced by Divian Nair from home-grown production company, Storyteller Productions. The homage video brings together storylines of individuals of different ages, gender and background as a reminder that no matter who you are, we have all felt invisible at some point in time. It sees Hunter Hayes and an enthused group of young Singaporeans, going around different locations of Singapore, encouraging and recognizing these heroes who are ever present in our day-to-day lives.

With the timely visit by Hunter Hayes for album promotions in Singapore, it was good opportune and our greatest privilege to have Hunter as part of the shoot and also, to lend more meaning to the tribute video.

Hunter says, “We already had a video for ‘Invisible’, but we wanted to do something different. We wanted to celebrate the people that make this place so beautiful. It's an inspiring place, and we've definitely felt that. And one of the things we wanted to do is honour the everyday people who often don't get the recognition they deserve, for the ways that they change your lives so much.” Warner Music and Hunter Hayes would like to encourage fellow Singaporeans to join in this movement and take a moment to appreciate someone for who they are; a simple gesture of saying “Thank You” and letting them know that they are not invisible.

But this doesn’t stop here. In the spirit of paying it forward, there will be an online campaign to multiply our efforts and to get more Singaporeans involved. Simply show your “Thank You” to your unsung hero by uploading your photo and hashtag #YouAreNotInvisibleToMe on Facebook, Twitter and Instagram. 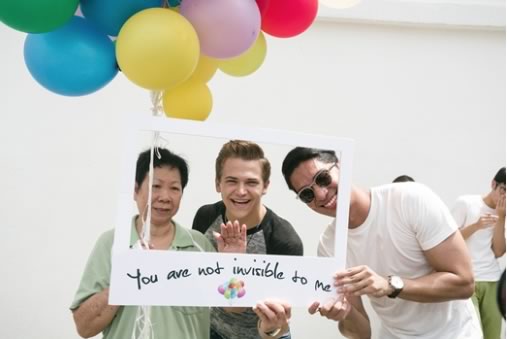