SOUL MATE 《七月与安生》, which receives 7 nominations at the upcoming 53rd Golden Horse Awards, will be hitting the big screens in Singapore on 10th November! Director Derek Tsang, who is nominated for the Best Director Award, will be in town to promote the movie on 3rd November!

Besides meeting the press during the Singapore junket, Director Derek Tsang will also be attending the SOUL MATE Singapore Gala Premiere presented by Now Baogu Movies.

SOUL MATE is a coming of age drama between two very good friends, Qi Yue (Ma Sichun) and An Sheng (Zhou Dongyu). They were inseparable and believed that their friendship will last forever. However, the cruelty of youth reared its ugly side when both of them fell for the same man - Jia Ming, when they turned 18. How will things evolve? Will Jia Ming wreck the friendship between Qi Yue and An Sheng from then on? SOUL MATE opened in cinemas earlier on 14th September in China and collected a stunning RMB 170 million till date; and was subsequently released on 23rd September in North America and 27th October in Hong Kong. 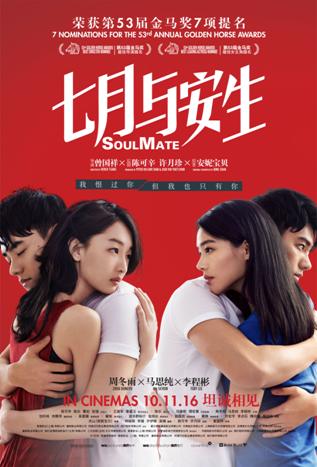