With strong competition from other Hollywood blockbusters like Independence Day: Resurgence, Teenage Mutant Ninja Turtles: Out of the Shadows and Now You See Me 2, Bounty Hunters is now standing at No. 2 in the China Box Office. As of today, total collection of BOUNTY HUNTERS Box office in China is at RMB 1.4 Billion.

The short video reveals violent action scenes between five Bounty Hunters: Lee Min Ho, Wallace Chung, Karena Ng, Tiffany Tang and Louis Fan and ‘madman’ Jeremy Jones Xu. The big-budget film sees the huge effort put into the set designs and effects in the movie. The clip also revealed the high morale on-set with actors and actresses sharing laughter. However, the filming was not all smooth-sailing with unanticipated injuries sustained by the actors ? Lee Minho landed on his head during a fighting scene while Wallace Chung experienced eye discomfort from a gun blast fragments. The actors displayed their professionalism despite their injuries and filming continued. 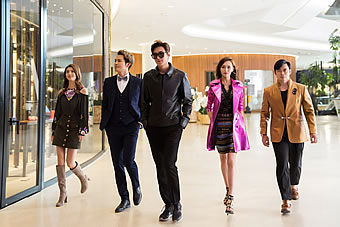