Synopsis: Universal Pictures will release Steven Spielberg's groundbreaking masterpiece "Jurassic Park" in 3D on April 5, 2013. With his remastering of the epic into a state-of-the-art 3D format, Spielberg introduces the three-time Academy Award®-winning blockbuster to a new generation of moviegoers and allows longtime fans to experience the world he envisioned in a way that was unimaginable during the film's original release.

Very few live action movies get the 3D re-release treatment - for one, their conversion is harder to accomplish than animated films; and for another, there’s also the worry that adults are more naturally sceptical of paying extra dollar to watch a movie with that extra dimension, seeing it as no more than a gimmick. So the question you’re probably asking about ‘Jurassic Park 3D’ is - is it worth shelling out box office money to watch the same movie in stereoscopy that you could otherwise watch on a Blu-ray/ DVD/ VCD/ video tape or even on Channel 5?

Well, the answer is both yes and no. Yes, because Steven Spielberg’s groundbreaking action blockbuster was always better off enjoyed on a big screen; and no, because the 3D doesn’t make the movie significantly more thrilling than it already is. Indeed, how much you enjoy ‘Jurassic Park 3D’ will likely depend on whether you have seen it and if so, how much you like it. And here’s where we start revealing our bias - ‘Jurassic Park’, in our opinion, is truly a timeless classic.

Not just for pioneering some of the most advanced special effects of its time, the movie was an intelligent sci-fi action adventure that had something for everyone. At first sight, it’s easy to dismiss it as no more than an attempt to boost sales at the similarly-titled theme parks at multiple Universal Studios around the world - ours included. But really, its concept was first borne out of a bestselling novel from techno-thriller savant Michael Crichton, who intended it as a cautionary lesson towards mankind’s relentless pursuit of using technology to not just harness nature but in fact to control it.

The fact that Crichton bandied complex ideas like cloning and the Chaos Theory meant it wasn’t going to be - pardon the pun - a walk in the park to adapt the book. But in the hands of one of the best living directors in Hollywood, the big-screen adaptation became rollicking entertainment for the whole family, losing none of its academic concepts or its eco-message for the more savvy sci-fi viewer at the same time. Cannily aware of the lure of such a premise, Spielberg sought to convey the same wide-eyed wonder such a theme park with live dinosaurs would no doubt bring to its visitors if it were real.

He does a brilliant job transporting his audience into the surrealistic world of ‘Jurassic Park’, and within that two hours, successfully turns that experience into one of white-knuckle tension and sheer terror as anything and everything on the park goes amok. Who can forget the first time the T-Rex makes an appearance in its full glory, beginning so memorably with a series of tremors reflected in a glass of water? Or the pair of Velociraptors which had developed the amazing ability of opening doors and played a cat-and-mouse game with a pair of children in the kitchen?

Whereas most modern-day action movies are built around a number of major setpieces, Spielberg uses the entire park as one giant setpiece, unfolding the action on multiple fronts at the same time to ensure a consistently gripping edge-of-your-seat ride. And because many of the shots are designed to immerse the viewer into the scene, the 3D conversion isn’t entirely a waste of time. The depth makes a perceptible difference in many sequences that matter - in particular, it seems that Spielberg and his team at StereoD have paid special attention to the ones with T-Rex, and whether stationary or in motion there is an eye-popping quality to the fearsome predator.

Still, if you were to ask us whether those same sequences are as good without the added dimension, we’re inclined to say yes. There is good reason why the movie was the highest grossing movie of all time until James Cameron’s ‘Titanic’ came along four years later, and that was clear even without having to put on any glasses. Using the veritable power of storytelling, Spielberg has made a movie that is as engaging and entertaining whether you were a 12-year-old kid in the cinema twenty years ago or a 32-year-old adult now wearing them 3D spectacles. More than any stereoscopy, the joy is in reliving this on the big screen, or introducing your kids to how it was meant to be seen. 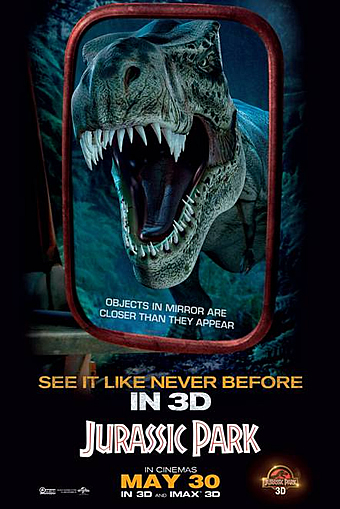