It’s August 25, the opening weekend of sci-fi comedy Iron Sky – and we find Englishman Lee Stringer in the Preview Lounge of Orchard Cineleisure, of which the two most noteworthy features are (appropriately) a towering stand-up poster for the movie and (less appropriately) a troublesome clump of wires dangling between a laptop and a wall-mounted LCD screen. The computer graphics supervisor of this year’s surprise €7.5 million (S$11.7 million) hit is keen to show off a making-of featurette but the spluttering screen has other ideas. “Give it some time,” he wryly notes.

Created with a Finland-based visual effects team of just over 20, the production of Iron Sky did not exactly share this luxury of time. Stringer, 44, had hopped aboard the project in the middle of last year, working on most of the scenes in the opening and closing sections of the movie. He waxes lyrical about the swastika-shaped space fortress seen in the opening shot – discovered as a US astronaut peers over the dark side of the moon. “We had this strange and wacky idea about putting this obnoxiously huge structure on the moon and it kind of sums up a lot of what we were trying to do with the movie,” he says.

It’s a sort of playfulness that both Stringer and the movie needed. Acknowledging that it was the uncanny combination of luck and misfortune that tied him up with director Timo Vuorensola for the project, Stringer explains that he was supposed to return to Singapore to do a job (he had worked with Lucasfilm Animation Singapore on television series Star Wars: The Clone Wars) last year. “It fell through at the last moment. Literally the next day, I saw a posting online and I leaped. One project had fallen through and another happened to come along,” he says. “I sent them an e-mail and within a week, I was on a plane to Finland.”

At the same time, this playfulness has pushed Iron Sky into its own unique territory. How else would you explain the presence of motorbike-riding German soldiers on the moon or the ability of the people in the aforementioned space fortress to survive without a plausible supply of food? “I think anybody who goes to see Iron Sky expecting a serious, powerful experience is completely missing the point. You just got to go in with your brain mostly turned off and with a big bag of popcorn – and just go along with the ride,” Stringer says.

Not surprisingly, the plot deals with a bunch of German soldiers and civilians who have escaped the destruction of their homeland during the last moments of World War II by fleeing to the dark side of the moon. In the proceeding 70 years of complete secrecy, the Germans have conjured a massive army of space Zeppelins and flying saucers in addition to a mind-blowingly huge flying fortress that can blow off chunks of the moon with ease. The Germans declare war on Earth after a landing on the moon by US astronauts is misinterpreted as a spying mission. What ensue are hilarious acts of misunderstandings between the space Germans and humans living on the Earth and an all-out battle to destroy the flying fortress.

You have worked on many space-themed shows including Star Wars: The Clone Wars, Battlestar Galatica, Terra Nova and now, Iron Sky. Are you fascinated by space?

Yes, of course. I grew up at the end of the space race in the 60s. I was born just before man first landed on the moon but it was still a new thing when I was growing up. There were people going into space and of course, science fiction on TV, film and books. So when I was a kid in the 70s, there was a fascination with space and science fiction because it seemed that everything was moving forward very quickly. When Star Wars came out in 1977, everything changed because any kid who saw that film knew that a whole spectrum of visual effects was now possible. Star Wars had changed people’s lives because it had given them ideas on what they can achieve with visual effects.

What was the inspiration behind the designs of the spaceships in Iron Sky?

It was a fascinating period but it was also when urban legends and conspiracy theories about German flying saucers developed. What if the Germans took a whole bunch of people in these and flew off to the moon? We went from there and just went crazy with the idea. The design art was really about taking that era of technology and isolating it on the moon and having it develop over 70 years with no influences from the rest of the world.

Iron Sky had just over 20 visual effects artists working on it and a small €7.5 million budget. What were the challenges faced?

We had incredibly limited resources. We did not have enough computers for the rendering, we had taped cables on the ceilings, the servers were overheating all the time and the air-conditioning wasn’t working. It was in this sort of situation that we became more creative. What mattered was that we had a bunch of people who were very enthusiastic and skilled. Everyone believed in the vision they got from the director Timo and people like me who came on-board to help them. We were working crazy hours but it wasn’t like anyone thought the project wasn’t going to work. I think the adversity and limitation actually created more inventive solutions.

Do you think Iron Sky could have benefitted from more resources?

With more money and time, I think we could have done more with the space Zeppelins. We never got to see the control room. I would like to see more of the launching phase where the flying saucers are getting out of the Zeppelins and there are guys actually getting into these flying saucers. And more shots of artillery and guns. It would be ridiculousness on top of ridiculousness. 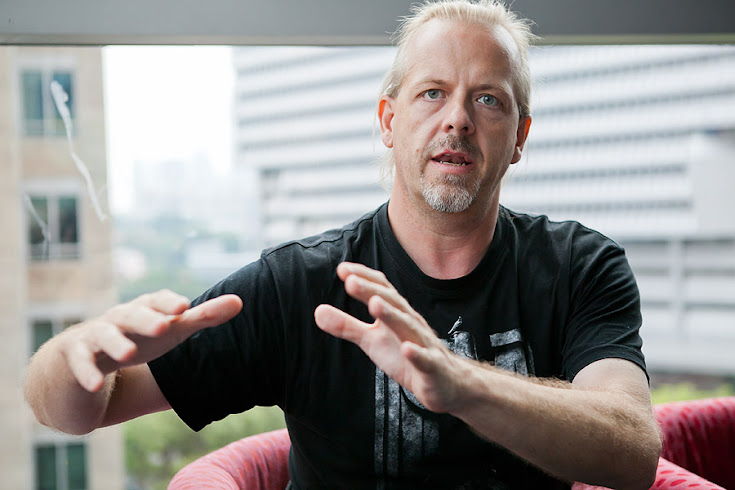 Which is your favourite part of Iron Sky?

I think the Zeppelins have to be it. Those Zeppelins are huge! During the World War I era, the US even had experimental aircraft carriers that were not Zeppelins, but airships that biplanes could launch out of. So Iron Sky was just taking what was done almost 100 years ago and making it 50 times bigger and better. And of course, I really like how the Germans tow the asteroids and use them as weapons, throwing them onto the Earth.

So to sum up, the essence of Iron Sky is …

What are the types of film you would like to work on in the future?