You’re spoiling us, Mr Williams. As if the wonderful score for The Adventures of Tintin wasn’t enough, you have decided to indulge us with yet another lovely piece of work. Two John Williams score in a year? We are in heaven.

For this moving film about the friendship between a boy and his horse, Steven Spielberg’s long time collaborator takes on a different direction from the animated feature’s adventurous score and returns to an old fashioned romanticism that brings to mind lush landscapes and grand grasslands.

The 65 minute album opens with “Dartmoor, 1912” and wastes no time in introducing the soundtrack’s main theme. Elegant and tenderly passionate, this theme is repeated in following tracks and you’d be swept off in awe. This gorgeous theme will also probably be the tune you hear when the movie title is mentioned during film awards.

That said, we are pretty sure Williams will be getting his 46thAcademy Award nomination (he has already won five for 1971’s Fiddler on the Roof, 1975’s Jaws, 1977’s Star Wars, 1982’s E.T. the Extra Terrestrial and 1993’s Schindler’s List) at the upcoming Oscars. We’d really like to see him nominated for both scores, and take home that statuette for the sixth time.

Probably due to the nature of the film, there are several playful cues which will easily create images of horses galloping mischievously on open lands. This is evident in “Learning the Call” and “Seeding, and Horse vs. Car”. Things become a little darker in cues like “Ruined Crop, and Going to War” and “The Charge and Capture”. Like any other war movie, this soundtrack features action pieces like “Pulling the Cannon” and “No Man’s Land”.

Our emotions are stirred in heartfelt tracks like “The Death of Topthorn”, “The Reunion”, and “Remembering Emilie, and Finale”. And like any other Williams score, this one ends on a perfectly, rounding up the best moments of the film with “The Homecoming”. We are indeed blessed to have a talent like the 79 year old Williams creating magical and wondrous movie moments for us with his compositions. 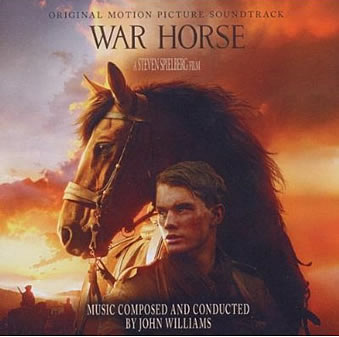