Cinema goers are so used to 3D CG talking pandas (it helps that there are lots of kung fu action too!) that traditional 2D created bears like Winnie the Pooh have been given the cold shoulder. Here in Singapore, the Walt Disney animated film has been removed from the schedule, probably due to box office concerns. Thankfully, we still have music labels that are kind enough to bring in this soundtrack album which transports us to Hundred Acre Wood through 18 adorably pleasant tracks.

As if the album cover isn’t charming enough to cheer up the gloomiest day (the pastel coloured visuals of a smiling Winnie and a confused Piglet just make us smile), the soundtrack kicks off with a lovely rendition of the classic “Winnie the Pooh” theme song. Performed by Zooey Deschanel (the talented actress is also one half of the American indie country duo She & Him), the song brings back many sweet memories of the beloved cartoon series based on A. A. Milne and E. H. Shepard’s works. Deschanel also performs the cutesy “A Very Important Thing To Do” and the standout track “So Long” on the 46 minute album. Her collaborator M. Ward also contributes to the music.

Elsewhere, the delightful Winnie, Tigger, Piglet (and even the pessimistic Eeyore) perform songs like “The Tummy Song”, “”The Backson Song” and “Everything is Honey” from the movie. These agreeably pleasurable tracks will brighten up the lousiest day and have you beaming widely.

The score composed by Henry Jackman (Monsters vs. Aliens, X Men: First Class), though in no way spectacular, is as enjoyable as reading your favourite storybook on a lazy afternoon. “Pooh Greets the Day” is a bouncingly merry cue which introduces us to the carefree world of Hundred Acre Wood. The score section infuses the Sherman Brothers’ (the American songwriting duo responsible for the signature music from many of Winnie the Pooh’s adventures) old school appeal with woodwinds and strings. We are also pleasantly surprised to find half of the album dedicated to Jackman’s pleasing score.

If you are a fan of the Hundred Acre Wood gang, then this soundtrack is undoubtedly a must own. If not, you may also want to get a copy and have it on standby on a dim and overcast day – this, in our humblest opinion, can do wonder to perk up your spirits. 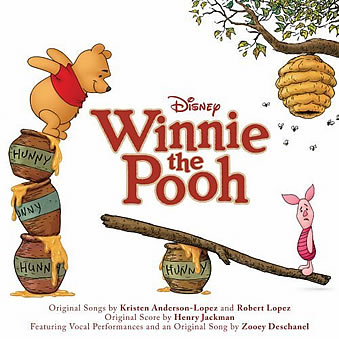