Synopsis: Welcome to a world where time has replaced money as the universal currency. The wealthy have accumulated thousands of years, allowing them to live forever, while the poor beg, borrow, and steal enough minutes to make it through the day. In this world, Will Salas (Justin Timberlake) is one of the unlucky ones, waking up every morning with 23 hours left on his ticking clock, and the knowledge that if he doesn't earn enough time, he won't live to see tomorrow. But Will's fortune takes an unexpected turn when a wealthy stranger turns up dead, and Will finds himself 100 years richer. Now the prime suspect for the man's murder, Will is on the run for his life, searching for the real killer with the help of a beautiful young woman (Amanda Seyfried), who is the only one who believes he is innocent.. Movie Review:

Andrew Niccol's Gattaca remains one of my favourite science fiction films, and from that acclaimed debut he's directed only 2 other films with S1m0ne in 2002 and Lord of War in 2005. It's a 6 year wait for his latest science fiction offering In Time, boasting a wonderful premise with links to gene manipulation that's almost aligned to his debut feature, and using the concept of Time as currency, where everyone ceases to age at 25 thanks to the identification of the culprit gene, and one's lifespan thereafter would be controlled by a literal ticker that counts down to zero, after which one's life will end if one doesn't have enough to top up, through working, begging, borrowing or stealing.

Current Hollywood It boy Justin Timberlake continues his good run this year in Tinseltown playing Will Salas, a poor young man from the slums who with the rest of his community, live from day to day and very much hand to mouth, with work barely earning enough Time to keep themselves alive, and inflation shooting through the roof in recent times. But despite the hardships life is pretty content with mom Rachel (Olivia Wilde) until the trailer unfortunately spoils it all, and Will decides to fight the system soon after a benefactor (Matt Bomer) wills him a century's worth of time before committing suicide, and Will is being accused of murdering him instead. So begins a life on the run with the poor little rich girl Sylvia Weis (Amanda Seyfried) whom he holds hostage from her father's swanky party, and Cillian Murphy's Timekeeper aka cop character breathing down his neck every step of the way.

There are plenty of interesting thoughts and bright spark ideas that went into the background of the film, such as the cheeky play with the concept of age when one looks at a woman, but just cannot guess what her social status, or relationships are with the men around her, since every grandmother, mother and daughter are at their prime of age 25, and can very much pass off as peers or sisters. Olivia Wilde as Justin Timberlake's mom will give you the clue as to this magnitude of a social road block. Everyone's at an age of invincibility, although deep inside, they are already mature beyond their physical selves which do not betray their true ages. Or how the powerful and the corrupt are always so zealous in protecting the status quo which have benefitted them, and are paranoid in doing so to maintain their grip on power. Some universal themes never change, especially when currency continues to exist in any form.

Niccol's story was also intricately detailed that it sets up and builds an entirely new universe altogether, painting vastly different environments in his world where blue collared workers get separated from the white collared, with the poor being left to fend for themselves in segregated quarters from the rich, where moving up the social ladder literally meant putting down some blood money in order to cross physical barriers that separate the haves and the have nots. A simple process gets crafted that deals with how people get paid in time from seconds to centuries, and the mode of transfer being as easy as gripping the other by the arm, and wiring the currency over telepathically. It worked wonders here, setting up for many slow-motioned moments with the run against time for topping up before the counter hits zero. And running, is what this film has by the bucketloads with poor people ingrained with having to zip from point to point non-stop in order to save and shave precious seconds from tasks, contrasting with the rich who can almost always afford to take it easy, and enjoy life at a significantly slower pace.

But unfortunately, in Niccol's eagerness to bring us on a tour of the insides of this newly created world with its own rules and regulations, the story found itself heading nowhere, except in circles and clearly not having a definitive, satisfying objective in order to leave the door wide open for any future expansion possibilities, even in a different medium altogether. There's too much talk and not much of a walk, with interest and probably fear being that the audience may be too far detached from the science fiction elements of the film, that a lot more care has been taken to fully explain each action and step of the way. For a film medium, this turns out to be unnecessarily talky, and dragged out scenes for far longer than they should.

With the Stockholm Syndrome, Seyfried's Sylvia and Timberlake's Will soon become the futuristic version of Bonnie and Clyde, seeking out thrills and frustrating the powers that be when they try to even the score and narrow the Time currency gap by robbing banks, and fueling a distribution point for Time amongst the poor where everyone and anyone can get a piece of life extension, for free. This of course runs counter to the system set up for law and order, and puts them in direct confrontation with the Timekeepers. Do not however expect big bang, spectacular action sequences, as these were largely absent in lieu of simpler battles that look tame by today's standards. And what more, Will's initial rage against the system really saw him being quite clueless about where to begin venting his pent up vengeance, with love coming into play, and personal pain being thrown out the window. It had built up a lot of story to tell, but decided to only run with the simplest of the lot instead.

Ultimately you can't help but to feel that In Time is nothing more than an effort to buy time for building up either an MMPORG or a television series with both Sylvia and Will immortalized as some cult hero, and you either get to play a spin off character from the film, or get to watch a new set of characters operating within the confines of this new world under flux for the goggle box.

(Plenty of running against time, but ultimately leading nowhere) 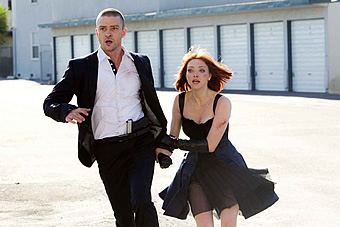 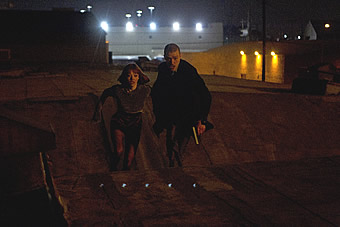