Synopsis: 127 HOURS is the new film from Danny Boyle, the Academy Award® winning director of 2008's Best Picture, SLUMDOG MILLIONAIRE. 127 HOURS is the true story of mountain climber Aron Ralston's (James Franco) remarkable adventure to save himself after a falling boulder crashes on his arm and traps him in an isolated slot canyon in Utah.  Throughout his journey, Ralston recalls friends, lovers (Clémence Poésy), family, and the two hikers (Amber Tamblyn and Kate Mara) he met before his accident.  Over the next five days Ralston battles the elements and his own demons to finally discover he has the courage and the wherewithal to extricate himself by any means necessary, descend a 65 foot wall and hike over eight miles before he is finally rescued.  Told with a dynamic narrative structure, 127 HOURS is a visceral, thrilling story that will take an audience on a never before experienced journey and prove what we can do when we choose life.

The hype for "127 Hours" goes that early audiences needed barf-bags and medical attention during the film's more viscerally involving sequence but perhaps the most gut-wrenching response to the film comes from its central question: What would you do to survive? Yes, the "Saw" franchise has been crassly querying audiences about that for almost a decade now but with Danny Boyle, it all adds some class to the proceedings that surround the true story of adventurer Aron Rosten's (James Franco) memoir “Between a Rock and a Hard Place," about his ordeal in the gorgeous and isolated Blue John Canyon, Utah where he was trapped in crevice with his right arm stuck between a boulder and a rock.

As much as a tactile film-making experience as you will be likely to see anywhere, Boyle's style complements Aron's personality as man who wants to feel and experience the world one stone at a time. Like survival horror done with the verve and narrative flair of a visualist like Boyle who can tap into the manic psyche of those who want and need more from their given reality, "127 Hours" presents a heightened emotional drive that comes from a truly human place of survival that digs into the nature of life. It can be said that in those few days, with half a bottle of water and a modicum of food reserves, Aron might have very well discovered something profound about life itself. Like Sean Penn's "Into the Wild," that deals with yet another true-life adventurer Christopher McCandless' trek into the Alaskan wilderness that led him to his doom, Boyle and fellow screenwriter Simon Beaufoy digs into life before the fact as well as an amalgamation of different ways to document the scenario. In McCandless' story, he leaves journals behind while Aron films a series of face-to-face confessionals with his video camera when he finally understands that he might not make it -- when optimism begins to fade. There remains a good sense of psychology coming from the deprivation that Aron endures, the plight of a multitude of regrets and of a life lived -- when it is said that it flashes before our eyes -- and the awareness of desires becoming salient as well as the mirages of hope glimmering like a particularly poignant shot through the crevice, through the canyon and into Aron's car where he left some food reserves

Boyle's highly tuned aesthetics becomes powerfully rendered by James Franco's terrifically gutsy performance that embodies the written character down to a tee, he turns from a cocksure adrenaline-junkie to a humbled survivor in a compact 79 minute baptism of fire. While Boyle's visual flourishes could be seen as gratuitous or indulgent, it gets carried through my A.R. Rahman's music-video techno score signifies the rush of its protagonist and the absurdity of life's twists and turns and never falters. Boyle's endeavours help the harshness of the material go down easier, and leaves audiences on a grace note of courage and hope.

(Tactile and at once graceful, "127 Hours" is a bundle of fears, anxieties, epiphanies and hope) 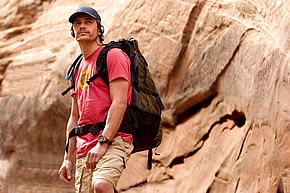 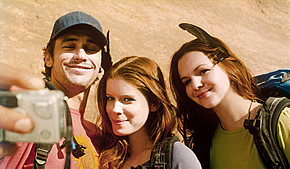 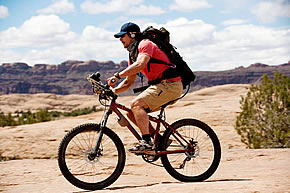