SYNOPSIS: In this thrilling Western, a young boy, Rio (Jake Schur), is forced to go on the run across the American Southwest in a desperate attempt to save his sister (Leila George) from his villainous uncle (Chris Pratt). Along the way, he encounters Sheriff Pat Garrett (Ethan Hawke), on the hunt for the infamous outlaw Billy the Kid (Dane DeHaan). Rio finds himself increasingly entwined in the lives of these two legendary figures as the cat and mouse game of Billy the Kid’s final year of life plays out. Ultimately Rio is forced to choose which type of man he is going to become, the outlaw or the man of valor, and will use this self-realization in a final act to save his family.

Instead of making another Western about the infamous outlaw, Billy the Kid, director and co-writer Vincent D’Onofrio (Netflix’s Daredevil, Jurassic World) crafted a slow-pacing story about truth and respect largely told through the eyes of a 14-year-old kid, Rio (newcomer Jake Schur) who is on the run after killing his abusive father.

On the way to the home of his mother’s friend, Rio stumbles upon the hideout of Billy the Kid (Dane DeHaan) and his gang.Lured by the charismatic Billy, Rio looks up to him as if he is his surrogate brother not knowing that Billy is actually manipulating the young man. At the same time, Billy is captured by the sheriff of Lincoln County, Pat Garret (Ethan Hawke). Rio soon finds himself trapped inbetween the good and the bad and he must make the final decision of sticking with the correct side at the end of the day.

The Kid feels more like a coming-of-age drama rather than a gritty Western as the screenplay struggles with its characterization and narrative. Simply put, it’s a Western that talks too much and too little on the gunplay. The promising prologue and subsequent proceedings established several interesting characters and motive but clearly, none of the setup actually kicks into high gear by the time the movie hits the one hour plus mark.

The standout factor is the casting of Chris Pratt, yes Star Lord who plays the sadistic uncle of Rio. Almost unrecognizable with lots of facial hair, Pratt is genuinely creepy as he joins his The Magnificent Seven co-stars though it’s kind of a pity that his role is reduced to an extended cameo. Hawke and DeHaan provides most of the scenery-chewing and Schur is a potentially a solid young actor to look out for.

Even with D’Onofrio’s best attempt not to tell a generic, formulaic Western, The Kid takes itself too seriously to be truly entertaining despite a high level of testosterone level. Technicalities are impressive and that applies to the entire cast performance as well but ultimately it’s an unmemorable Western.

Making The Kid is a brief 9 minutes making-of feature

The DVD provides a serviceable Dolby Digital 5.1 soundtrack which features solid audio, ambient and gunfiring effects. Visual quality is commendable for a DVD although certain low light situations are on the weak side. 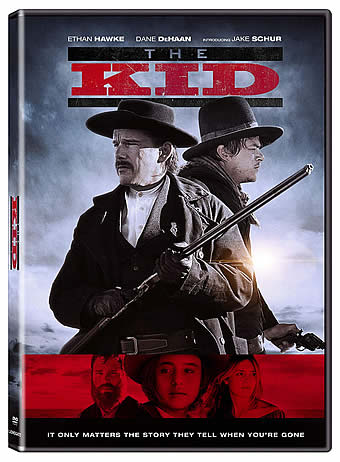