SYNOPSIS: When an NYC cop (Adam Sandler) finally takes his wife (Jennifer Aniston) on a long promised European trip, a chance meeting on the flight gets them invited to an intimate family gathering on the Super Yacht of elderly billionaire Malcolm Quince. When Quince is murdered, they become the prime suspects in a modern day whodunit.

Audiences might have avoided Adam Sandler on the big screen but they certainly love him on Netflix since the streamer has confirmed his latest comedy, Murder Mystery has the biggest opening weekend ever for a Netflix original flick.

Teaming up with his Just Go With It’s co-star Jennifer Aniston, Sandler stars as a low-ranking NYPD policeman, Nick who got embroiled in a murder mystery while on a long-delayed honeymoon with his hairdresser wife, Audrey (Aniston). After accepting a suave billionaire Charles Cavendish’s (Luke Evans) invitation to join him and his family on a party onboard a luxurious yacht, as the only Americans around, Nick and Audrey Spitz becomes a fumbling French Inspector Laurent Delacroix’s (Dany Boon) prime suspects when Charles’ ultra-rich uncle (Terence Stamp in a cameo) is killed onboard while preparing to sign his final will.

Thus it’s up to the Spritzs to clear their names or risk being kill by the real murderer who is still at large. Is it Charles Cavendish himself, his ex-fiancée Suzi, actress Grace Ballard (Gemma Arterton), racer Juan Carlos Rivera, Colonel Ulenga and his Russian bodyguard or Maharajah Vikram?

Written by James Vanderbilt (Zodiac, The Amazing Spider-Man), Murder Mystery is Adam Sandler’s version of an Agatha Christie murder mystery. Sandler and Aniston obviously are no Hercule Poirot and Miss Marple but their combined chemistry is funny enough to forgive Sandler’s earlier Netflix stuff liked The Ridiculous 6 and The Week Of. The whodunit comedy comes equipped with plenty of the duo’s perfect comic timing and a few laugh-out-loud lines from Nick and Audrey Spitz, probably a mix of Vanderbilt’s witty scripting and Sandler’s improvisation.

For a detective mystery, Murder Mystery at the very minimum delivers a madcap chase throughout Monaco and Lake Como and that includes a silly gunplay at a library and an assassination gone wrong in a hotel room instead of brainy twists and turns. The entire affair is foremost a lighthearted, amusing adventure that you won’t really bother about the fact that Luke Evans obviously is not the killer and ex-Bond girl Gemma Arterton who has not been seen in a while might play a bigger role.

Once A-listers Sandler and Aniston delivers a very entertaining TV movie with Murder Mystery despite Sandler’s less than impressive records in recent years. Even with a handful of off-color jokes at times, the hit streaming flick might be the top household choice especially with this year’s underwhelming blockbuster offerings. 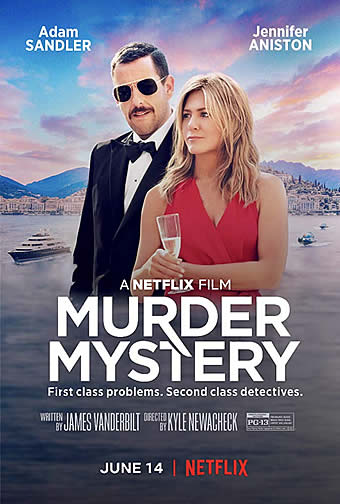