Synopsis: When a Hong Kong celebrity is found brutally murdered, his body floating in the middle of the ocean, hardheaded detective Lam is called in to take charge of the investigation. As Lam zeroes in on a killer from the past, the murder appears to be a straightforward case of revenge. But the more that Lam pursues his suspect, the deeper he falls into a web of lies. To find the truth, Lam must dig into a 20 year-old case for answers, the one link tying the suspect to the celebrity. But in doing so, Lam will uncover a dark secret so shocking, it will turn the investigation upside down. Who is the victim and who is the killer? Just as Lam believes he has everything figured out, he will discover that there’s a fine line between love and hate.

Not often do you get two of Hong Kong’s best actors together on the big screen, so the pairing of Nick Cheung and Simon Yam alone should interest you in the mystery thriller ‘Nightfall’. Alas if you’re looking for this latest Roy Chow Hin-Yeung film to be as gritty and compelling as Dante Lam’s ‘Beast Stalker’ or ‘The Stool Pigeon’, you’re likely to be quite disappointed- because both actors are essentially wasted in a movie that is too caught up in its own self-seriousness for its own good.

To be fair, we probably should have kept our hopes low, knowing that Chow is once again teaming up with his directorial debut ‘Murderer’s’ screenwriter Christine To. Anyone who’s seen the latter film will know that it was quite simply one of the worst movies of that year, with an infuriating twist ending that all but turned its heavy-handed proceedings into unintentional comedy. Thankfully, To avoids that mistake this time, opting for a far more straightforward mystery that nevertheless still requires a significant suspension of disbelief on the part of her audience.

As formula would have it, the film starts off with two seemingly unrelated murder cases that grow increasingly intertwined as the story progresses. On one hand is a gruesome murder committed twenty years ago of a young teenage girl named Eva (Janice Man), whose convicted murderer was her boyfriend Wang (Nick Cheung). Shortly after Wang’s release from prison, Eva’s father- the acclaimed classical tenor Han Tsui (Michael Wong)- is found brutally murdered and dumped into the sea near his sprawling mansion up in the mountains.

Investigating the case is the disillusioned veteran Lam (Simon Yam), who obsesses over previously closed cases of death by suicide, convinced that- like the death of his wife five years ago- they weren’t accidents. Lam sees a connection between Han Tsui’s death and Wang after recognising a striking resemblance between Han’s daughter Zoe (also played by Man) and Eva. Of course, we know as much from the scenes of Wang stalking Zoe in her residence, going so far as to acquire a village hut opposite Zoe’s house and using a telescope to observe what goes on in the house.

Any hope that the film lives up to the promise of the trailer of an intriguing whodunit is quickly dashed when one realises that the movie only revolves around these few players as well as Eva’s distressed mother. You’ll probably guess right at the start that it isn’t simply a crime of vengeance, though Han- as the domineering parent- had disapproved of Wang’s relationship with Eva all those years back. Indeed, what transpires comes closer to a Greek tragedy, made no less subtle by blatant overacting and an overly zealous score from Japanese composer Shigeru Umebayashi.

Guilty of the Aaron Kwok brand of overacting in ‘Murderer’ this time is Michael Wong, whose violent outbursts at what he perceives as his daughter’s disobedience comes off histrionic and ultimately contrived. There is too little subtlety in his over-the-top performance, and not enough motivation for us to believe in his character’s propensities. The fault isn’t entirely Wong’s, since his character- despite being a key supporting player in the scheme of things- is thinly drawn.

The same can be said of almost all of the characters within the movie. Other than being a doppelganger for Eva, Zoe is cast too simply as the meek goody-two-shoes living in fear of her father’s temperament. Yam is shortchanged with the clichéd role of a troubled veteran police officer, as To’s script does little to elaborate his own traumatic past or attempt to link it to the investigation. Probably the meatiest role here is Cheung’s, which the actor rewards with a searing intensity that also came with months of working out- not that his character is particularly well-drawn, but compared to the rest, at least his comes off the most rounded and realistic.

There's however too little realism in the movie, in particular Wang’s amazing ability at evading an entire team of police officers several times and his just as outstanding powers of infiltrating what is supposed to be a heavily guarded residence after Han’s death. Most perplexing is why Lam would confront Wang on an Ngong Ping cable car no less, other than for the fact that it must have seemed exciting to watch. Every step of the way, Chow’s ham-fisted direction is all too apparent, trying too hard to emphasise the tragedy within the story and in the process draining too much momentum from what is really a standard police procedural.

Its mediocrity would have been fine if it didn’t have both Simon Yam and Nick Cheung as its lead cast, both actors worthy of much less pedestrian material than what ‘Nightfall’ has to offer. Certainly, it is a definite step-up from the appallingly bad ‘Murderer’, but don’t go in expecting the same kind of compelling thriller as ‘Beast Stalker’ or ‘The Stool Pigeon’. And yes we know, this is the second time we’re comparing this movie to the latter two, simply because though it aims to be of the same pedigree, ‘Nightfall’ simply falls short, and what is left is a plodding and generic thriller that barely raises a pulse.

(Despite an A-list lead cast of Nick Cheung and Simon Yam, this procedural thriller wallows too firmly in its own mediocrity and self-seriousness for its own good) 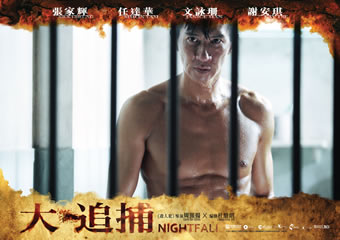 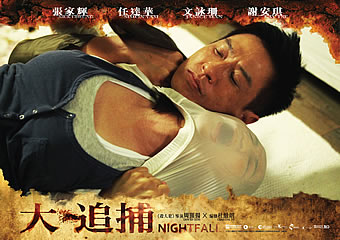 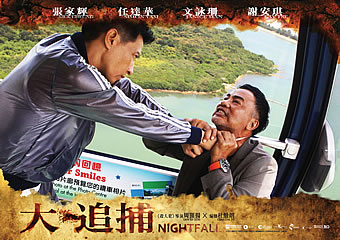 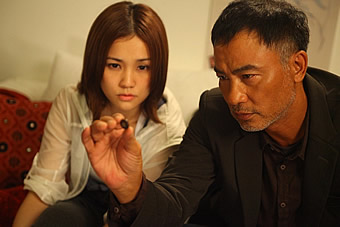 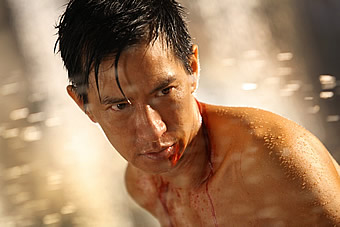 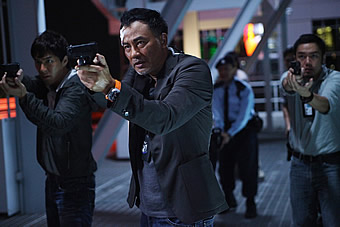