Synopsis: Marvel’s “Iron Man 3” pits brash-but-brilliant industrialist Tony Stark/Iron Man against an enemy whose reach knows no bounds. When Stark finds his personal world destroyed at his enemy's hands, he embarks on a harrowing quest to find those responsible. This journey, at every turn, will test his mettle. With his back against the wall, Stark is left to survive by his own devices, relying on his ingenuity and instincts to protect those closest to him. As he fights his way back, Stark discovers the answer to the question that has secretly haunted him: does the man make the suit or does the suit make the man?

Tony Stark might be at his best with his gadgets, but ironically his movies are best when he is without them. ‘Iron Man 3’ is a perfect demonstration of that – for the first 40 mins, Stark is the same arrogant, cocksure person he was in the self-important ‘Iron Man 2’; and then after crashing and burning in his damaged suit in the middle of a wintry expanse, Stark is forced to start over, and that rebirth brings back what made the first ‘Iron Man’ so infectiously entertaining in the first place.

Indeed, you’ve been warned – don’t expect ‘Iron Man 3’ to be firing from all cylinders right from the get-go as ‘The Avengers’ did; rather, the road to that payoff is slow and bumpy. After an intriguing prologue set on New Year’s Eve back in 1999 that introduces the billionaire Tony Stark’s advances on an attractive scientist Maya (Rebecca Hall) while brushing off the eager and eccentric think-tank head Aldrich Killian (Guy Pearce), we get a reunion with Stark that demonstrates the careful planning Marvel has executed over the past five years with their superhero commodities.

This is a ‘post-Avengers’ Stark, traumatised by his near-death experience closing the Chitauri wormhole back in New York. At the expense of sleep and his relationship with the ever-lovely Pepper Potts (Gwyneth Paltrow), Stark throws himself into work – which to him means further refining his ‘Iron Man’ armour. In the meantime, he leaves the heavy lifting to Colonel Rhodes (Don Cheadle), commissioned by the President to fight terror in the War Machine suit (basically the ‘Iron Man’ fighting machine but in the patriotic colours of red, white and blue).

Up to this point, a lot of what is meant to pass as wisecracks is exchanged as dialogue among Stark, Potts and Hogan, but the smart-talking isn’t particularly amusing or engaging and gets increasingly tiresome after a while. But as we said at the start, it is precisely when Stark is forced to start over that the movie starts getting into the groove. Abandoning the slick and sleek mechanical tricks and gimmicks, the middle act settles into a surprisingly old-school act in a small-town-USA where Stark had meant to visit to investigate a recent incident which he suspects is linked to The Mandarin.

There, some of the sparkiest repartee unfolds between Stark and a young kid he meets, Harley (Ty Simpson), who will not only enable him to overcome his PTSD but also become an unlikely pre-pubescent sidekick. The rapport between Stark and Harley significantly enlivens the film, with the ‘connection’ (there is a special meaning to the quotation here) between them perhaps the most poignant relationship developed here. Thankfully, the delightfully warm and witty midsection only makes the film better from here onwards.

Surpassing expectations of a straightforward good-versus-bad showdown, veteran action movie screenwriter Shane Black and his first-time feature film writer Drew Pearce engineer a couple of elegant twists, including an ingenious revelation on the true identity of The Mandarin. Not to worry, we’re not in spoiler mode here, but suffice to say that it is probably the very reason why Academy Award-winning actor Ben Kingsley was enticed to the role – despite the apparent cliché of how Brit thespians always get offered such outlandish villainous characters. And with that surprise comes the action that you’ve been waiting for from this summer blockbuster.

Black, who is making his sophomore feature film, offers up two eye-popping set pieces. The first sees a daring attack on Air Force One in mid-air, leaving 13 people in free-fall and a truly exhilarating sequence where Iron Man gets to play ‘barrel of monkeys’ with all of them and guide them to safety. The second is the elaborate and game-changing climax – not only for the fact that it is the first and only time in the whole movie that we see the Iron Legion (aka Stark’s army of 42 centrally guided mechanised suits) in action, but also because it comes to a startling conclusion that re-establishes the dynamic between Stark and Potts. Both are even more astounding considering Black’s last and first movie was a crime caper called ‘Kiss Kiss Bang Bang’ that never would have primed you into thinking he was capable of such spectacle.

But one supposes that Robert Downey Jr must have seen that potential in Black to recommend him as the candidate to take over Favreau, the familiarity between actor and director paying off in how the former trusts the latter to take the character in a different direction. While he was vulnerable before, Stark did not have the same attachment as he does here with Potts or the same sense of introspection that is evident in his voiceover. In turn, Downey Jr. gives his best performance as Tony Stark/ Iron Man yet, with a newfound sense of frailty that develops convincingly into humility to match his heroics.

Disagree if you must, but we always loved Stark more when he was less full of himself, and a refreshingly new aspect here is the buddy element that sees Stark pairing first with Harley and then with Col Rhodes. In particular, the finale sees a rousing partnership with the latter – both Downey Jr and Cheadle clearly enjoying trading quips and barbs at each other while saving the day. And given how the ‘Iron Man’ movies have been at their most rousing when Stark rebuilds himself, the last shot of Stark beginning a new phase in his life bodes well for the future of the franchise, especially if it is to continue its life outside of ‘The Avengers’.

If measured against the yardstick of last summer’s Joss Whedon movie, then ‘Iron Man 3’ is surely not on the same level of awesome. But, a tedious start aside, it eventually succeeds to capture the wit and charm of the first film while surpassing it with some nifty twists you’re unlikely to see coming. Stay around too for the bonus after the end credits – that sequence with Tony Stark and Bruce Banner (Mark Ruffalo) is sure to leave a big smile on your face.

(A welcome return to form for the ‘Iron Man’ franchise, this trilogy capper overcomes a weak start to impress with unexpected buddy chemistry, surprising plot twists and most of all, exhilarating action) 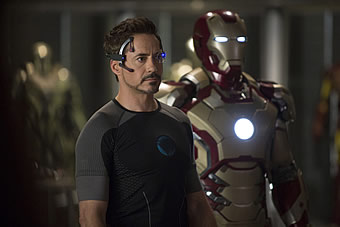 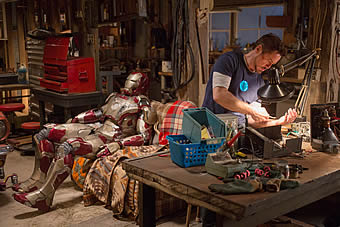 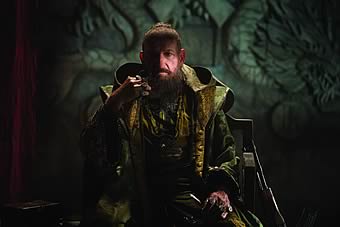 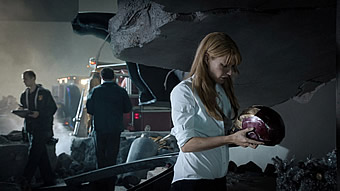 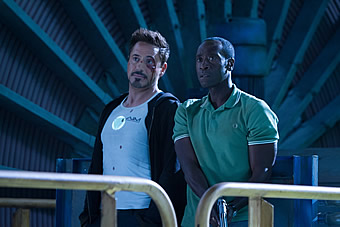 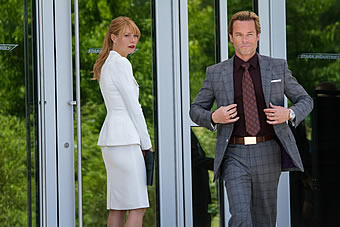