Synopsis: In the closing days of the 19th century, the Prince Regent of the crumbling Qing Dynasty orders the mass execution of the entire Meng clan. Before his beheading in a crowded Beijing marketplace, the Meng clan leader vows that his family will avenge this travesty of justice. Awaiting his death, a five-year-old Meng boy named Erkui bravely sings an aria. The power and purity of his voice touches the onlookers including opera star Master Yu Shengying and his seven-year-old pupil Guan Yilong. Deeply moved, Master Yu rescues the boy and the two orphans, Yilong and Erkui, become brothers. Years later, Master Yu wins the coveted golden "Wu Sheng Tai Dou" (“The Mightiest Warrior”) plaque from the Prince Regent, but subsequently loses it in a duel with his archrival Master Yue Jiangtian. Banished from the stage upon his loss, Master Yu spends his time training Yilong and Erkui in Peking Opera and martial arts, perfecting their skills. When the boys grow into men, they set off for Shanghai to pursue revenge and reclaim the plaque from Master Yue. Once they reach Shanghai, they quickly defeat Master Yue, reclaiming not only the plaque but also becoming the new masters of Yue’s opera troupe. Almost overnight, they become sensations of the Shanghai opera scene along with Master Yue’s protégé and former lover, the beautiful actress Xi Mulan. But soon, their collective pasts catch up with them and all three ends up in a complex web of love, lust, deceit and betrayal, ultimately ending in tragedy.

Director and co-writer Gao Xiaosong’s ‘My Kingdom’ is meant to be a lavish period action drama set around the Peking opera, and for the first half of the movie, it accomplishes just what it promises. Unfortunately, there’s another half to the film, and it is this that you’re likely to remember once you step out of the cinema. No thanks to Gao and co-writer Zou Jingshi’s overplotting and Gao’s clumsy direction, this other half is a complete utter mess and a testament to how something so beautiful can fall apart so dramatically.

Beginning with an extended prologue which introduces the audience to two rival operatic masters- Yu (Yuen Biao) and Yue (Yu Rongguang), the movie charts the ups and downs of two students of Master Yu- Yi-Long and Er-Kui, as played by Wu Chun and Han Geng respectively. After Yue’s unannounced contest for the title of ‘The Mightiest Warrior’ leads to Yu’s humiliating defeat and his subsequent retirement, Yi-long and Er-kui make it their mission to avenge their master following the completion of their training.

So they travel to Shanghai to challenge Master Yue at his very theatre, and proceed to engage with Yue and the rest of his troupe in a thrilling duel that is the undisputed highlight of the entire movie. Indeed, this exhilarating sequence combines the dexterity of Sammo Hung’s action choreography with Gino Xie’s lush costumes and Yang Yaoyu’s beautiful production design to deliver a truly awesome acrobatic display, complemented by Kwong Ting Wo and Lam Wah Chuen’s deft cinematography and some nifty editing by Christopher Blunden. Each of the crew here deserves mention for this sequence alone, and it is pure magic to see their individual touches unite to form a magnificent tapestry.

Nonetheless, this sequence also proves to be one of the reasons for the film’s undoing later on, for it sets its audience up for something lofty which the rest of the movie fails to deliver. Yes, after allowing Yi-long and Er-kui to fulfil their quest of regaining their master’s honour halfway into the film, it isn’t sure what else to let these characters do. So Gao and Zou turn Yi-long into an arrogant philanderer and Er-kui into an assassin going after the Prince Regent’s sons (the Prince was responsible for the death of his family and their village when he was young) while falling in love with Xi Mulan (Barbie Hsu), Yue’s protégé cum lover.

As if that wasn’t enough, they also bring in a powerful Mayor figure (played by popular magician Liu Qian) whose allegiances are never quite clear. It takes skill to juggle all these disparate characters and plot threads together and yet be able to make sense of it all at the end, but neither Gao nor Zou have that ability. Instead, we kid you not when we say it all becomes a shocking mess, as Gao jumps from one scene to another without proper continuity, and the characters (especially Mulan) are defined so poorly at the end it simply becomes laughable.

Even worse is Gao’s propensity for melodrama, straining for some grand irony in what he hopes is a complex ‘web of love, lust, deceit and betrayal’. Unfortunately, there is little gravity in the proceedings, and one is left baffled at his ignorance at how spectacularly his film crumbles apart. His actors aren’t as daft, but their compensation in the form of over-acting only makes it more pathetic. Granted that Wu Chun and Han Geng were probably chosen more for their looks than for their acting, but the good work that both put in is sadly wasted by the time the film gets past the halfway mark.

Those looking to see more of Sammo Hung’s action work will also be disappointed- after the breathtaking showcase described early on, there is only one more action sequence to come, and that set in a wine cellar between Er-Kui and Mulan is nothing to shout about. Those looking to learn more about the fading cultural art form that is Peking opera will also likely be let down- Gao and Zou get so caught up in trying to spin their web of intrigue that they forget to spend any more time on the very reason people are drawn to their movie, and the second half is surprisingly devoid of operatic scenes.

By the time the curtains draw to a close, what began so promisingly will probably have faded into oblivion, and in its place a feeling of incredulity at the dreadful plotting and incompetent direction on such prominent display. If you’re a fan of Peking opera, or curious to see what the best of it looks like, we recommend you leave right after Yi-long and Er-kui defeat Master Yue- there’s nothing after that worth your time.

(A film of two disparate halves- one very excellent first, and one terribly dreadful second) 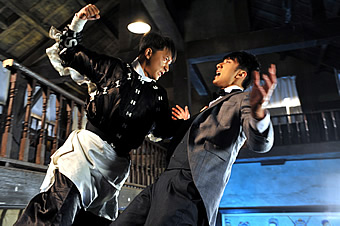 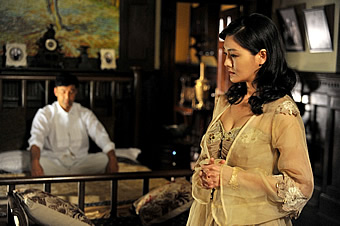 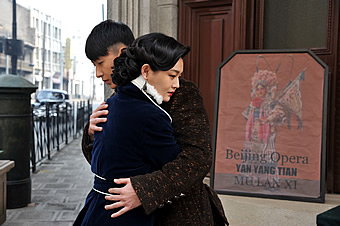