Synopsis: "The Kids Are All Right" is the heartfelt new comedy from acclaimed director Lisa Cholodenko, starring Annette Bening, Julianne Moore, and Mark Ruffalo. Two teenaged children ("Alice in Wonderland's" Mia Wasikowska and "Journey to the Center of the Earth's" Josh Hutcherson) get the notion to seek out their biological father and introduce him into the family life that their two mothers (Bening and Moore) have built for them. Once the donor (Ruffalo) is found, the household will never be the same, as family ties are defined, re—defined, and re—re—defined.

The Kids Are All Right may contain the obvious homosexuality theme, but it is essentially a movie that eagerly attempts to break stereotypes. Right off the bat, the title alone already strikes off one of the notions that people like the California’s prop 8 supporters, might probably have towards the family life of same-sex couples.

The kids in question are Joni, played by Mia Wasikowski (the girl from Alice in Wonderland), and Laser (yes that’s Laser as in light) – two teenaged half-siblings living comfortable upper middle class lives with their two mothers whom they address in the collective, as ‘moms’. The boy skates and the girl is a straight-A student because well, the movie wants you to know that even though they have gay parents they are still well adjusted. One mom is a doctor and the other is about to start a landscaping business – both loving and caring towards each other and the kids. They have home dinners, family tv sessions and things are as normal as can be for the family unit, until one day, Laser convinces his elder college-going sister to contact their birth father i.e. their moms’ sperm donor.

She drags her feet doing it, but eventually forms a close bond with Mark Ruffalo’s easily likable character of Paul – a middle-aged hippie sans peace sign necklace and bell-bottoms, who dropped out of college, zips around on a motorcycle and owns a restaurant that strictly serves locally grown produce. His character is laid-back, free-spirited, and easily connects with people.

Awkwardness and flattalk on personal histories peppers the first meeting between the father and the kids, and also most of the conversations between most of the characters actually. But, this is a good thing, as the movie does not care to strive towards the usual comedy movie banter a la an episode of Friends thus preserving realism as it addresses life’s grey areas. This however, makes its comedy genre kind of misplaced.

After surviving first meetings with the kids and then followed by the moms, Paul’s demeanor wins the hearts of everyone except Nic the control freak as played by Annette Benning, who stands as the antithesis to the biological father. She begins to see him as an interloper as he starts to hang out with the kids naturally like a cool dad does. Oh, and he also goes into amutually initiated affair with yes, one of his sperm recipients, Julianne Moore’s Jules. Now, that’s another stereotype broken there, because the movie wants you to know that human desire is complex and irrational. Another example would be, Nic and Jules’ intimate sessions done to gay male pornography. Yup.

With so many stereotypes to challenge through explicit means, the movie loses its focus and at the same time, its justification for getting that best picture Oscar nomination. The pop psychology notes on human sexuality and insights on the negotiable meanings of family, marriage and relationships are interesting, but they are not backed up by proper characterization. For a start, Laser’s motivation to connect with his biological father should have been fleshed out more rather than transforming him into an apathetic teenager who could only go ‘meh’ at the whole thing. Instead, the issue is completely ignored in favour of the less interesting subplots of Joni’s last summer before college and the adults’ mid-life crisis. Paul’s character too, is not given a dignified exit worthy of the most likable character in the movie leaving the ending to not be all right.

(The movie is just all right) 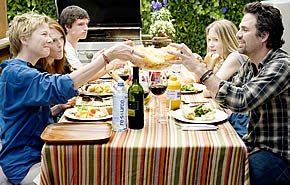 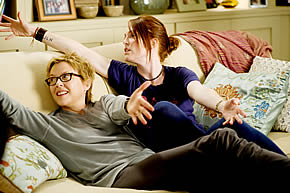 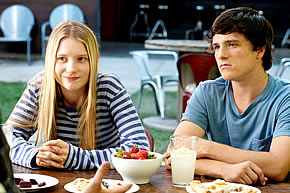