Synopsis: An ex-con tries to make a fresh start in a relationship with a reclusive actress in London Boulevard , the directorial debut of William Monahan, the Oscar (r) -winning screenwriter of The Departed . A sexy, stylish gangster thriller bristling with wit and brutal intrigue, London Boulevard stars Colin Farrell and Keira Knightley as star-crossed lovers who run afoul of one of London 's most vicious crime bosses.

After three years behind bars, Mitchel (Colin Farrell) emerges from Pentonville Prison with good intentions. But when his old friend Billy (Ben Chaplin), a low-level gangster who's looking for backup on a job, meets him upon release, Mitchel joins him in exchange for a place to live. While entangled in his past, Mitchel becomes involved in the life of Charlotte (Keira Knightley), a movie star holed up in a Holland Park mansion against a horde of reporters and photographers. Touched by her beauty and vulnerability, he quickly falls into the role of her protector, fending off aggressive paparazzi, stalkers and other villains, as well as Billy's ploy to rob the house of its expensive art and vintage cars.

As the attraction between them grows and their relationship deepens, Mitchel and Charlotte make plans to start anew in Los Angeles. But Mitchel has already caught the eye of powerful and ruthless mob boss Gant (Ray Winstone), who sees him as a potentially valuable asset to his business. When Mitchel rebuffs a lucrative job offer, Gant sets out to ensnare him in a violent web of extortion and murder . As Gant's tactics become increasingly vicious and deadly, it becomes clear he would rather see the younger man dead than free. Knowing no one close to him is safe from Gant's wrath, including Charlotte and his troubled sister Briony (Anna Friel), Mitchel decides to take a drastic move to settle things between them once and for all.

William Monahan won an Oscar for his adapted screenplay of "The Departed" and now tries his hand at directing with the star-studded "London Boulevard", a crime film based on a novel by Ken Bruen that twirls in a star-crossed love story and against-the-odds revenge. The question here becomes; did Monahan actually show up to direct this convoluted and romanticised version of the British Gangster Film? The film does not actually adhere to anything except cliches and audacious leaps of faith, with no impetus to find a distinct element in its proceedings. Monahan naturally spins a good line but his eye for performance and cohesion fails him more often than not.

Colin Farrell stars as Mitchel, the hard-luck gangster who has just been released from the clink and finds himself being drawn back into the fold of villainy by a perfidious underworld don (who else? Ray Winstone) just as he meets Charlotte (Keira Knightley), a famous but borderline agoraphobic young actress who hires him as a handyman/bodyguard. They fall in love and Mitchel reaches a crossroads -- to protect his freedom, he has to risk it all.

The prime factor of the film that spurs every other action in the film is the romance between Mitchel and Charlotte so it only goes to reason that the prevailing fault of "London Boulevard" is the unbelievable and badly charted relationship between the reformed gangster and the troubled actress. Perhaps it's something as intangible as chemistry or perhaps its that Charlotte does not get a fair share of screen time to develop and endear herself. The romance in the film feeds right into its violence and the nature of survival -- love becomes the emblem for freedom, so to botch up this element is to drive a wedge between the honest truth of the film.

As a London crimer, the film understands the seedy and grimy facade of the world and calibrates its violence accordingly. There is a sense that Monahan feels more attuned to this world than he does with Mitchel's tepid love life. Even so, its bleak perspectives and lack of motivation to mine the potential black comedy lurking within its premise of celebritydom being similar to the ravenous crime underworld create an unerringly dour endeavour.

Monahan works from templates of the genre with nothing new to create a film with a personality of its own -- the titular inspiration to "Sunset Boulevard" becomes laughable. Shades of "Notting Hill" to "Layer Cake" colour the film's uneven handling of melodrama and violence. His ear for dialogue remains the best part of the film but even that's all fluff when the story and development of the characters feel like a tangled mess of scenes that never does come together.

(Despite some good dialogue, "London Boulevard" strings together an undercooked story and badly realised cliches) 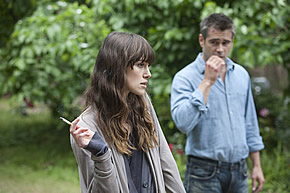 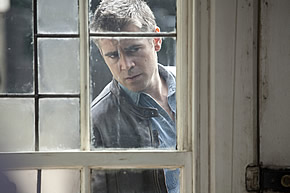 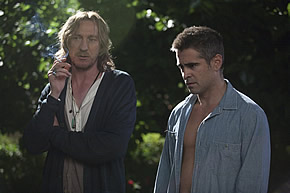 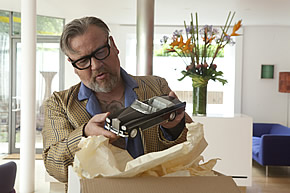 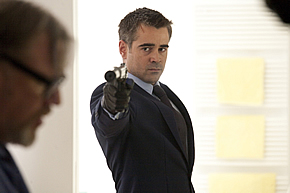