Synopsis: Middle class housewife Ila is trying once again to add some spice to her marriage, this time through her cooking. She desperately hopes that this new recipe will finally arouse some kind of reaction from her neglectful husband. She prepares a special lunchbox to be delivered to him at work, but, unbeknownst to her, it is mistakenly delivered to another office worker, Saajan, a lonely man on the verge of retirement. Curious about the lack of reaction from her husband, Ila puts a little note in the following day’s lunchbox, in the hopes of getting to the bottom of the mystery. This begins a series of lunchbox notes between Saajan and Ila, and the mere comfort of communicating with a stranger anonymously soon evolves into an unexpected friendship. Gradually, their notes become little confessions about their loneliness, memories, regrets, fears, and even small joys. They each discover a new sense of self and find an anchor to hold on to in the big city of Mumbai that so often crushes hopes and dreams. Still strangers physically, Ila and Saajan become lost in a virtual relationship that could jeopardize both their realities.

It seems befitting that the basis of the dispirited widower Saajan Fernandes (Irrfan Khan) and the unhappy housewife Ila (Nimrat Kaur) should be over food. Indeed, the need for human connection is as fundamental as the need for sustenance, and in first-time director Ritesh Batra’s warm, poignant and reaffirming feature film, it is in satisfying one that our characters find in each other the companion they both need in their lives.

Not many in Singapore may be familiar with the concept of dabbawallas, but in Mumbai, these individuals are part of an elaborate food delivery system that brings home-cooked meals to thousands of office workers in the city. Ila is one such domesticated wife, who pours her heart and soul into making each meal in order to win back the affection of her since distant neglectful husband. Unknown to her, there’s a cog out of place in the system, and her carefully prepared lunchbox is instead going to a billing agent named Saajan who is preparing for retirement.

At least at the start, Ila doesn’t realise the mistake, and finds the handwritten messages that return with the empty lunch boxes comfort food for her broken soul. It’s no wonder then that even when she discovers the mixup, she continues to send the lunches and the notes to this stranger who licks clean her containers. “I don’t know when I became old,” Saajan ponders in a note; in turn, Ila, watching her marriage fade away, responds “What do we live for?” Pretty soon, a platonic but empowering connection develops between them, goading them to rethink the paths of their lives.

Against the hustle and bustle of Mumbai, Bitra succeeds in painting a portrait of loneliness between two authentically portrayed characters who yearn for someone to share their worries, frustrations and anxieties. These are essentially two lonely people reaching out to each other, baring their souls safely to a stranger at the other end on bits of paper. To Bitra’s credit, he eschews the mawkish and sentimental for sensitive and naturalistic character beats, and there is a beautiful understatement in the way he allows both Saajan and Ila to find their respective bearings in life.

Less delightful though are the supporting characters, in particular Saajan’s trainee (Nawazuddin Siddiqui) and Ila’s domineering mother (Lillete Dubey), both of whom are clearly intended as comic foils to our lead characters but end up awkward additions that could simply have been excluded. Thankfully, they don’t quite detract from the light but bittersweet tone of the movie, which moves at a gentle unhurried pace to allow its audience to savour the many keen observations it makes about coincidence and connection.

In Khan and Kaur, Bitra has found two perfect and perfectly matched actors to play their respective parts. Best known for playing the adult Pi Patel in Ang Lee’s ‘Life of Pi’, Khan delivers a quietly masterful performance that begins glum and grumpy and reveals both wit and tenderness later on, evolving just as the tenure of his notes do. On the other hand, Kaur effortlessly slips under the skin of a wife and mother who gradually realises that she is falling in love with a total stranger.

Even though it may not offer big cathartic moments, ‘The Lunchbox’ is one packed with morsels of heartwarming goodness, reminding its audience of the connections between people that make a difference in our lives and the transformative power that such connections have as well. It is an impressive debut for Bitra, with a pleasantly ambiguous ending that holds out hope for Saajan and leaves his audience feeling equally sanguine. And indeed, the need for connection is as powerful as the need for food, a sustenance if you would have it that is perhaps all it takes to make us feel renewed and confident about the circumstances of our lives.

(Warm, gentle and reaffirming, this delicious combination of food and love tugs at the most fundamental human need for connection) 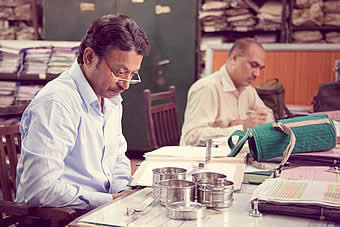 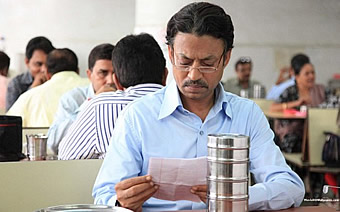