Synopsis: Spring (Teresa Mo) and her daughter, Autumn (Karena Ng), work in a multinational enterprise of Men’s underwear run by Hugo (Raymond Wong). To win the affections of his ex-girlfriend, Miao (Hai Qing), a world class fashion designer, Hugo pretends that his business is on the brink of bankruptcy and recruits her. Miao seizes the opportunity to take revenge on Hugo and demands that he establishes a new fashion line to achieve positive results before she accepts the job offer. Hugo employs top model Jojo (Lynn Xiong) who is competition for Spring, as it is yet to be determined who will take charge of this new line. Autumn runs into part time actor, Fei (Ronald Cheng), who offers his job experience as an inspiration to Spring. Fei brings his friend, Owen (Raymond Lam), an ex-top model to help as well. Unknown to all, Owen and Jojo used to date but broke up because of a misunderstanding.

Riffing on the old Chinese saying that (by a literal translation) regards men as brothers and women as laundry, this latest fluffy rom-com tries to be smart by taking on the gender stereotype and turning it on its head. In fact, it’s even gone so far as to proclaim itself as ‘the most entertaining comedy of the year for women’, but let’s just say that we can’t quite imagine how any person – male or female – would find the humour in Vincent Kok’s latest film any bit amusing.

A total of three writers -  E.W.Y. Tang, Anselm Chan and Kok himself – are credited for the movie, but the way we see it, they must have gotten some mental block all at the same time. How else would you explain why none of them realised that this would turn out as unfunny as it is? And really, we’re not just talking unfunny – we’re talking boring, dreary, and downright lazy writing that qualifies this as one of the most listless and uninspired films we’ve seen this year.

Fashioned as a workplace comedy not unlike the Chan Hing-Ka pair of comedies ‘La Brassiere’ (2001) and ‘Mighty Baby’ (2002), it pits the down-to-earth mother-daughter team of Yu (Teresa Mo) and Karena (Karena Ng) against the high-powered single female Jojo (Lynn Xiong) to design a line of women’s-wear that would fit the titular theme. The genesis for it? The owner of the company, Hugo (Raymond Wong), has to make it right with a former romantic flame, Muse (Hai Qing), whom he is courting for both personal and professional reasons, after shooting off the chauvinistic remark a few years ago.

Even if we can get past the awkward premise, there is too little that proves redeeming. The central rivalry at the heart of the story is portrayed too stiltedly and genially to reflect the kind of competition that takes place at today’s workplace; and the comedic scenarios – involving a temporary actor named Fai (Ronald Cheng) whom Karena meets one night at a bar and Fai’s cousin Lucky Owen (Raymond Lam) who is supposedly popular, well-connected and highly sought-after – are surprisingly dull and humourless. When only one, where Fai conspires with Yu to steal Owen’s contacts off his phone while he is in a sauna, raises a chuckle, you know the filmmakers are seriously scraping the bottom of the barrel.

As with such slick packages, there needs to be some romance and melodrama thrown in. So in addition to Hugo’s bid to win back Muse, Owen and Jojo try to rekindle an old spark and Fai and Karena fall in love with each other. None are handled with any deftness, and their inclusion seems merely so the writers can take them off a checklist. There’s also an even odder melodramatic arc thrown in for good measure towards the end when Yu suddenly objects to Fai and Karena’s relationship due to the former’s employment status.

It’s no wonder then with so many elements haphazardly thrown together that the pacing is just lethargic. Though not the most outstanding director around, Kok has shown himself at least competent enough to direct an entertaining rom-com (think ‘Super Model’ (2004) or ‘Mr and Mrs Incredible’ (2011)), but ‘Love Is… Pyjamas’ sees Kok at his professional worst, joining the ranks of his duds like ‘Marry A Rich Man’ (2002) and ‘My Lucky Star’ (2003).

So interminable it is that even his frequent collaborator Ronald Cheng can’t even save the show. If the novelty of seeing Ronald with a black face to play a Beyonce-lookalike doesn’t seem at all exciting, then nothing else about his role here will interest you. Lam is essentially a sideshow that could have been written out of the movie, and Karena Ng is just too bland to make an impression. The one saving grace is veteran actress Teresa Mo, who ‘Zumbas’ impressively just to give the movie some semblance of a life.

The only reason we can think of that cast and crew would sign up for this movie is the chance to get a free tour of Hangzhou, where some of the co-production money came from and thus where the movie heads to in its last third. It’s easy to blame this tedium on the sanitisation required of Mainland- Hong Kong co-productions to pass the censors of the former, but really this is a classic case of filmmakers getting too complacent for their own good, thinking that a catchy premise and some recognisable casting can make up for unimaginative writing and bad execution. Indeed, there is male-oriented humour and there is female-oriented humour, but something like ‘Love Is…Pyjamas’ is just gender-blind bad humour.

(About one of the most unfunny comedies we’ve seen this year, this uninspired tedium will put you to sleep) 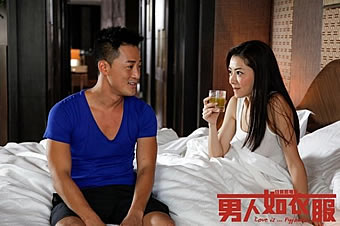 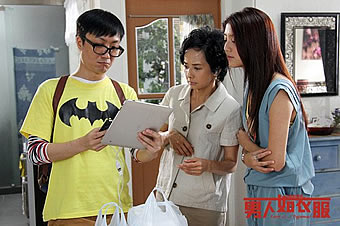 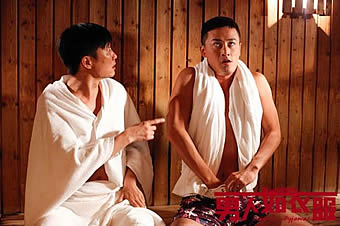