Britt Reid (Seth Rogen), son and heir to Los Angeles' largest newspaper fortune, is a rich, spoiled playboy who has been happy to maintain a direction-less existence. When his father James Reid (Tom Wilkinson) dies, Britt meets an impressive and resourceful company employee, Kato (Jay Chou). They realize that they have the resources to do something worthwhile with their lives and finally step out of James Reid's shadow. Kato builds the ultimate weapon, The Black Beauty, an indestructible car with every weapon imaginable and Britt decides that in order to be heroes, they will pose as villains. With the help of Britt's new secretary, Lenore Case (Cameron Diaz), they learn that the chief criminal in the city is named Benjamin Chudnofsky (Christoph Waltz). He has united all the gangs under his power, and he quickly sees that the Green Hornet is a direct threat to the prosperous criminal underworld he controls.

The modern-day titular superhero (as played by Seth Rogen) is the playboy son of ‘The Daily Sentinel’ newspaper magnate James Reid, a fearless crusader of justice killed by what appears to be a fatal bee sting. Unlike his dad, Britt is a slacker man-child not unlike the Rogen persona one has come to recognise from his previous comedies “Knocked Up” and “Superbad”- in other words, underachieving, immature and maybe even obnoxious. Indeed, this isn’t your typical superhero movie- though technically, the Hornet’s not a superhero at all.

Born in the 1930 as a radio serial developed by Lone Ranger creator George W. Trendle and revived in several incarnations including the short-lived ‘60s television series with Bruce Lee as Hornet’s Asian sidekick Kato, the Green Hornet was a masked vigilante whom, like Batman, fought crime from behind a mask armed with nifty inventions courtesy of Kato. Still, Rogen playing the debonair hero was always going to be a stretch, so it’s a good thing that Rogen- together with his frequent collaborator Evan Goldberg- were also given the creative reins to the movie.

While this reboot could have easily followed in the footsteps of the dark pathos that was Christopher Nolan’s Batman (you’ve got to admit, the similarities between the two playboy billionaire sons turned caped crime fighter tales are uncanny), Rogen and Goldberg have steered clear of those tendencies in favour of a fresh, funny and often irreverent take. What else should we expect of a hero who decides his first mission out with his newfound gadgets would be to drill the head off a statue erected in memoriam of his father? Or rely on his newly hired hot temp staff Lenore’s (Cameron Diaz) criminology expertise to decide where to find the next criminal hotspot?

These inspired comic moments come just as fast and furious as Rogen’s wisecracking, delivered yet again with Rogen’s signature casual vibe that you’ll either love or hate (if it isn’t obvious yet, we belong to the former camp). Rogen’s gibes are directed most often at his nimble and beyond-cool partner Kato, either poking fun at the latter’s halting delivery (when Kato says he “grew up penniless”, Rogen’s Britt interprets this to mean he “grew up penis-less”) or praising his technical wizardry (“You’re like a human Swiss army knife,” Britt tells Kato).

In the Apatow era of buddy comedies (of which Rogen was instrumental in ushering in), the Hornet-Kato relationship is no longer owner-manservant, but redefined as a ‘bro-mance’- which explains the multiple “I’m your man”-type verbal gags. Of course, the fact that Rogen and Asia’s own singer/musician/actor Jay Chou share genuinely affable chemistry helps their cause, and their exchanges have a pleasantly enjoyable back-and-forth rhythm characteristic of the best of such comedies.

Besides recasting the typical superhero characters, Rogen and Goldberg have done similar for the regular villain du jour, the Russian drug lord Chudnofsky. Here the big bad guy is one with self-esteem issues, introduced brilliantly in one of the opening scenes through an uproarious exchange with a young rival gangster (James Franco in an uncredited cameo) who calls him a “disco Santa”. Fresh off his Oscar-winning turn in Tarantino’s “Inglourious Bastards”, Christoph Waltz gleefully hams it up as the gangster whose unpronounceable name and bad dress sense becomes some of the film’s best running jokes.

That unorthodoxy continues in the form of Frenchman director Michel Gondry, best known for eclectic arthouse darlings “Eternal Sunshine of the Spotless Mind” and “Be Kind Rewind”. Gondry isn’t the obvious choice for a big-budget franchise like this, but the artisan’s keen visual flair remains intact. He is responsible for the film’s iconic Kato-Vision, that lets its audience appreciate things through Kato’s ever-vigilant eyes. He is also behind many of the film’s inventive action sequences, showing Kato moving in superspeed fighting off the bad guys in slo-mo. Rogen may deliver the humour for this film’s comedy, but Gondry puts the cool into its action, and the resultant action-comedy combination is a blast.

Certainly, having a cool car can’t hurt, and the Hornet’s sweet ride- a ’65 Chrysler Imperial- retrofitted with big guns and missiles puts the muscle into the action. This bit of retro is not alone- there’s also the turntable behind the Chrysler’s front seats and the old-school newspaper offices of the Reid’s newspaper empire- and are unmistakably Gondry’s touches, his affection for all-things old-school evident here as was in his earlier “Be Kind Rewind”. But Gondry proves just as adept with the 3D technology- a particularly inspired use the split-screen photography with different screens on different planes.

This is the result of a film that took more than a decade to make its way to the big screen, its legacy consisting of names such as George Clooney, Mark Wahlberg, Jake Gyllenhaal to filmmaker Kevin Smith and Asia’s very own Stephen Chow. Purists of the original “Green Hornet” may not be pleased with the liberties that Rogen and Goldberg have taken with the original material, but you’ll have to keep an open mind to enjoy this lively rip-roaring action-comedy masquerading as a superhero movie. On a final note, this reviewer and ardent-Jay Chou fan would like to congratulate the star for a brilliant Hollywood breakout turn- Chou is pure understated cool as Kato, and an absolute scene-stealer alongside Rogen.

(Put aside your preconceived notions of what a superhero movie should be and enjoy this fresh, funny, irreverent action-comedy that’s an uproariously entertaining ride through and through) 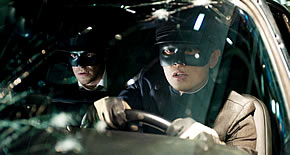 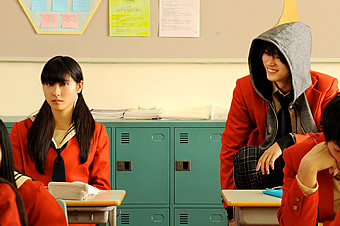 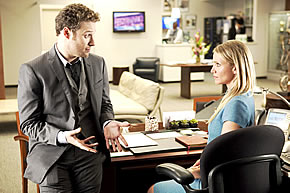