Synopsis: They were known simply as “The Lost Boys.” Orphaned by the brutal Civil war in Sudan that began in 1983, these young victims traveled as many as a thousand miles on foot in search of safety. Fifteen years later, a humanitarian effort would bring 3600 lost boys and girls to America. In “The Good Lie,” Philippe Falardeau, (writer and director of the Oscar®- nominated Foreign Language film “Monsieur Lazhar”) brings the story of their survival and triumph to life. Academy Award® winner Reese Witherspoon (“Walk the Line”) stars alongside Sudanese actors Arnold Oceng, Ger Duany, Emmanuel Jal, and newcomer Nyakuoth Weil, many of whom were also children of war.

Do we really want to watch another film “inspired by real life events”? Are we ready to take on another feel good movie starring a well known Hollywoodactor helping folks from less developed countries? Is there a market for yet another sappy tale of the admirable human spirit?

Of course we are. And that’s why we have this predictable but likeable movie about how young victims from the Sudancivil war find safety in America. To top it off, the producers engaged American actress Reese Witherspoon (Oscar Best Actress for Walk the Line) to play the protagonist, and French Canadian filmmaker Phiippe Falardeau (writer and director of Oscar nominee for Best Foreign Language Film Monsieur Lazhar) to helm the 110 minute production. Ron Howard and Brian Grazer are credited as producers here. Oscar bait? You bet.

Witherspoon takes on the role of a brash American woman who helps four young Sudanese refugees after they win a lottery for relocation to the United States. Our gungho female lead works in an employment agency, and why is she only the one helping the boys adjust to American society? Because the filmmakers want us to look up to this noble humanitarian act, that’s why.

This works in both a good and bad way for the movie – good because there’s no way you will dislike the well intentioned production (no one wants to be labeled a heartless Scrooge, right?), and bad because you know how the plot will play out even before buying a ticket.

What’s really commendable are the fine performances from the teen and adult Africans who are actual former Sudanese refugees. The child actors are offspring of resettled Sudanese-Americans, and the inexperienced cast manages to engage with their earnest acting. The best portion of the movie is actually the first half hour, where we are far away from Witherspoon and any other hints of America’s helping hand. The story is captivating here as we follow a group of Sudanese children as they escape their civil war across a sun baked savanna.

In America, we see the four Sudanese refugees adapting to American life. It’s nothing new really (expect to see Americanised brands like McDonald’s and Cheerios popping up), and if anything, these antics are played for laughs. While this dislocation is roughly where things break down a little in a predictable manner, Arnold Oceng, Ger Duany, Emmanuel Jai and Kuoth Wiel do their bit to make this part of the movie watchable. It's hard not to truly feel for these guys and all they've been through and are currently dealing with.

For anyone who is even slightly discerning or has seen this kind of movie before, it's difficult not to be cynical. Witherspoon’s character is a supporting one here, but no thanks to the need to market the movie, her name and pretty face is featured prominently in promotional materials. Her character’s sassy, single, and has affairs with dudes in hotels - but she is also a humanitarian we should aspire to be. The takeaway? We are all flawed humans, yet there’s something in us that makes us saints. 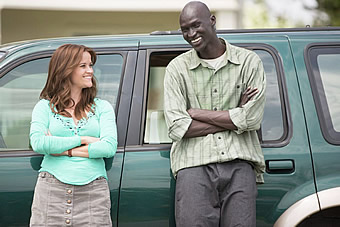