Synopsis: “Let’s make a pact: when we’re 30, if we’re still single, then we’ll get married!” Mabel, Liam and Aaron were born in the same small town, deep in the far south of Taiwan. In this final, hotbed year, new feelings arise that will alter the childhood bonds between them forever: Aaron loves Mabel, but Mabel only has eyes for Liam, who is really in love with Aaron. While Liam remains impervious to all Mabel's displays of affection, Aaron steps up his pursuit until, eventually, Mabel gives in to his attentions. Move on to the 1980s where the Taiwanese people are locked in a social revolution to have the Martial Law lifted. Mabel, Liam, and Aaron throw themselves into taking part. Later, as students in Taipei, they fight even harder for their ideals such as joining the Wild Lily Movement. In the course of this, long held secrets are revealed. Coming almost full-circle, the old friends who are there for one another through times of emotional hardship and extreme tragedy come to realize the true value of their lifelong friendship.

In more ways than one, Gf*Bf is similar to last year’s Taiwanese hit You Are the Apple of My Eye. Both movies start their characters in high school melodrama and trace the development of their friendships / relationships over adulthood. The difference? Apple’s dramatic hymn to the age-old ‘You may not always end up with the one you love most’ dilemma remains the better of the two, recounting the ups and downs of love in ways Gf*Bf doesn’t. That’s despite the fact that Gf*Bf is cast in a more serious tone, telling a love story set against the backdrop of a 1985 Taiwan still in political upheaval. The result is a largely novel blend of romance and politics that, unfortunately, doesn’t work as well as it should. Actually, nothing here works.

The set-up is simple: Aaron loves Mabel, but Mabel loves Liam, but Liam loves Aaron. In case you’re losing track of who’s who, Mabel is female and Aaron and Liam are male. That means Mabel can only love Aaron even though Liam’s the one she truly loves, and Liam can only love Aaron in secret because he doesn’t want others to know that he’s a gay. Eager to spend their youth on something other than sitting around to ponder how to make the love triangle work, our overzealous lovers throw themselves into social movements where they join thousands of others in protests against the Martial Law. As early adulthood beckons, they become more active in their roles, partaking in demonstrations that call for democratic reforms. And then Liam finally reveals that he’s gay.

You can be sure that I didn’t deliberately write that previous sentence to throw the paragraph into disarray because that’s exactly how Gf*Bf works: it never gives any reason why any of the stuff that’s happening needs to happen. I’ll admit that I’m willing to take the idea of a romance movie wanting to make a political statement at face value and its resulting message seriously because that sort of thing doesn’t get tossed around the planning board often and I want to believe that there’s a movie out there that can successfully portray a politics-driven love story. Which is why I’m disappointed with how Gf*Bf turns out. From the start, the motivation for being political activists is ill-defined: Sure, the rebellious nature of young adults means they tend to oppose anything, but the movie seems more interested in doling out fanciful poems during protests than explaining why these students want to get involved in politics or what they hope to achieve with their demonstrations.

Likewise, the protests themselves are unrealistically staged. If you’re going to make a movie that’s partly about political protests, the least you could do was depict the risks associated with it. Threats of expulsion (when the characters are high school students) and arrest (when the characters are adults) loom over the protestors the entire time, but even the one time when Liam comes face to face with a cop and is set to be arrested, the movie progresses into a scene where Liam kisses the cop for several minutes. In a society where protests will lead into all manners of rough treatment from the riot police, turning it into a light-hearted and consequence-free activity seems irresponsible. In not trying to do more with what it wants to say with its political parts, the movie becomes something of a cute dressing: refreshing and bold enough to broach the topic, but not nearly as capable enough to close it off.

This brings us to the question of why anyone would ever want to have politics in a love story if it’s not going to break any new ground in the genre. Here is a movie that becomes increasingly suspicious as you analyse it. It’s teeming with all sorts of ideas that don’t necessarily add any value to the love story, including some homosexual dudes and their wedding that the movie snatches out of thin air midway through. On offer too is a half-hearted sub-plot involving Aaron and some other random woman whose name is never alluded to and whose screen time is limited to less than three minutes, and not forgetting yet another weak sub-plot involving Liam and another random dude that appears much later in the movie. It’s as if Gf*Bf is too afraid to explore more of the core love triangle. The positive effect? It’s better this way.

Watching Mabel, Aaron and Liam interact with each other on-screen is such a painfully terrible experience that I’d rather not have it. Again, the movie doesn’t provide any reason why these three friends actually like each other. The couple in You Are the Apple of My Eye fall in love because the girl is willing to dedicate her time to help the guy improve his schoolwork even though his teachers have already given up on him and he’s touched by her actions. Here? They just like each other. Even if there might be some reason that leads our three friends here to like each other, the movie doesn’t show. Mabel, Aaron and Liam stare at each other for long periods and when they do speak to each other, their conversation is functional above all else. There’s no reminiscing of past experiences, no small talk, no banter: the chemistry is so atrociously awful they might as well be a bunch of robots programmed to stick together.

That’s the largest problem with Gf*Bf. Everything feels half-baked and pretend, and nothing feels satisfying or fulfilling. Every idea here is an elaborate cover-up for the ridiculously bad chemistry between our main characters. Granted, there’re many ideas to contend with: politics, homosexuality and affairs, but since you’re going to watch Gf*Bf for the love story (the title is already an advertisement for the love story), the poorly-concocted love triangle is inexcusable. If you’re looking for a Taiwanese love movie, you’ll be better served with a You Are the Apple of My Eye DVD.

(Many half-baked and pretend ideas surround this unfulfilling love story. It’s the atrociously awful chemistry between the main characters that kills the movie, though) 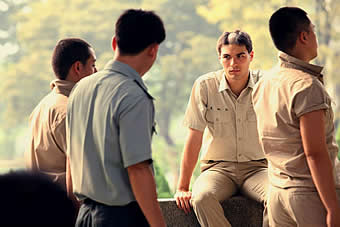 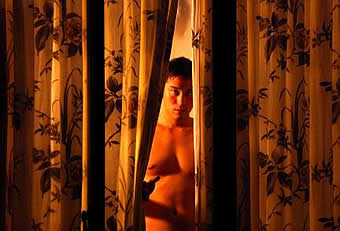