Synopsis: The Wedding Diary tells the story of a couple, Daniel and Tina (played by Aniu & Elanne Kwong respectively) who decides to get hitched. Daniel is an engineer working in Singapore, who comes from a humble Hokkien Malaysian family, while his wife-to-be Tina, comes from a well-to-do Cantonese Singaporean family. What follows the happy decision to tie the knot is a series of problems involving both families - the disparity in perceived wealth and the countless differences between Singaporean and Malaysian, Hokkien and Cantonese cultures, such that preparations for the wedding almost come to a standstill. In a show of sincerity and commitment to his demanding parents-in-law to be, Daniel agrees to hold an extravagant and lavish wedding banquet in Singapore.

On the wedding day, Daniel discovers that most of the red packets he has planned to use to foot the bill have gone missing! Out of desperation, he heads to the nearby casino to try his luck and ends up losing more money. As he makes up one lie after another to cover up his problems, Tina starts to have suspicions about his fidelity and honesty. He quarrels with his father over the wedding arrangements and in a pique, his father leaves Singapore only to meet with a car accident on the way back to Penang. The happiest day in Daniel’s life is suddenly unfolding into what could be the most depressing… or is it?.

We are not going to pretend that this is a high brow movie. With so many sponsor logos staring at you on the movie poster, you weren’t expecting this Adrian Teh directed romance comedy to be an independent production where protagonists spend much of their screen time discoursing about life and exchanging knowing glances at each other, were you? And with A Niu headlining the movie, you can roughly know what to expect.

After all, the Malaysian singer songwriter actor (and director!) is the one responsible for the wildly popular and infectious tune “Dui Mian De Nu Hai Kan Guo Lai” (direct translation: Look over here, the girl opposite). The artiste known for his kampong boy image is also known to play comical characters, judging by his filmography (Ice Kacang Puppy Love, Homecoming). Here, he plays a Malaysian born engineer working in the Lion City, and thanks to that magical thing called fate, he meets a pretty girl and the two decide to get married. That’s when the story begins – unexpected trouble and circumstances ensue. But we aren’t worried for the protagonist, because a happy ending can be seen miles away before the movie’s finale takes place.

A Niu may be no Louis Koo, Daniel Wu or Shawn Yue, but he exudes a very adorable charisma which will have you rooting for him in his misadventures. One can almost imagine the Penang born whipping out his guitar to break into a quirky folk song about unrequited love. His on screen co star is Hong Kong TVB actress and singer Elanne Kwong (Invisible Target, City Under Siege), who does her job of looking wide eyed and delightfullu sweet as a rich man’s daughter.

The fun begins with the ensemble of supporting cast which includes Shaun Chen and Chris Tong as the protagonists’ best friends (watch out for a truly funny but painful scene where poor Chen’s nipples are, err, plucked during the traditional “grabbing the bride” ceremony), Jack Choo and Kara Hui as Kwong’s well to do but demanding parents (the TV and film veterans are so good in their roles, it reminds you of the good old days when emotions can be conveyed without shouting hysterically), Maggie Theng as a conniving aunt (we were expecting something bitchier from the local singer though), and a surprisingly wonderful Marcus Chin who plays A Niu’s long suffering father (the meaty role is one of the best we’ve seen in regional cinema so far).

While the story of the everyday woes of getting married in Singapore isn’t what you’d call innovative, the 96 minute movie makes it up with a digestibly comfortable pace (beat that, all you self indulgent filmmakers out there) with some genuinely hilarious setups. Watch out for the scene where John Cheng (more affectionately known as Ah Nam) reveals the true identity of a bag of cash, indirectly poking fun at another local director - it got us giggling at the mischievous scriptwriting.

The production values aren’t that bad either. The well executed cinematography comes as a pleasant surprise, with some gorgeous scenes shot in Malaysia. The last third of the production may feel like a commercial for a particular brand of watch, but hey, since it’s the titular sponsor after all. Besides, the way it is weaved into the storyline is, in our humble opinion, well conceived and movingly affective. You may just shed a tear or two, but before you think this is one unnecessary melodrama, the joy and bliss of a married couple kicks in, and it’s one big happy ending for all. 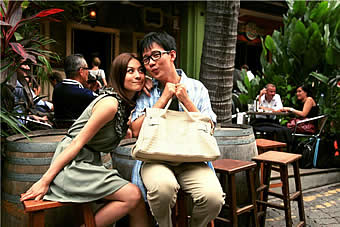 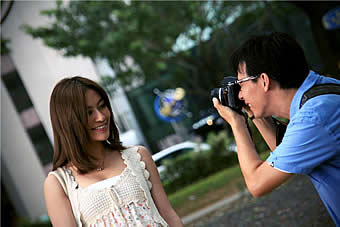 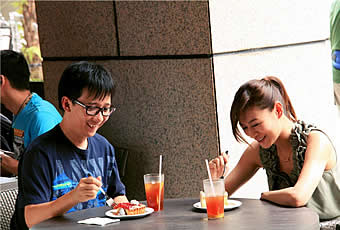 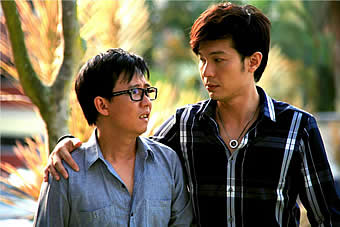