Synopsis: WELCOME TO THE PUNCH is the second feature from Shifty writer-director Eran Creevy and producers Rory Aitken and Ben Pugh. The film focuses on the relationship between detective Max Lewinsky and Ex-criminal Jacob Sternwood, focusing on the moment Jacob’s son is involved in a heist gone wrong, forcing him to return to London from his Icelandic hideaway. This gives Max another chance to take down the man he’s always been after, a man who has humiliated and physically scarred him. With the two men set on an unremitting collision course, they come across a deeper conspiracy that they will both need to solve in order to survive. Written and directed by BAFTA nominated Eran Creevy (Shifty), WELCOME TO THE PUNCH is a crime-thriller shot in and around the modern city-scapes of London including the banking centre of Canary Wharf and the city’s rejuvenated East End. The film stars James McAvoy (X-Men: First Class, Wanted, Atonement, The Last King Of Scotland), Mark Strong (Sherlock Holmes; Tinker, Tailor, Soldier, Spy), and Andrea Riseborough (W.E.), along with Peter Mullan (Harry Potter and the Deathly Hallows, Tyrannosaur), David Morrissey (Nowhere Boy, The Other Boleyn Girl), Daniel Mays (Shifty) and Johnny Harris (The Imaginarium of Dr. Parnassus).

While Hollywood continues its perennial struggle to find new blockbuster ideas that will connect with worldwide audiences, the British film industry has in recent years found its own niche producing gritty crime thrillers. ‘Welcome to the Punch’ is a (pardon the pun) welcome addition to that list, an impressive helming debut for self-professed genre geek Evan Creevy, whose script for the movie found itself atop the 2010 Brit List of the best unproduced screenplays compiled by the industry itself.

There’s no doubt, watching Creevy’s film, why his script was met with such critical acclaim. Pitting a dogged and vengeful renegade detective against a smart and composed criminal mastermind, Creevy demonstrates through the evolving relationship between his two protagonists that he is fully in tune with the macho sensibilities of the crime genre. This is the kind of pairing that Michael Mann made formula with Al Pacino and Robert de Niro in ‘Heat’ and once again with Tom Cruise and Jamie Foxx in ‘Collateral’, and Creevy plays it just right here.

As acted by James McAvoy, the hard-boiled cop Max Lewinsky, who is still physically and psychologically scarred from a bullet to the knee inflicted by his bitter enemy Jacob Sternwood, is visibly bitter but always understandably so. On the other hand, Mark Strong’s Jacob is never less than Max’s intriguing foil, charismatic and brilliant but surprisingly measured even in his ruthlessness. Assisted by McAvoy and Strong’s solid performances, Creevy’s design of his characters’ feud is consistently gripping to watch, even more so when they are forced to become allies against a larger common enemy in the last third of the film.

Clearly inspired by other similarly-minded thrillers, Creevy throws some political intrigue into the mix, painting a shadowy conspiracy that involves the higher echelons of the police force and the Home Secretary who is currently seeking re-election. There’s little doubt that Max’s chief, Geiger (David Morrissey), is somehow involved in it all; nonetheless, what this late twist lacks in originality, Creevy makes up for in terms of atmosphere, keeping a taut rein on the proceedings as the unlikely partners take on the powers that be.

The same can be said of the entire film in fact, which Creevy shoots with a stylised intensity that does not let up. Right from the opening frame, he establishes a sleek visual palette swathed in blues and greys, evoking a cooler than cool feel to its London’s East End locations - in particular, the business district of Canary Wharf. He also does a surprisingly impressive job with the gun battles - one within a night club and the other around the compound of a container yard - which pulse with excitement as much as the rest of the movie does with verve.

If there is but one gripe, it is that there could be more of the dark humour which characterises one of the standout sequences of the film. Also featuring a brief performance by veteran acclaimed Brit actress Ruth Sheen, it injects a dash of levity into the general solemnity with a tense but darkly humorous standoff between a singularly-minded soldier (Johnny Harris) and the three men holding his mother (Sheen) hostage. And oh, we might add too that it does end with a John Woo-esque slo-mo gunplay that differentiates it from the rest of the action.

But despite borrowing openly from Woo to Mann to even Christopher Nolan’s ‘Dark Knight’ trilogy, Creevy’s sophomore feature film never feels like a foolish amalgamation of different styles; rather, it builds on these influences within a distinctively British setting, and like Creevy’s own 2008 debut ‘Shifty’ is all the better for it. It won’t become a classic for sure, but ‘Welcome to the Punch’ is still a fine example of the craft of British filmmakers in the crime genre - after all, the fact that Ridley Scott is executive producer should mean something.

(A sleekly cool British crime thriller that won’t win points for originality, but still packs a potent punch in style and atmosphere to satisfy genre fans) 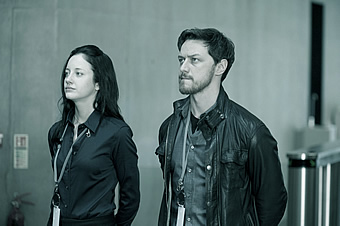 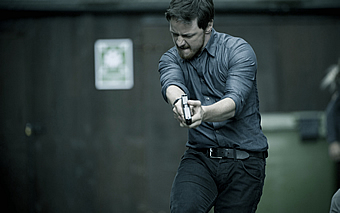 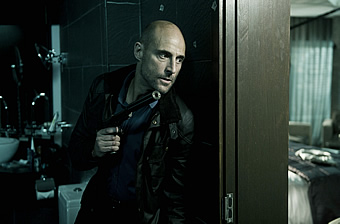