Synopsis: In “Red Riding Hood,” Seyfried plays Valerie, a beautiful young woman torn between two men.  She is in love with a brooding outsider, Peter (Shiloh Fernandez), but her parents have arranged for her to marry the wealthy Henry (Max Irons).  Unwilling to lose each other, Valerie and Peter are planning to run away together when they learn that Valerie’s older sister has been killed by the werewolf that prowls the dark forest surrounding their village. For years, the people have maintained an uneasy truce with the beast, offering the creature a monthly animal sacrifice.  But under a blood red moon, the wolf has upped the stakes by taking a human life.  Hungry for revenge, the people call on famed werewolf hunter, Father Solomon (Gary Oldman), to help them kill the wolf.  But Solomon’s arrival brings unintended consequences as he warns that the wolf, who takes human form by day, could be any one of them. As the death toll rises with each moon, Valerie begins to suspect that the werewolf could be someone she loves.  As panic grips the town, Valerie discovers that she has a unique connection to the beast—one that inexorably draws them together, making her both suspect…and bait.

In Catherine Hardwicke's "Red Riding Hood", the tone goes darkly dreamy. Not that the fairy tale it's based on doesn't already have its fair share of undertones but the whiff of sexual earnestness gets angsty and its facade as a hip re-imagining of its innocuous source material gets revealed for what it is: "Twilight" in full-on werewolf mode. With a sexy soundtrack of Fever Ray punctuating rolls in the hay and make-out sessions, the film looks firmly onto a teenage audience to fill its coffers given how weak-kneed it is to actually confront any semblance of true horror.

Neil Jordan's 1984 re-telling of the fairy tale, "The Company of Wolves" approaches the psycho-sexual themes inherent in the material to better and haunting measure. And who can forget the truly unique and energetically fervent "Freeway" in which Kiefer Sutherland and Reese Witherspoon play the wolf and Little Red respectively -- how wonderfully crafted that film was in bringing into a modern world, showing how reworking it into a contemporary context isn't just all fluff. And you get a sense that "Red Riding Hood" initially attempted this sort of deep introspective look into the mythology and the foreboding milieu of a town deep within an enveloping wilderness but just loses itself in adhering to a formula of teenage love triangles, familial discords and shirtless hunks glistening in the moonlight.

In the medieval fantasy village of Daggerhorn, sacrifices of pigs and livestock are made each full moon to appease the werewolf that prowls the woods surrounding them. But when a young woman is killed, the men of the village decide to rebel, heading up onto a cave they believe the werewolf dwells and bringing home a wolf's head on a pike. Father Solomon (Gary Oldman), an expert werewolf slayer and overall puritan evil-hunter, tells them that the werewolf would return to human form when dead. The gorgeously red-lipped Valerie (Amanda Seyfried), sister of the slain woman, steps into the picture as a young woman caught between her betrothed fiance, the rich Henry (Max Irons) who her parents want her to marry and the woodcutter (Shiloh Fernandez), who she wants to be with. This burgeoning sexual awakening is short-lived however, when Valerie is given reason to suspect that one of her suitors might just be the werewolf in disguise.

Hardwicke juggles treacherously ludicrous red herrings to keep Valerie from finding out the true circumstances and identity of the murderer. She visits her dear demented grandmother (the fabulous Julie Christie) and learns deep dark family secrets, revealing her own connection to the plot. The essential elements of the fairy tale are here but it's a wholly whodunit and wholovesme affair. If there's one thing to be said for the film though, it's how lush and inviting it all looks on the big screen. Despite its many failings as a motion picture, Hardwicke hits the mark on that aspect. She creates a great atmosphere on a sound stage in the village scenes and splices that in with sweeping aerial shots of the breathtaking and isolating wilderness that sets the film up for so much more than it actually is.

There's a deep dissatisfaction in the film given how polished it looks and how much promise it holds. The lack of gore, sex and true tension is regrettable in how tepid and mediocre its aspirations ended up being but at least there's one thing to be gleaned from this relatively new sub-genre of films and books sexualising dangerous, feral men who survive on blood and flesh is that every girl just wants to be eaten. 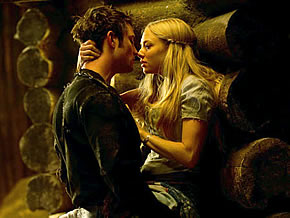 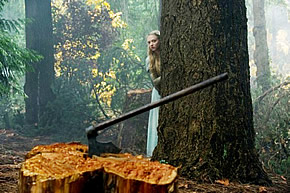 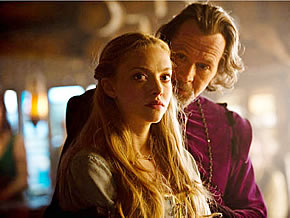 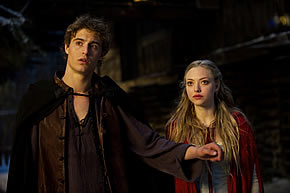