Synopsis: In RED 2, the high-octane action-comedy sequel to the worldwide sleeper hit, retired black-ops CIA agent Frank Moses reunites his unlikely team of elite operatives for a global quest to track down a missing portable nuclear device. To succeed, they'll need to survive an army of relentless assassins, ruthless terrorists and power-crazed government officials, all eager to get their hands on the next-generation weapon. The mission takes Frank and his motley crew to Paris, London and Moscow. Outgunned and outmanned, they have only their cunning wits, their old-school skills, and each other to rely on as they try to save the world-and stay alive in the process.

Defying conventional Hollywood logic, ‘Red’ (or short for ‘Retired: Extremely Dangerous’) cast a bunch of actors all above the age of 50 as aging spies forced back into action when their lives are threatened by the very agencies they used to serve. And yet, Bruce Willis, Morgan Freeman, John Malkovich and Helen Mirren turned the 2010 risky high-concept movie into a sleeper hit, thanks to a firm tongue-in-cheek sensibility that emphasised the actors’ ages as much as it did the action.

And along with Mary-Louise Parker as Willis’ earlier squeeze and Brian Cox as Mirren’s former love, Willis, Malkovich and Mirren are back for yet another geezers-with-guns action adventure. Even better, the cast list includes the likes of Catherine Zeta-Jones and Anthony Hopkins, the former playing a Russian double agent who used to have the hots for Willis and the latter a daffy Cold War-era nuclear scientist that may or may not have the answers to their latest embroilment into international espionage.

‘Red 2’ is one of those sequels which rewards fans of the original, especially since returning scriptwriters Jon and Erich Hoeber pick up with Frank Moses (Willis) and Sarah (Parker) having settled down into a quiet and routine coupled life. But as ‘Red’ amply demonstrated, the former telephone operator craves for a life of excitement more than the CIA retiree, and so when Frank’s paranoid former partner Marvin Boggs (Malkovich) turns up with yet another conspiracy theory about a Cold War weapons project named Nightshade that just got hot, Sarah jumps at the chance at getting back into action with Frank.

Though initially reluctant, Frank is once again back to doing what he does best when a murderous Pentagon special agent named Jack Horton (Neal McDonough in yet another icy arrogant villainous role) threatens his and Sarah’s life. A surprisingly twisty plot ensues around the madcap vignettes that make up the rest of the movie, with Frank’s former MI6 British counterpart Victoria (Mirren) sent to take Frank and Marvin out and ruthless South Korean contract killer Han (Lee Byung-Hun) recruited by Jack for exactly the same task.

To the Hoebers’ credit, at no point does the busy plot ever come off throwaway, despite of course being the narrative glue for the various globe-trotting setpieces that see our heroes go from Paris to London to Moscow. Every city introduces a new piece of the puzzle, which ultimately proves cleverer than one expects it to be. Ditto for the bevy of characters, each of them with their own distinct quirks to add flavour to the entire package. Yes, though it’s inevitable that some get more screen time than others, every role seems specifically tailored to the actor’s strengths - whether Zeta-Jones’ sultry old flame Katja or David Thewlis’ information dealer ‘The Frog’ or Hopkins’ shifty scientist Edward Bailey with a questionable case of amnesia.

Certainly, the ensemble cast contribute in no small measure to the roster of sprightly characters. Each and every one seem to relish not only the opportunity to work together, but also the chance to play against age and type. Willis keeps his cheeky wink-wink grin throughout, perhaps even more so now that he gets to romance not one but two beautiful ladies at the same time. Malkovich and Parker get some hilarious scenes together, in particular one in which the former is seen alternately exasperated and terrified at the latter’s sheer aggressive driving skills trying to outchase Zeta-Jones at capturing ‘The Frog’ down the streets of Paris. Mirren is once again a standout, absolutely regal portraying a woman with class and steeliness; while Hopkins is perfect as the inscrutably bumbling scientist with more up his sleeve. It’s any director’s dream come true to have such an impeccable cast, even more so when everyone knows exactly what the material expects of him or her.

In that coveted position is Dean Parisot, who takes over from Robert Schwentke by retaining much of the former film’s mix of wry humour and over-the-top action. Obviously benefiting from a larger budget no doubt because of the success of its predecessor, Parisot amplifies the action to more ludicrous heights, with plenty of shootouts, car chases, bomb explosions and Mirren shooting pistols in two directions simultaneously from inside a spinning car. This is the kind of overblown action that characterised the high-octane baby-boomer action comedies of the 80s and 90s, and we suspect that the older audience that this is skewed towards will indeed be having a blast.

But really, with such a game cast of veterans, it’s hard to resist throwing all caution and credibility out the window to simply revel in the kind of cartoonish live-action Hollywood was built and marketed on. Even though what was fresh the first time round feels a bit more familiar now, there is still much fun to be had in the banter and bullets. If summer popcorn fare is built on escapism, then the reunion of ‘Really Entertaining Dudes’ is just that sort of entertainment.

(Returning to the formula of witty banter and over-the-top action, this reunion of aging spies back in action is still plenty of escapist fun) 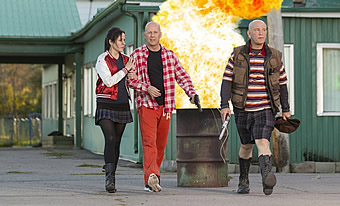