Synopsis:  In the highly anticipated next chapter of the blockbuster The Twilight Saga, the newfound married bliss of Bella Swan (Kristen Stewart) and vampire Edward Cullen (Robert Pattinson) is cut short when a series of betrayals and misfortunes threatens to destroy their world. After their wedding, Bella and Edward travel to Rio de Janeiro for their honeymoon, where they finally give in to their passions. Bella soon discovers she is pregnant, and during a nearly fatal childbirth, Edward finally fulfills her wish to become immortal. But the arrival of their remarkable daughter, Renesmee, sets in motion a perilous chain of events that pits the Cullens and their allies against the Volturi, the fearsome council of vampire leaders, setting the stage for an all-out battle. The suspenseful and deeply romantic Breaking Dawn continues the epic tale of supernatural fantasy and passionate love that has made The Twilight Saga a worldwide phenomenon.

Following in the footsteps of the most successful print-to-screen franchise that recently concluded an epic journey lasting a decade, this adaptation of the final book in author Stephanie Meyer’s groundbreaking ‘Twilight’ series has been split into two parts- and no matter your cynical views of it being no more than a cash-grab attempt by studio executives, the decision to do so is ultimately an inspired one. After all, when the book had been published, some reviewers had commented that Meyer packed too much into one volume and should have instead released it as two separate books.

Screenwriter Melissa Rosenberg makes the split right where it belongs- and this first-parter deals with Bella’s marriage to Edward, their subsequent honeymoon, her treacherous pregnancy and her transformation. The latter should come as no surprise to those who have seen or read any of the earlier films- the Volturi had mandated her ‘turning’ into a vampire when they had spared her life in ‘New Moon’. And if all that sounds foreign to you, then you probably should do some homework before catching this movie, for it doesn’t offer any concessions for the uninitiated.

Fans- to be specific, Team Edward fans- however will be rewarded immediately with the long-awaited moment in the entire saga. It is also a most beautiful one, as Edward and Bella finally seal their love with each other with the covenant of marriage. An entire half hour of the movie is dedicated to their wedding, and director Bill Condon stages the occasion resplendently. More than just elaborate sets, Condon draws out its poignancy through his key characters- the single father Charlie (Billy Burke) entrusting his beloved daughter to Edward; the bride Bella excited yet nervous to begin a new chapter of her life and her love with a vampire; and the bridegroom Edward overjoyed to be married to Bella yet uneasy that their human-vampire nuptials will hurt her.

At the centre of it is Bella and Edward’s immense love for each other, and a scene where the pair exchange their vows looking into each other’s eyes and oblivious to the crowd in front of them is deeply touching. Just as this instalment finally gives Bella and Edward their happily-ever-after, it also gives closure to Jacob’s love for Bella- and Team Jacob fans will relish a slow dance between the two away from the wedding party as Jacob finally comes to terms as best as he can that Bella is not his to have. This will also be the last time we see some of the supporting characters- Jessica (Anna Kendrick), Eric (Justin Chon), Angela (Christian Serratos) and Mike (Micahel Welch)- and Condon takes note to give each some extra screen time before they bid adieu.

It’s clear from how Condon films the ‘wedding of the century’ that he possesses surprising sensitivity for the material- more so than any of the previous directors (David Slade, Chris Weitz and even Catherine Hardwicke), we may add- and that acumen is especially important especially towards the second half of the film. Those who have read the books will know that this final chapter is the most challenging to film of all the four, particularly because it deals with themes like sacrifice, betrayal and death. And leading up to that is the newly married Cullens’ honeymoon in Isle Esme, off the coast of Brazil’s Rio de Janeiro where, Bella and Edward consummate their marriage- their lovemaking scenes filmed as passionately as would be allowed under a PG13 rating.

Bella’s consequent pregnancy sets off a chain of events- afraid that the half-human, half-vampire child will kill her, both husband and wife return to Forks and put up at Edward’s place. At first furious to learn of Bella’s condition, Jacob becomes her stalwart protector after realising that it was her decision to keep the baby, even to the extent of turning against his pack. The film finds its climax with Bella’s delivery, Jacob’s imprinting and finally Bella’s discovery of immortality. These are intriguing proceedings to say the least, far removed from the romantic wrangling between Bella, Jacob and Edward that was the crux of the previous movies.

In the hands of a lesser director, the turn of events could very well descend into farce- thankfully then, this movie has found a masterful helmsman in Condon. He conveys fully the gravity and the severity of the decisions facing the triumvirate- at the core, Bella, whose determination to keep her unprecedented child is literally tearing her apart from inside; on one end, Edward, the father, distraught that his actions could have caused so much pain to the one he so loves; and on the other, Jacob, forced to choose between loyalty and love as his Alpha, Sam (Chaske Spencer), makes clear his intent to destroy the human-vampire creation in Bella.

There is also a newfound urgency to the film permeated with an air of nervous anticipation, brought about by the unforeseen date of Bella’s delivery given the child’s unusually accelerated growth. Never has any of the previous ‘Twilight’ films been as pacey, and gone are the chunks of unwieldy exposition that have often leadened its predecessors, substituted with brevity and punch in both dialogue and action. Condon also skilfully tackles the trickier aspects of the film- in particular, Bella's excruciating childbirth through soft dissolves and closeups. Indeed, Condon has made a film that is gripping, a quality that many would agree none of the earlier films are associated with.

That this instalment is so mesmerising is also thanks to Kristen Stewart, who makes Bella’s every emotion keenly felt that runs the gamut from joy, trepidation, anxiety, distress and above all quiet and resolute determination. Robert Pattinson has arguably less to do here, his character powerless to offer Bella any reprieve from the threat within her- but his earlier scenes with Stewart have a sparkling chemistry that effortlessly expresses the attraction between their characters (and of course, the real-life couple). As for Lautner, save for an opening scene that sees him running off into the woods upon receiving Bella and Edward’s wedding invitation, the actor gets to act with his shirt on but (and we’re sorry to disappoint his fans) is largely forgettable doing his usual intense brooding routine that’s grown all too familiar from the last three films.

With ‘Breaking Dawn’, Condon has taken the ‘Twilight’ franchise in a new and exciting direction, moving away from the inter-species love rivalry that has characterised the film series so far. It’s about time Bella, Edward and Jacob grew up, so it’s gratifying to see that they are here dealing with more mature and therefore more complex ramifications arising from their human-vampire marriage union. Let it also be known that this isn’t the teenage version of ‘Underworld’, the action scenes sparse and present only to complement the human (or as human as it gets) drama- though a coda in the middle of the end credits that hints at the Cullens’ impending showdown with the Volturi suggests that part two will be more action-packed.

Not only then has ‘Twilight’ decided to go out the way ‘Harry Potter’ did in two parts, but it is also doing so the way the ‘Potter’ films have- with every successive instalment better than the last, and ‘Breaking Dawn’ marks the best in the series. Easily the most emotionally satisfying of any of the films so far, it also ends on a thrilling high, leaving you with bated breath for the concluding film due one year later.

(The most romantic and emotionally thrilling chapter by far, ‘Breaking Dawn- Part I’ is also the best in the series) 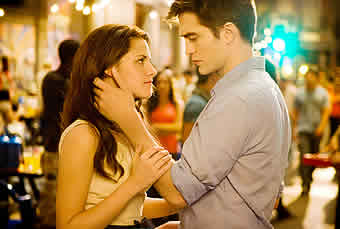 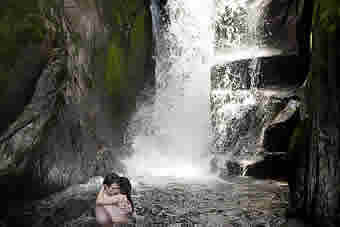 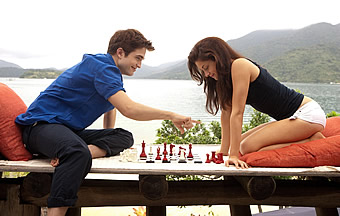