Synopsis: In this hilarious, adventurous buddy comedy for audiences of all ages, directed by Jimmy Hayward (Horton Hears a Who!), two turkeys from opposite sides of the tracks must put aside their differences and team up to travel back in time to change the course of history - and get turkey off the Thanksgiving menu for good.

Thanksgiving isn’t a big occasion this side of the world, but even those with a most rudimentary knowledge of it will know that turkeys – lots of them – are consumed on that very day (preferably with cranberry sauce).  ‘Horton Hears a Who’s’ Jimmy Hayward’s ‘Free Birds’ plays on that holiday tradition by imagining the unlikely scenario where an independent-minded turkey unwittingly teams up with a plucky (pardon the pun) member of his species to go back in time and reverse the establishment of that tradition.

Like many such tales, our hero Reggie (Owen Wilson) is an underachiever who is looking for something more in his existence beyond being just another member of his species. So while the rest of the turkeys on the farm are immediately lured by food in the farmer’s hand and think by extension that he is their friend, Reggie is all too aware that the farmer only intends to fatten them up so he can slaughter them - and no, he also isn’t deluded that they will therefore end up in ‘turkey heaven’.

Reggie’s journey starts when he is chosen among millions of his ilk to be pardoned by the President of the United States and sent to a protected reserve. Unfortunately, it is also at that place where he meets Jake (Woody Harrelson), the President - and we might add, only member - of the Turkeys Liberation Front who claims he is answering a calling from the Great Turkey that visited him years ago to go back in time to the first Thanksgiving and stop turkeys from becoming the holiday meal. It’s a classic case of mismatched partners, but thanks to some witty lines from Hayward and his co-scripter Scott Mosier, there is still some amusement to be had amidst the familiarity.

It isn’t just make believe though - there is indeed a time machine to be found in the Government lab that Reggie and Jake break into, and with that, an actual time travel to the year1622. Oh, and did we mention that in between the mission of saving his species, Reggie finds additional motivation in the form of a love interest? That’ll be Jenny (Amy Poehler), courageous where Reggie is terrified and altogether too attractive for the glib-tongued Reggie to resist.

As far as toons go, this one hardly pushes the narrative limits of imagination. You can almost predict that Reggie will be confronted with a crucial turning point whether to stay with his flock or return to the comfort of his old life back at the reserve - and for that matter, if he will rise to the occasion to be a better fowl. In fact, Hayward demands a fair bit of suspension of belief by playing it fast and loose with the conundrums of time travel, especially as he and Mosier try to make the disparate events across time and space tie together into one coherent whole. We warn you - it doesn’t take anyone with more than a bird brain to tell that they are clutching at straws, so you’d be advised to simply accept the creative liberties they take with logic and just plain common sense.

To his credit, Hayward does a pretty fine job with the animation. The detail can’t quite match up to established studios like Disney/ Pixar and Dreamworks, but this maiden effort from Reel FX Studios is colourful, energetic, and still visually captivating stuff to keep the young ones glued to their seats. Everything also moves at a pretty fast clip, and even if it does rely on familiar plot and character tropes, at no point does it get boring or repetitive. Hayward also has to thank his enthusiastic voice cast for that, in particular Wilson and Harrelson deliver their respective parts with much gusto.

And so even though Thanksgiving as a holiday doesn’t quite resonate as much here as it does in the United States, the humour, fun and excitement that it offers for kids and less demanding adults is universal. The best reassurance we can give is that it isn’t a ‘turkey’; in fact, despite being entirely formulaic, it still is an entertaining diversion for families, especially for those looking for a cinematic equivalent of a babysitter.

(Even though it doesn’t quite take you on flights on imagination, this briskly paced action adventure still moves fast enough on the ground to be an entertaining diversion) 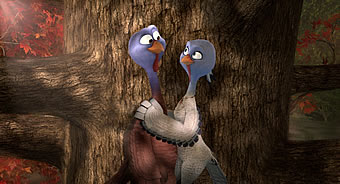 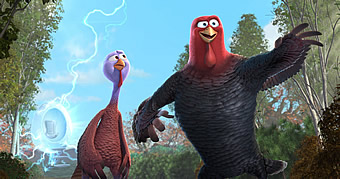