Synopsis: Audiences everywhere are in for a Smurfy good time as the Smurfs make their first 3D trip to the big screen. When the evil wizard Gargamel chases the tiny blue Smurfs out of their village, they tumble from their magical world and into ours – in fact, smack dab in the middle of Central Park. Just three apples high and stuck in the Big Apple, the Smurfs must find a way to get back to their village before Gargamel tracks them down.

Before James Cameron introduced us to a community of blue people called the Na’vi, a certain Belgian cartoonist called Peyo had already charmed a whole generation of children growing up in the 1980s with his creation of ‘three apples high’ blue-skinned creatures with white pants living in mushroom-shaped houses deep in the woods. They were called ‘The Smurfs’, and though they first made their appearance way back in 1958, your memory of them is likely to be from the popular Hanna-Barbera Saturday morning cartoons.

And thanks to the success of fellow 1980s animated creation ‘Alvin and the Chipmunks’, the Smurfs are getting the live-action/ animated treatment on the big screen. For that, they are making a journey from their magical village to our world- or more precisely, the Big Apple- where they will meet TV star humans like Neil Patrick Harris (How I Met Your Mother), Jayma Mars (Glee) and Sofia Vergara (Modern Family). A magical portal is their mode of transportation, through which their nemesis, the evil wizard Gargamel (Hank Azaria), follows hot in pursuit.

After making the trip to New York City, the Smurfs spend the rest of their time trying to reopen the portal to get back to their home while evading the clutches of Gargamel, who is intent on capturing them and using their essence (e.g. snippets of hair) for his magic. Luckily, they won’t be alone- Harris’ cosmetics company marketing executive Patrick Winslow and his pregnant wife Grace (Mars) will come to their assistance, and in the process learn the importance of placing family first.

Of course, as formula would have it, Patrick will need some time to come around to their presence, particularly because he’s been given a very important assignment by his boss at work and the Smurfs with their infectious- annoying or otherwise- tune aren’t what you would call work-conducive. It took four writers (J. David Stem, David N. Weiss, Jay Scherick and David Ronn) to come up with the script, but the plot that comes as uncomplicated as it sounds above is really paper-thin.

The simplicity of the storytelling allows director Raja Gosnell to focus his audience’s attention on each of the six Smurfs sucked through the portal- Grouchy (George Lopez), Brainy (Fred Armisen), Clumsy (Anton Yelchin), Gutsy (Alan Cumming), Smurfette (Katy Perry) and not forgetting Papa Smurf (Jonathan Winters)- and the film’s seamless blend between CGI and live-action is testament to Gosnell’s craft honed from directing movies like ‘Scooby Doo’ and ‘Beverly Hills Chihuahua’. That experience has also led him to be well attuned to the attention span of kids, so he moves the film along with a brisk lively pace that will keep them engaged.

Juvenile though it may be, there is still a fair amount of fun to be had from watching the Smurfs banter and bicker with each other. Gosnell has assembled a wonderful voice cast, and the chemistry between the actors shines through in their well-timed comedic repartee. The script’s insistence on substituting every possible noun, verb and adjective with ‘Smurf’ is amusing at times and ingratiating at others, but there are also flashes of slightly more adult wit- such as when the Smurfs find themselves again blending in with the blue around us (e.g. Blu-Ray ads, Blue Man Group posters and Bluetooth appliances); or when Gutsy joins Smurfette in a Marilyn Munroe moment atop a subway grate.

Mostly though, the film is well aware that it is able to get away with its pratfalls, potty humour and kid-friendly slapstick- and true enough, the kids in our screening were chuckling away at the childish antics. Still, there’s an undeniable sweetness to the Smurfs, endearing and adorable no matter their personalities reflected so plainly through their names. Like ‘The Chipmunks’ unfortunately, it rests too easily on the charms of its characters to get by- but even as unambitious as it is, this Smurfs outing is not without its appeal, and the fact that their kids love it is probably reason enough for some adults to like it as well. 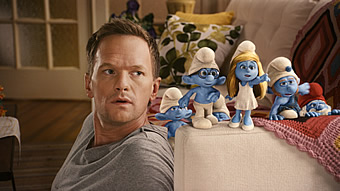 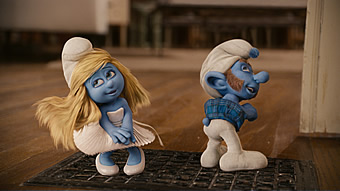